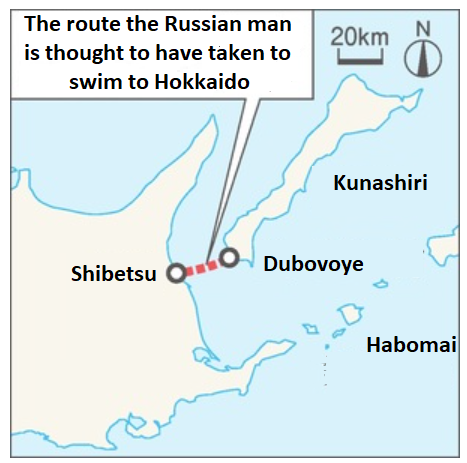 On Aug.19, a Russian man living on Kunashiri Island in the Northern Territories appeared in Shibetsu Town, Hokkaido, it has been learned from interviews with people concerned. Shibetsu is about 20 km away from Kunashiri across the Nemuro Strait. That same day, the man was taken into custody in Shibetsu Town by the Hokkaido Police and transferred to the Sapporo Regional Immigration Services Bureau. RIA Novosti reported that reliable sources said “it seems he swam across the strait wearing a wetsuit.”

According to RIA Novosti, the man is reportedly seeking asylum in Japan. The Consulate General of the Russian Federation in Sapporo is in contact with the Sapporo Regional Immigration Services Bureau. The Bureau told the Consulate General that it is “endeavoring to determine the nationality and identity [of the individual] at this stage.”

According to what the Yuzhno-Kurilsky District government of Sakhalin Oblast told Interfax, the man is around 40 years old and is from Izhevsk, [the capital city] of the Udmurt Republic in the Ural region. He apparently moved to Kunashiri Island three years ago. Izhevsk is known for producing Kalashnikov automatic rifles.

The Yuzhno-Kurilsky district government has jurisdiction over Kunashiri Island on the Russian side.

The man reportedly obtained land in the Golovnino district (Japanese name: Tomari) through a system that provides one hectare of land in Russia’s Far Eastern Federal District to applicants free of charge. The Golovnino district is the southernmost part of Kunashiri Island and is the closest point on the island to Shibetsu Town.

The man reportedly was living in Dubovoye Village, which is 42 km south of Yuzhno-Kurilsk (Japanese name: Furukamappu), the administrative center of the Yuzhno-Kurilsky District, and he worked occasionally as a tractor driver.

A district government official told Interfax: “The man went missing and was suspected of disappearing on Aug. 17, so [authorities] searched his house. They found posters of Japan [during the search]. He loved Japanese culture.” “He disappeared and appeared in Shibetsu near Nemuro on Aug. 19 and was taken into custody,” the official said.

[Additional information from a Hokkaido Shimbun digital article released at 8:26 a.m. on Aug. 22: According to Japanese government sources, the man is 38 years old, has a Russian driver’s license and he has indicated the intent to seek asylum in Japan, although he has given repeatedly shifting reasons.]