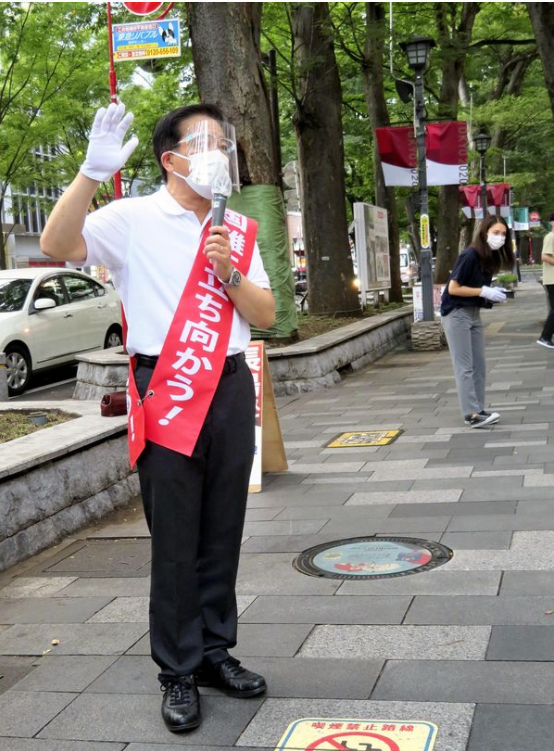 The Yomiuri Shimbun Liberal Democratic Party lawmaker Akihisa Nagashima gives a street speech with a mask and face shield on in Fuchu, Tokyo, on Friday.

With two months left before the expiration of the terms of House of Representatives members in October, lawmakers are gearing up for the next lower house race as the pandemic continues to restrict their activities.

Increasingly alarmed by the languishing approval rating for Prime Minister Yoshihide Suga’s Cabinet, the Liberal Democratic Party is desperate to shape up its local chapters ahead of the lower house election. The Constitutional Democratic Party of Japan (CDPJ), on the other hand, is taking a bullish stance toward fielding enough candidates on its own to secure a majority of the 465 seats in the chamber.

■ Hidden behind a mask

With a mask and face shield on, former State Minister of Defense Akihisa Nagashima was giving a street speech in front of a shopping mall in Fuchu, Tokyo, on Friday evening. The LDP member plans to run for election in Tokyo Constituency No. 18.

“The one and only way to overcome this pandemic is to make the vaccination rollout more widely available,” said Nagashima.

He wore a white glove on his right hand to safely fist-bump supporters.

“I find it quite difficult that more than half of my face is covered when I have to make myself better known to voters, but then if I were to make passersby worried about infections, it would ruin everything,” he said.

Former State Minister of Defense Akira Sato, an LDP member representing Osaka Constituency No. 2, continues to visit his supporters, but he said he tries to stay in any one place for just a short time due to measures against the novel coronavirus.

“I don’t like imagining that some people may get the wrong idea and think I’m leaving too soon after visiting them just for form’s sake,” he said.

To prepare for the lower house election, the LDP spent about a month from July holding meetings with executives of its prefectural chapters in eight locations across the nation. Officials such as Taimei Yamaguchi, chairperson of the party’s Election Strategy Committee, exchanged opinions with local chapter executives and shared issues with them.

The last of the meetings was held in Sendai on Thursday for party chapters in the Hokkaido and Tohoku regions.

Itsunori Onodera, chairperson of the Party Organization and Campaign Headquarters, said at the meeting, “We must endure the headwind and defend our number of seats at all costs.”

A number of experienced LDP members have announced their retirements from politics one after another. As a result, the party at one point had no candidate to field in more than 15 constituencies. Nonetheless, the LDP managed to arrange possible candidates to take over some constituencies, reducing the number of vacant constituencies on its slate to only seven.

In Ishikawa Constituency No. 1, Hiroshi Hase, a former education, culture, sports, science and technology minister, has already decided not to run in the next lower house race as he plans to make a run for Ishikawa governor. On Friday, he met with Yamaguchi at the party headquarters and reported that he had requested Deputy Chief Cabinet Secretary Naoki Okada to run as his successor.

Meanwhile, the CDPJ is prepared to field 211 of its own candidates in single-seat constituencies. Combined with those backed by the Democratic Party for the People and the Social Democratic Party, the number of candidates to be fielded by the three opposition parties will total 236, or a majority in the lower house, meaning it has enabled the main opposition party to clear its initial goal in terms of seats to be contested.

CDPJ Leader Yukio Edano views the downward trend of the approval rating for Suga’s Cabinet as a good opportunity for his party, which continues to work toward fielding even more of its own candidates.

“We should field enough candidates on our own to secure a majority in the lower house; this is what the main opposition party was supposed to be,” Edano said.

However, the CDPJ still needs to make a decision about candidate adjustments in the 69 constituencies where CDPJ and JCP candidates are expected to contend.

“It’s impossible to unify candidates in all the constituencies systematically and also from the standpoint of each party,” Edano said at Wednesday’s press conference, leaving it unclear how the talks between the two parties will progress.

Edano has canceled all of his business trips to places including Kyoto and Aichi prefectures, which had been scheduled for this month, as more prefectures are now under a state of emergency. The CDPJ leader had aimed to shore up lawmakers and other possible candidates with a weak support base in their electoral turfs. A senior party member expressed frustration with the situation, saying, “We haven’t been able to take advantage of this great opportunity.”

Under these circumstances, Edano has shifted into high gear in the effort to find supporters online. He was to appear on a livestreamed program Saturday with Secretary General Tetsuro Fukuyama and Executive Deputy Leader Renho to promote the party’s COVID-19 measures and the differences in its policies from those of the Suga administration.