TOKYO — Total inventory at the world’s nine leading chipmakers hit a record high of $64.7 billion as of the end of June, as companies quickly move to ramp up production to alleviate a protracted shortage that has disrupted supply chains in the auto industry and beyond.

Digitization and the rise of fifth-generation wireless have turned chips into an indispensable component across industry lines, while the coronavirus pandemic has forced many chipmakers to suspend production in Southeast Asia. Chipmakers have struggled to keep up despite a mad rush to expand capacity.

Demand for use in high-performance computers and automobiles outpaced projections, said Taiwan Semiconductor Manufacturing Co. CEO C.C. Wei. The world’s largest chipmaker optimized production lines in January-June, expanding production of automotive chips during the period by 30% from a year earlier.

The global semiconductor shortage also extends to those required in new chipmaking equipment. “I would expect that we will see a supply-constrained environment for the vast majority of next year,” Nvidia CEO Jensen Huang said in a Wednesday earnings call. Nvidia contracts out the chipmaking process to outside foundries.

Total inventory at TSMC, Intel, Samsung Electronics, Micron Technology, SK Hynix, Western Digital, Texas Instruments, Infineon Technologies and STMicroelectronics are now at historic highs, as chipmakers expand their stockpile of raw materials to drive production. The share of raw materials in total inventory has steadily been increasing since March 2019 at the seven companies that provide comparable data, and topped 24% as of the end of March.

Meanwhile, finished chips have flown off the shelves. The turnover rate usually falls when total inventory increases. But sales have been growing faster than inventory, and the April-June quarter saw a turnover rate of 7.8, the highest in 18 months. 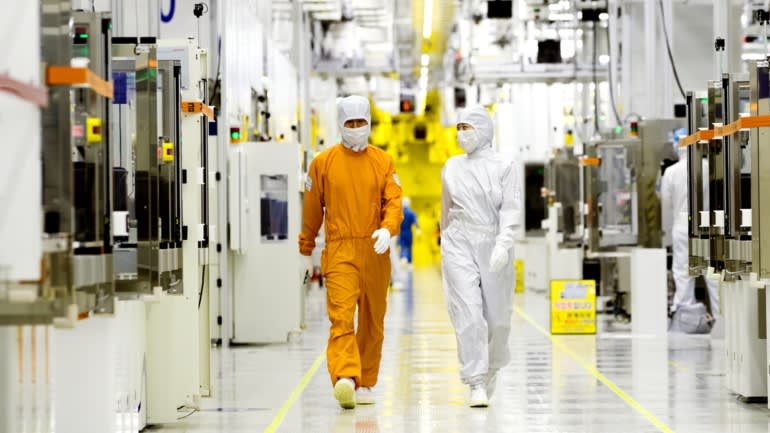 Still, there is concern that growing inventories are not necessarily an accurate reflection of actual chip demand.

For example, many automakers are now shifting away from the just-in-time strategy — or holding as little parts inventory for as short a time as possible — to holding spare inventory in case of supply chain disruptions.

Electronic equipment maker Fujitsu General had also increased its inventory of chips and other components and materials by about 20% in three months as of the end of June.

“We are securing more components even if it means a larger inventory in case the semiconductor shortage drags on,” said Vice President Hiroshi Niwayama.

Chipmakers worry that these developments could lead to a glut down the line.

“We have an order book that represents approximately two years of revenue,” said Helmut Gassel, chief marketing officer at Infineon Technologies. “We expect there to be some double ordering, which is, as always, impossible to quantify.”

Signs of a slowdown have already emerged in memory chips, where three key producers including Micron Technology and SK Hynix have reported a steady decline in inventory.

The bulk price of 4GB DDRs, which serve as a benchmark for dynamic random-access memory used in computers, roughly stayed flat for the second straight month in July at around $3.20 per chip. Global shipments of smartphones, which require memory chips, also fell markedly in April-June.

“The supply of memory chips will likely surpass demand in the first half of 2022, bringing prices down,” said Akira Minamikawa at research company Omdia. Samsung and Micron’s stock prices plunged this month as investors brace for an eventual correction in the chip market.

Still, leading chipmakers continue to rake in big bucks. The top 10 players by market capitalization booked $30.3 billion yen ($276 million) in net profit in April-June, an increase of about 60% on the year and their sixth straight quarter of gains.

They are also pursuing major expansions, largely in logic chips. TSMC plans to make $100 billion in capital investments over three years. Intel has announced plans for a new $20 billion plant in Arizona.

But the chip industry has experienced major fluctuations in the past, saddling manufacturers with excess capacity built up during boom years once the market cools down. Expansions currently underway will go online in two to three years, meaning they may end up dragging companies down.