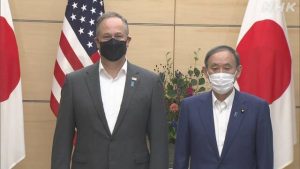 Nikkei and Yomiuri wrote that Second Gentleman Douglas Emhoff, who is visiting Japan to lead Team USA at the opening ceremony of the Paralympics, met with Prime Minister Suga at the Kantei on Tuesday. Yomiuri wrote that Suga expressed Japan’s appreciation for the United States’ assistance in evacuating Japanese embassy staff from Kabul. The Second Gentleman reportedly told Suga that he looks forward to the athletes’ performances at the Paralympic Games. NHK also reported on the Second Gentleman’s meeting with Suga, saying that the two also discussed Vice President Harris’s ongoing trip to Southeast Asia and the situation in Afghanistan.

Meanwhile, Sankei ran a Washington-datelined profile of Second Gentleman Emhoff, saying that he has been involved in the Biden administration’s campaigns to provide food to children in need and promote COVID-19 vaccination since the launch of the administration. The paper added that this is the first time for the Second Gentleman to make an official visit to a foreign country independently.