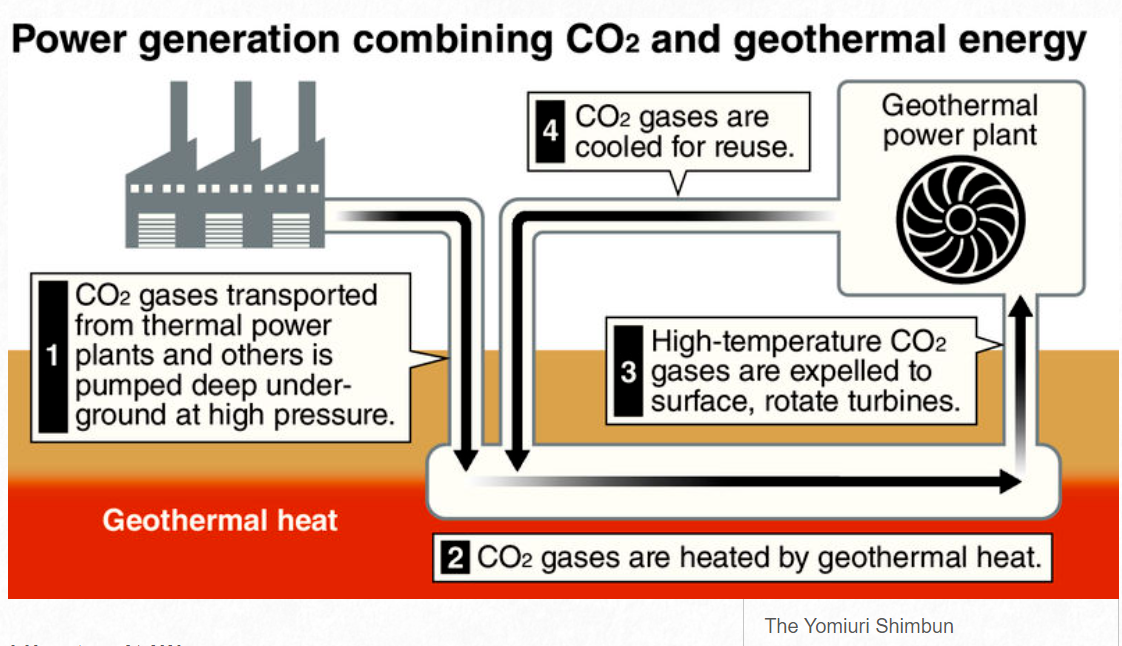 A major Japanese general contractor has plans to begin the nation’s first-ever power generation project that utilizes both carbon dioxide and geothermal energy.

Taisei Corp. aims to design a system in which CO2 gases are pumped deep under ground and heated by geothermal energy, then blown up to the surface and used to rotate turbines.

The company plans to begin commercial operation in 2036 at the earliest, and has been progressing with development of the technology.

The company will apply its “carbon dioxide capture and storage (CCS)” technology, which can store CO2 gases underground and on which it has already conducted verification tests, with the aim of contributing to the decarbonization of society.

Taisei’s system was selected in July as a new development project for thermal power generation solicited by the Japan Oil, Gas and Metals National Corporation (JOGMEC).

Taisei will work on technological development, site selection suitability and other matters over the next five years in cooperation with the Geothermal Energy Research & Development Co., a Tokyo-based company funded by electric power companies, nonferrous metal firms and others.

In the system, CO2 gases discharged from thermal power plants and factories are collected and inserted into underground sites two to three kilometers below ground, mainly in mountainous areas where geothermal energy is stored.

The CO2 gases, which become high pressure and high temperature, are then expelled from underground and used for power generation. The expelled CO2 gases are cooled and reused to generate power.

It is difficult to find suitable locations, and even if one is found, there is a risk of depleting the resources of local hot spring resorts.

The CO2 system has an advantage in that it can be developed with no such restrictions. However, there are still issues to overcome, such as how to transport CO2 gases from thermal power plants and other sources, and how to select ground from which the gases will not leak.

According to the Agency for Natural Resources and Energy, there are 23.47 million kilowatts of geothermal energy resources in Japan, a figure equivalent to the total output of 23 nuclear power reactors and the third largest in the world.

Currently, just 530,000 kilowatts are being produced from thermal power generation, which ranks eighth in the world. Thus, more effective use of geothermal energy can be anticipated.