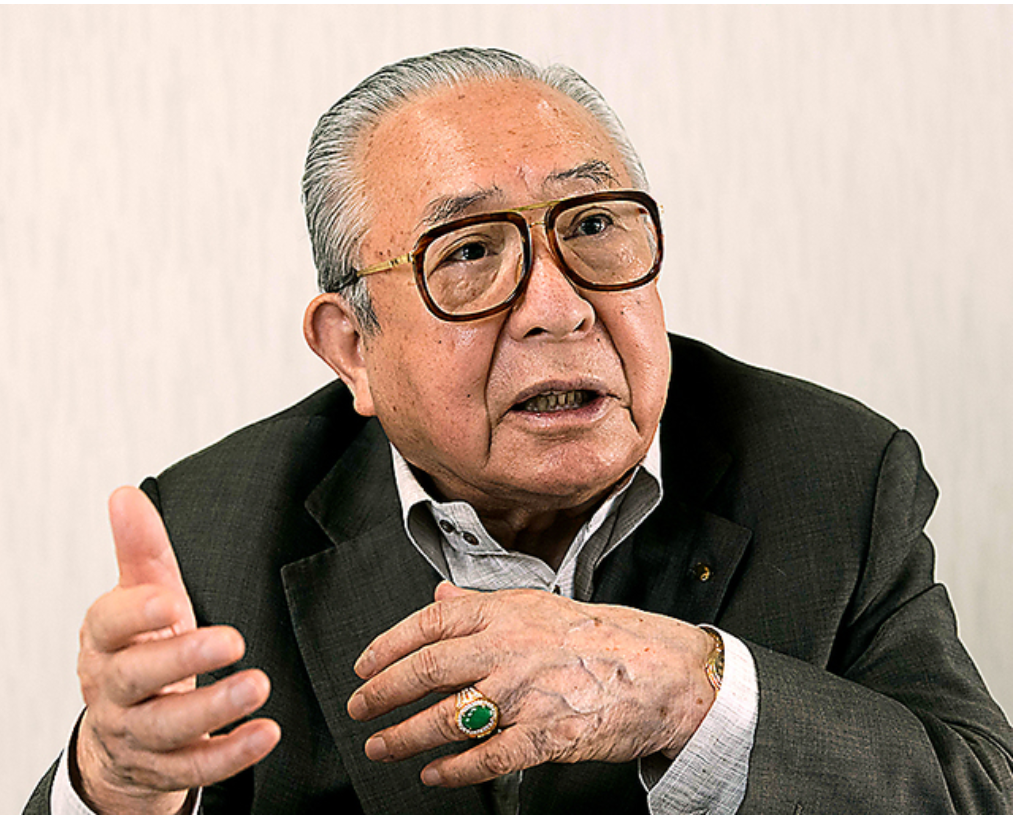 By Oda Makoto and Narabe Takeshi

When the finance ministers of the Group of Seven (G7) industrialized nations met in London in early June, Finance Minister Aso Taro held bilateral meetings with member nations. When the military coup in Myanmar came up in conversation, Aso said: “Our Watanabe can directly talk with (top military commander) Min Aung Hlaing. You can entrust us with Myanmar policy.”

Watanabe has connections in both the ruling and opposition parties. He used to belong to the Liberal Democratic Party (LDP). He was postal services minister and served six terms in the House of Representatives. He also served two terms in the House of Councillors as a member of the now-defunct Liberal Party and Democratic Party of Japan (DPJ). Ruling and opposition party lawmakers are on the board of directors at the Japan Myanmar Association, which Watanabe established in 2012 after retiring from politics.

When the Myanmar military carried out the coup on Feb. 1, Watanabe happened to be in the country. He had traveled to Myanmar in January and met with State Counsellor Aung San Suu Kyi locally for the first time ever. On Feb. 8, one week after the coup, Watanabe met with Min Aung Hlaing, who had taken full control of the country, at the president’s office in the Myanmar capital of Naypyitaw.

When Watanabe opened the door to the reception room on the second floor, Min Aung Hlaing greeted him with open arms and gave him a hug. Then the military leader reportedly said: “We had no choice. Please understand.”

In fact, Min Aung Hlaing met with Watanabe immediately before the coup and complained that last year’s general election, in which Suu Kyi’s National League for Democracy (NLD) won a landslide victory, was “very fraudulent.”

The two have known each other for a decade. A person close to Watanabe says Watanabe and Nippon Foundation Chairman Sasakawa Yohei, who is also deeply involved in Myanmar affairs, are the only Japanese who can directly contact Min Aung Hlaing. Sasakawa serves as Special Envoy of the Government of Japan for National Reconciliation in the Republic of the Union of Myanmar.

The Japanese government has played up its special relationship with Myanmar to the international community, saying that Japan “has special connections with the military.” Japan has kept a distance from Western nations, which have imposed tough sanctions on Myanmar. Watanabe is considered to be one of Japan’s “special connections.”

An official of the Ministry of Foreign Affairs (MOFA) says: “[Watanabe] has gotten in with the [Myanmar] military and has access to things the [Japanese] government does not. He is key [to the government’s ability] to obtain information about the military.” But Watanabe, who is sympathetic to the military, is becoming a burden [to the government] as the number of casualties increases due to the military’s intensified oppression of citizens.

According to a human-rights group in Myanmar, the military has killed 1,009 civilians as of Aug. 21. 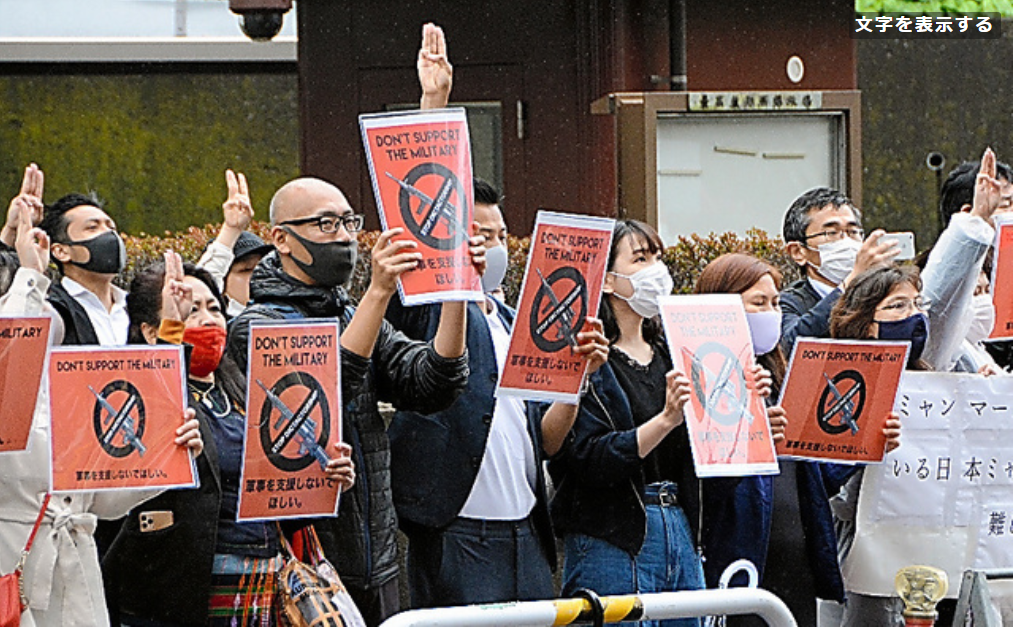 On April 14, some 60 Myanmar citizens living in Japan gathered in Tokyo’s Chiyoda Ward in front of the building that houses the Japan Myanmar Association, which is headed by Watanabe Hideo. “Stop supporting the military!” they shouted in protest against the coup. “Watanabe is [inappropriately] acting as a mediator between Japan and Myanmar,” they said.

This raises the question of how Watanabe has this “special connection.”

According to Watanabe, it all started in 1987 when Prime Minister Nakasone Yasuhiro entrusted him as deputy chief cabinet secretary with the task of overseeing Japanese assistance for Myanmar. Watanabe began to build a network of contacts with the Myanmar military.

After the military cracked down on the pro-democracy uprising in 1988 and the military regime came into power, Watanabe continued visiting Myanmar and got to know Thein Sein, then commander of a military district in the northeastern state of Shan, in the 1990s. Thein Sein was repeatedly promoted within the military and was sworn in as prime minister of the military regime in 2007. He became president after Myanmar shifted to civilian rule in 2011.

In autumn that year, Watanabe met with Thein Sein at the president’s office in the Myanmar capital of Naypyitaw. Watanabe was asked whether Japan was interested in joining a plan to develop a large industrial park in the Thilawa district in the suburbs of Yangon, Myanmar’s largest city.

The next day, Watanabe met for the first time with Min Aung Hlaing, who had become the top commander of the Myanmar military following demilitarization, and asked him whether he had any objections to Japan’s involvement in the development of the Thilawa district, a transportation crossroads. In the years since then, they have developed a friendship and have met more than 50 times, according to Watanabe.

Having gained the military’s consent, Watanabe returned to Japan. He then reportedly lobbied the central figures of the then government led by the now-defunct DPJ and the relevant ministries and agencies and succeeded in having Myanmar’s accumulated debt worth some 500 billion yen written off and paving the way for Japan to resume official development assistance (ODA), which had essentially been suspended under the military regime.

The second administration of Prime Minister Abe Shinzo, which was launched at the end of 2012, pursued a similar Myanmar policy and defined infrastructure exports as one of Japan’s growth strategies. Thanks to a huge amount of Japanese ODA, the Thilawa industrial park opened in September 2015, less than two years after the groundbreaking ceremony. The launch of the Thilawa park led to a surge in the number of Japanese companies entering the Myanmar market, and this quickly resulted in Watanabe’s wielding greater influence. 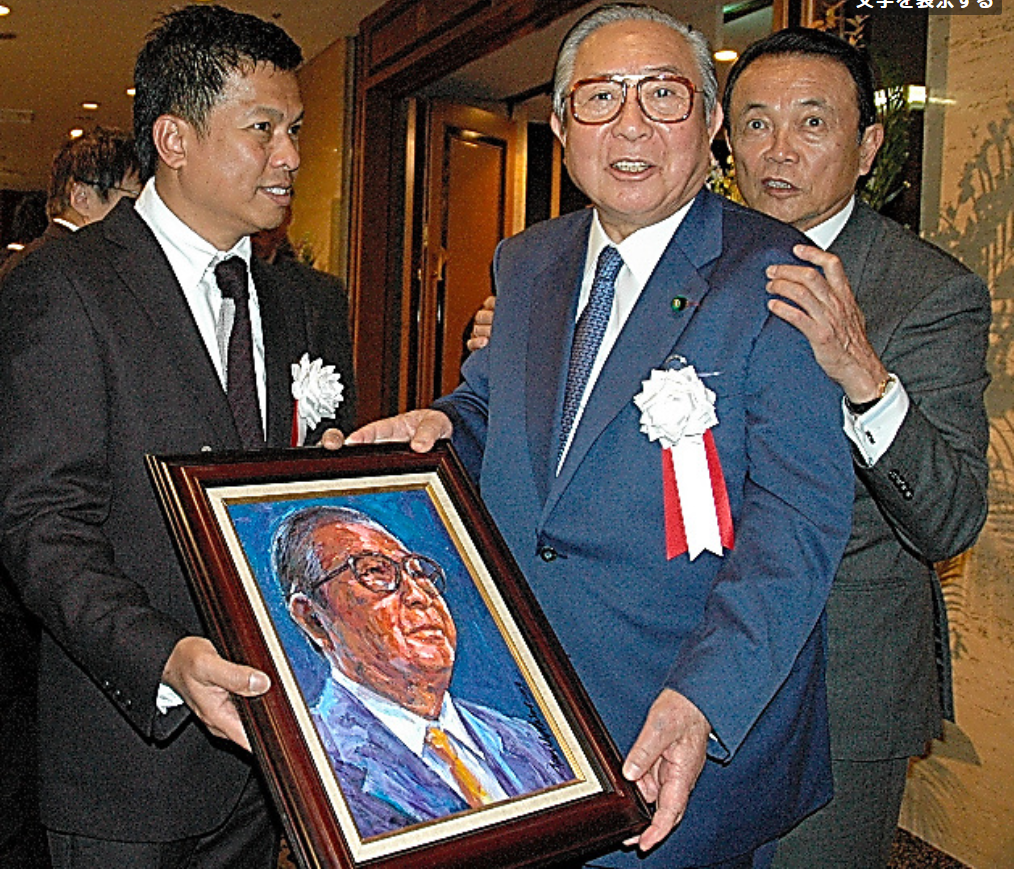 Watanabe Hideo (second from right) receives his portrait from a Myanmar official at a ceremony to commemorate the establishment of a Japan-Myanmar public-private consortium responsible for developing and operating the Thilawa industrial park. Aso Taro is standing to Watanabe’s right. (October 2013)

Watanabe says he was given the responsibility of handling the Myanmar military when he met with Abe and Aso in 2013. But when Aung San Suu Kyi’s NLD rose to power in 2016, Japan turned its diplomatic focus to strengthening its relationship with Suu Kyi and the civilian regime.

According to a senior MOFA official, the Japanese government was seeking to have the Myanmar military release Suu Kyi and then it would encourage the military and Suu Kyi to hold talks.

Tensions were growing in Myanmar. On Feb. 8, Watanabe met with Min Aung Hlaing. Watanabe warned the military leader not to use live ammunition against civilian protesters, and Min Aung Hlaing reportedly responded, “I’m fully aware of that.”

The very next day, however, a female protester was left in critical condition after being shot in the head during a demonstration. (She died on Feb. 19.) That quickly led to a larger protest. According to a senior MOFA official, the Japanese government had emphasized dialogue [with the Myanmar military], saying, “We will leverage Japan’s unique position to strongly urge the Myanmar military to improve the situation.” But Japan was forced to change its strategy at this point.

On the night of Feb. 10, Motegi spoke on the phone with U.S. Secretary of State Antony Blinken and strongly criticized the Myanmar military’s firing on demonstrators. They also confirmed they would urge [Myanmar’s security authorities] to (1) immediately cease violence against civilians, (2) release detainees, (3) and swiftly restore a democratic political system. These three requests later became the basic policies of the Japanese government.

When Watanabe’s role as “mediator” was called into question, a rift developed between Watanabe and MOFA. Although MOFA criticized Myanmar’s latest political turmoil as a “coup,” Watanabe insists, “It was not a coup.”

Amid growing international criticism of the Myanmar military, the Japanese government decided in early March to hold off Cabinet approval of new Myanmar ODA projects that had been planned. This was aimed at urging the Myanmar military to take action, by hinting at the cancellation of ongoing projects.

On March 8, Japanese Ambassador to Myanmar Maruyama Ichiro met with Wunna Maung Lwin, whom the junta had appointed as foreign minister, and made the three requests already agreed between Japan and the U.S.

Watanabe visited Myanmar again in May and remained there until early June. During his stay, he met with Min Aung Hlaing twice. Min Aung Hlaing reportedly said he needed more time to hold a general election and sought Watanabe’s understanding, saying, “We will definitely keep our promise of promoting democratization” and “It takes time to create a voter register.”

Watanabe says, “Min Aung Hlaing will surely and responsibly carry out” the general election the military promised to hold within two years. But there is a strong possibility that “democratization” by the military will be promoted without Suu Kyi and the NLD.

“The people of Myanmar are unlikely to allow an election without the NLD,” comments a senior MOFA official, hinting at the possibility of the Japanese government’s not accepting [election] results.

At a press conference held after a Cabinet meeting on June 1, Motegi was asked by a reporter about Watanabe’s visit to Myanmar, “Has the Japanese government entrusted [Watanabe with something] or requested him to do anything?” Motegi distanced himself from the “connection” by clearly stating, “We have not entrusted him with anything.”

One government insider says “there is nothing we can do.” Japan’s diplomacy that seeks to leverage its special connections is showing no signs of success. More and more Japanese government insiders are expressing their hopes for the mediation by the Association of Southeast Asian Nations (ASEAN).