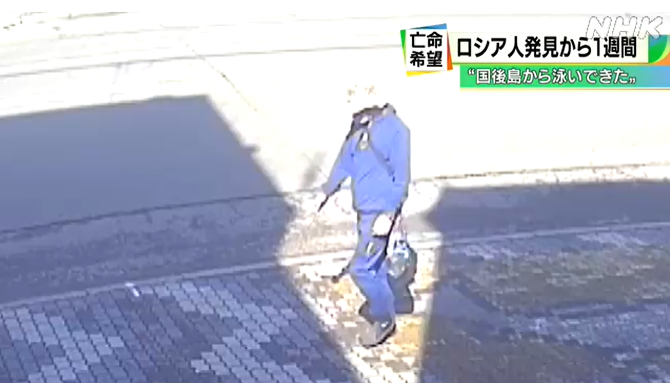 Russian man who “swam” over from Kunashiri (security camera footage)

One week has passed since a Russian man “swam” from Kunashiri Island in the Northern Territories to eastern Hokkaido and was found in Shibetsu Town on Aug. 19. The man has requested asylum, and the Sapporo Regional Immigration Services Bureau is still ascertaining the facts of the situation and considering how to handle the request.

The man was captured on security camera footage in Shibetsu Town at around 8:00 a.m. on Aug. 19. He was then seen buying beverages and clothing at a mass retailer in Shibetsu at around 9:30 a.m. At around 5:00 p.m. on same day, a resident of the town found the man in front of a police box. Because the police officer was out, the resident spoke with the man, and the man reportedly explained that he had swum over from Kunashiri Island.

Measuring straight [across the Nemuro Strait], the distance between Kunashiri  away from Shibetsu Town is 24 km. It is not known how the man actually crossed the strait.

The Embassy of the Russian Federation to Japan has released a comment on social media saying that “the man is Russian and his name is Nokarde, according to Japanese immigration authorities.”

According to the Russian Consulate General in Sapporo, the consulate general requested the immigration authorities to allow its representatives to visit the man, but the visit has not been permitted because “the man himself has refused the visit.”

The Sapporo Regional Immigration Services Bureau is expected to continue to ascertain the facts of the situation by questioning the man himself and, based on that information, decide whether to allow him entry into Japan by “temporary asylum” or to repatriate him to Russia.