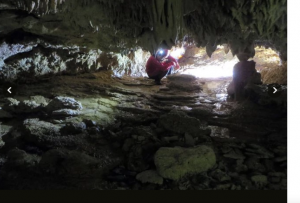 A layer of rock, resembling “beach rock,” covers the floor in the Nagashima Limestone Cave in Nago, Okinawa Prefecture, on Oct. 27, 2018. No similar structure has been documented inside a cave elsewhere in the world. (Takao Nogami) 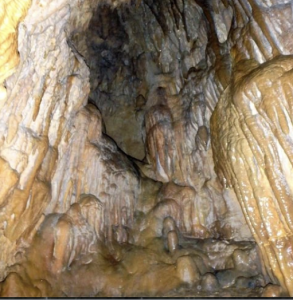 Diverse speleothems, including stalactites, draperies and columns, are seen in the inner part of the north cave of the Nagashima Limestone Cave system in Nago, Okinawa Prefecture, on Oct. 27, 2018. (Provided by Kensaku Urata)

NAGO, Okinawa Prefecture–A treasure trove of rare limestone structures has been found in a small cave system on Nagashima, an islet off the Henoko district of this southern city, a group of researchers said.

The scientists on the team found speleothems–geological structures formed by the deposition of minerals in a cave–of 14 types, including those of a rare sort that had not been previously reported and those that were formed through the actions of microorganisms.

The team was led by Kensaku Urata, a research fellow of karst landform with Kyushu University, who previously served as president of the Speleological Society of Japan.

Urata said the cave system, despite its modest size, is extremely precious, as it retains the vestiges of its birth process, from the time it was formed hundreds of thousands of years ago, and its growth process that continues to this day.

Nagashima rises from the sea in a coral reef area some 800 meters off Henoko point, where controversial landfill work is under way to build a relocation site for a U.S. military base.

Urata said he is concerned that the work to build the military base relocation site in Henoko could alter the environment on and around Nagashima.

“The interior of the cave system contains no vestiges of human-made impact,” Urata said. “But it could be affected, for example, by landfill soil from the base construction work in the future.”

Nagashima is about 400 meters long, up to about 100 meters wide and has a peak elevation of 13.5 meters.

Urata and his coworkers studied the cave system, formed on the southwestern side of the island, in 2018 through arrangements made by the Nature Conservation Society of Japan.

The survey showed the cave system has a total length of 30 meters or so and comprises an entrance part, an east cave and a north cave, the latter being subdivided into a main part and an inner part.

The structures, which the scientists named “cemented gravel towers,” are up to about 70 centimeters tall and measure up to about 20 cm across.

The presence of the towers had been previously known. They were believed to be stalagmites, which are formed when drops of water containing lime fall from the ceiling and splash and spread on the floor, where the lime content is left to deposit.

The latest study showed, however, that they are products with no parallel in the world, and they were formed when groundwater containing lime fell on sediments of branching coral and pumice, where the lime deposited, cementing those materials along the way.

Products resembling a structure called “beach rock,” whose formation scientists have traditionally attributed to a rise in water temperatures under solar radiation on low-latitude beaches, were also found on the floor of the main part of the north cave.

No previous report is available on the presence of beach rock inside a cave beyond the reach of sunlight, which calls into question previous arguments on how beach rock is formed.

In addition, speleothems of an entire variety of other types were found in the cave system, including soda straws, stalactites, stalagmites, columns, flowstone, rimstone, draperies, coralloids, helictites and cave balls. Some of these were formed by dripping water, whereas others were created by running water.

Also discovered, for the first time in Japan, were “photokarst” landform features, or speleothems that bend as they grow under the activity of photosynthesizing microorganisms, such as cyanobacteria.

Those photokarst features–more specifically, photorimstone, photostalactites and photostalagmites–are thought to have developed after an opening was formed on the coastal side of the cave system, which allowed sunlight to enter.

All these findings suggest the Nagashima Limestone Cave system developed under the action of ocean waves and organisms, including bacteria, into a “little jewel box,” in Urata’s words, of a broad diversity of speleothems, the researchers said.

Corrosion tubes and half-tubes, or conduits of fresh water that were likely created when the cave system was born, were also found in its innermost part.

It appears likely that a limestone zone, far larger in size than the landmass of the island, previously existed in the background, and the cave system was formed when river water flowed into the zone from the outside and entered an underground stream in limestone.

The scientists on the team conjectured there used to be a lost limestone plateau, or a hypothetical “Henoko karst tableland,” on and around Nagashima. They also inferred a vast karst area, of which the zone is only a part, may have existed over a broad area along the Pacific coast in the central part of Okinawa’s main island.

The researchers are stressing the importance of preserving the cave as is and the need for conducting a larger-scale survey of it.

The research results were published on Aug. 2, in Japanese, in the electronic edition of the Okinawa Journal of Geographical Studies.

Kishida’s reversion speech reassures Okinawans that they are fellow countrymen