OSAKA — Japan’s Daikin has kicked off an air conditioning “subscription” service in Africa that let’s users turn on the AC — only on days they need it — through a smartphone app.

With no need to purchase the machine itself, users pay an initial installation fee of around $77 and roughly $1.40 for a day’s use of the cool air. The first African country to receive this new service is Tanzania.

It marks a business model shift for Daikin, which had until now focused primarily on manufacturing and selling the devices. It also marks a push into digital services, an area the Japanese giant sees necessary as it prepares for the entry of Tesla.

“We wanted to try a new operational model,” said Taro Mitani, Daikin’s head of collaboration with startups. While Africa’s demand for air conditioners only accounts for 3% of the world, with only 1% of households equipped with AC units, Daikin sees tremendous growth potential.

The plan is to install 50,000 devices as a first step, in the likes of beauty parlors and restaurants. China’s Midea Group and South Korea’s LG Electronics are front-runners in the African market. But while they offer devices at affordable prices, maintenance services are not prevalent on the continent.

Daikin has found that around seven in 10 AC units in Africa were broken and abandoned. The subscription model — under which Daikin continues to own the devices — will offer a better alternative, the Japanese company believes.

Daikin has teamed up with Tokyo-based startup Wassha for fee collection. Wassha rents out LED lanterns to people in off-grid East African communities and already has established a digital payment system there.

The Africa project was born out of a discussion between Daikin Chairman Noriyuki Inoue and Wassha CEO Satoshi Akita.

After listening to Akita’s endeavors in Africa, Inoue felt that Daikin should not stick to only manufacturing and sales. “We must continuously break away from past success experiences,” he told staff. 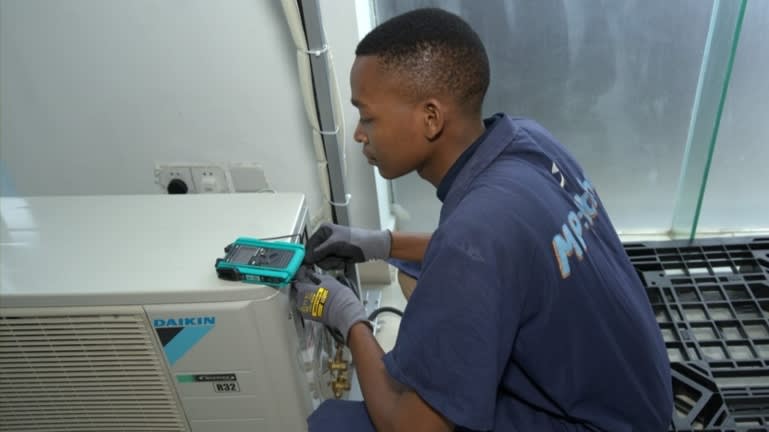 A technician checks a Daikin air conditioner in Tanzania. Seven in ten AC units were broken and abandoned in Africa, according to Daikin’s research. (Photo courtesy of Daikin)

One reason for Inoue’s sense of urgency is the presence of disrupters on the horizon. Elon Musk, the Tesla founder with ventures ranging from space travel to tunnel construction, has now set home air conditioning in his sights.

“That’s a pet project that I’d love to get going on,” Musk told investors last September, saying that work on it could start in 2021.

Tesla is said to be exploring synergies between its many businesses, that would combine air conditioning with electric vehicles, storage batteries and solar panels. Such offerings would be services that existing players like Daikin do not have and could alter the industry landscape.

Daikin President Masanori Togawa said, “The key difference between winners and losers will be over who can transform their business with digital technology.”