Despite the recent evacuations conducted by the U.S. and other nations, another a few hundred thousand Afghans who cooperated with the Americans reported still remain in the country, according to some estimates. These people could be subject to retribution from the Taliban, despite the assurance of asylum from Afghanistan’s new rulers.

“My family members are in danger, being searched for by the Taliban,” an Afghan acquaintance told this reporter this week.

The American exit is also a setback for allies such as Japan, which spent a decade supporting the U.S. military through refueling and devoted around $7 billion for Afghanistan reconstruction.

Yet the U.S. withdrawal from Afghanistan was no surprise. The path was set by President Barack Obama. His successor, President Donald Trump, negotiated the conditions of the drawdown with the Taliban. President Joe Biden has only implemented the withdrawal, albeit in a chaotic manner. 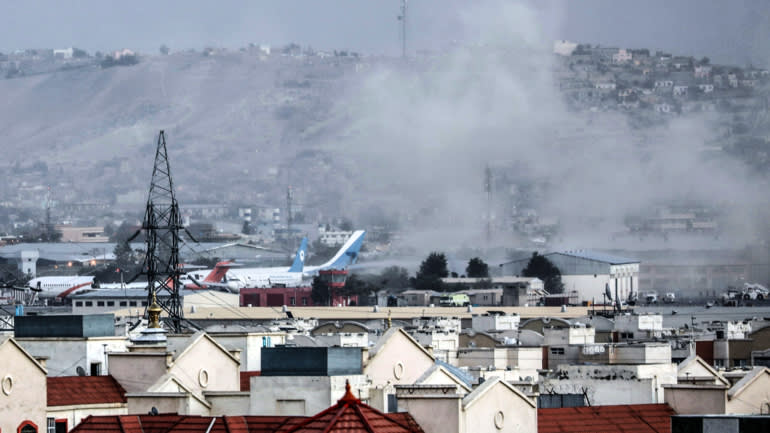 In the waning days of a massive airlift that has drawn thousands of people seeking to flee the Taliban, smoke rises from a deadly explosion outside the airport in Kabul, Afghanistan.   © AP

What do the recent developments mean with respect to international politics?

First, it is clear that the era of the U.S. acting as the world’s policeman is truly over.

Obama declared back in 2013 that the country should not continue to take on such a role.

“Terrible things happen across the globe, and it is beyond our means to right every wrong,” he said in a speech on Syria.

The Afghan withdrawal shows this reality to the world. Washington is expected to become more cautious in its overseas interventions as it weighs national interests each step of the way.

Looking back in history, the U.S. actually spent only a brief period as the world’s policeman, perhaps from the end of the Cold War in 1989 to the Iraq War that began in 2003.

From the late 1940s to 1989, the world was divided into two blocs, and the area in which the U.S. exercised such “policing” was limited to the Western side.

U.S. leadership strengthens after the collapse of the Soviet Union. When Saddam Hussein’s Iraq invaded Kuwait in 1990, Washington led a multinational force based on a United Nations resolution to kick the dictator’s troops out.

But by the time the U.S. went to war with Iraq again in 2003, the American engine was losing steam. Skeptical about Washington’s claim of Iraqi weapons of mass destruction, allies like France and Germany opposing the war. WMDs were never discovered, and American credibility was dented. 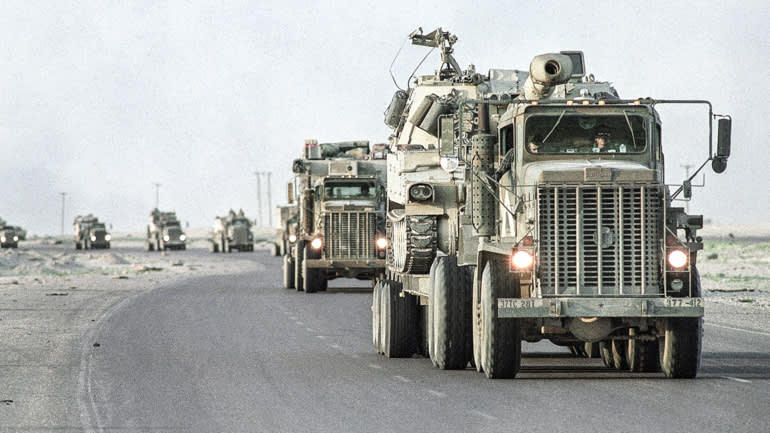 The military balance in Asia is tilting in favor of China, and Washington is no longer capable of being the world’s sole policeman.

The U.S. withdrawal from Afghanistan carries two meanings for the Indo-Pacific: One is a welcome development, while the other is a cold reality.

The positive aspect is that Washington will focus its military and diplomacy on the region, bolstering efforts to counter China.

According to an analysis by Brown University, the U.S. has spent more than $2.3 trillion and lost over 2,000 military personnel in Afghanistan. Continued warfare in the country would extract a heavy financial toll and sap American leadership of political capital.

When asked about the U.S. exit from Afghanistan, some officials and experts in Japan and Southeast Asia welcomed the move, which they think will let Washington focus more on its China strategy.

“At the moment, European countries are very angry about the way the Biden administration carried out the withdrawal,” said Michael Clarke, former director-general of the Royal United Services Institute in London. “But, if I was in Asia, I would think this will be beneficial to Asian security in the longer term, even though U.S. credibility does take a short-term hit. Because this decision gives the U.S. the space to concentrate more on Indo- Pacific issues.”

“One more year, or five more years, of U.S. military presence would not have made a difference if the Afghan military cannot or will not hold its own country,” Biden emphasized in a statement on Aug. 14, a warning to any American partners that fails to pull their own weight.

The remark coming from Biden, who has championed U.S. alliances, instead of Trump drives home the message that much harder. Regardless of who sits in the White House, the U.S. is unlikely to tolerate allies and partners that simply piggyback on American military might.

Japan, South Korea and Australia hold far more strategic importance for Washington than does Afghanistan. But it would be a mistake for these countries to assume the U.S. always will come to their rescue, even when they make insufficient effort to defend themselves.

Japan devotes roughly 1% of its gross domestic product to defense, falling short of the world’s top 100 spenders as a share of GDP. In contrast, South Korea spends 2.7% of GDP while Australia allocates 2.1%.

“Generally resisting Washington’s urgings to increase its military spending and participation, Japan’s defense budget has remained near its long-standing 1% level,” Elbridge Colby, a former U.S. deputy assistant secretary of defense for strategy and force development, wrote in Nikkei Asia in June. “Many Japanese likely hope that the U.S. will shoulder most of the burden of addressing the worsening military balance in Asia. But this will not work. The United States already spends more than 3% of GDP on defense.”

As the U.S. will no longer act as the world’s sole policeman, major countries will need to work together, sharing the responsibility. That is the message the U.S. exit from Afghanistan has sent to allies.