One of the guest rooms of the U.S. Ambassador’s residence has been named the “Inouye Room” in honor of the late Democratic Senator Daniel Inouye, the first Japanese-American to be elected to Congress, and his late wife. First Lady Jill Biden attended the dedication ceremony held in July 2021. Dr. Biden commended the Inouyes for their contribution to the Japan-U.S. relationship. 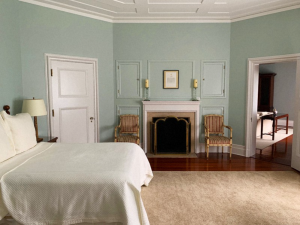 According to the U.S. Embassy in Japan, Dr. Biden was in Japan to attend the Opening Ceremony of the Tokyo Olympics. In the July 24 dedication ceremony, Dr. Biden lauded the Inouyes for their “outstanding contribution to the U.S. and Japan.” The garden of the Ambassador’s residence has a water fountain that former Ambassador John Roos dedicated to Senator Inouye in 2013.

Senator Inouye, who died at the age of 88, was a second-generation Japanese American. Senator Inouye enlisted in a Japanese-American regiment in World War II and lost his right arm in a battle on the European front. Senator Inouye served in the Senate for about 50 years and strove to promote friendly relations between Japan and the U.S.

Irene Hirano, Senator Inouye’s wife, was a third-generation Japanese American. She was the first director of the Japanese American National Museum and died at the age of 71. Hirano was a central figure in the “TOMODACHI Initiative,” a reconstruction program in response to the Great East Japan Earthquake. (Kyodo)