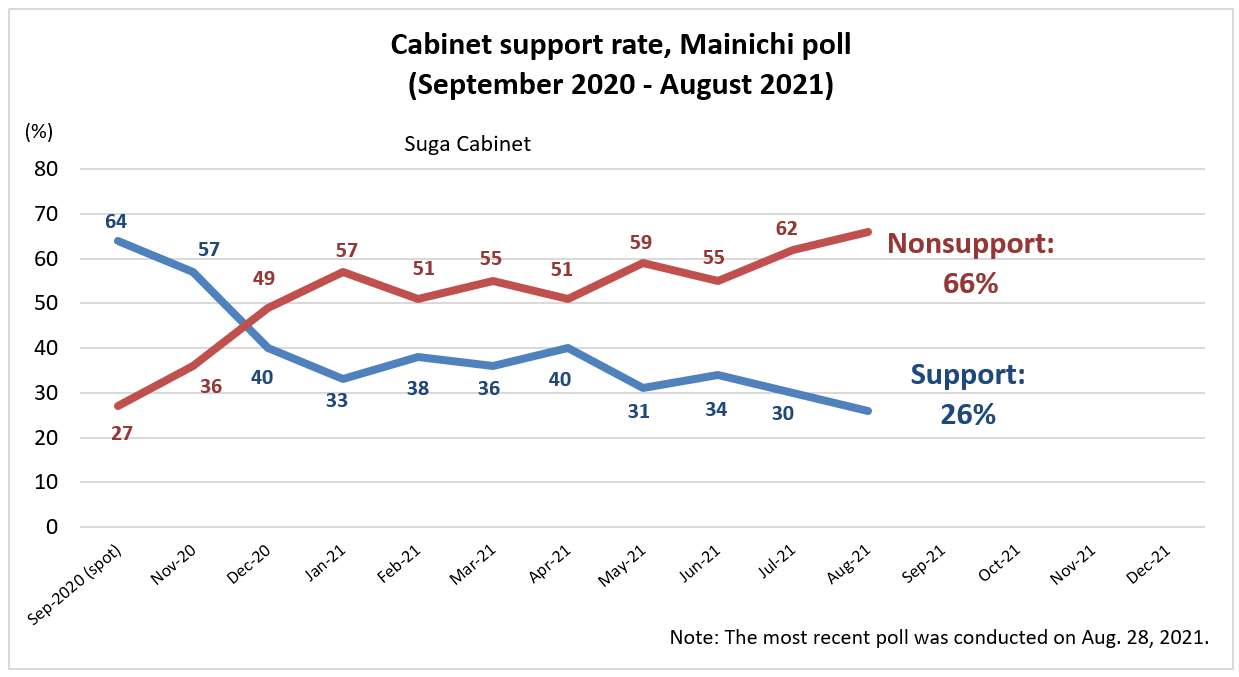 TOKYO — The approval ratings of Japanese Prime Minister Yoshihide Suga’s Cabinet fell to a new low of 26% in a nationwide opinion poll on Aug. 28, shedding 4 percentage points on the previous poll in July and marking the first time the support ratings have dipped below the 30% mark since the administration’s launch in September 2020.

The poll, conducted jointly by the Mainichi Shimbun and the Social Survey Research Center, also saw the disapproval ratings for the Suga Cabinet reach a record-high at 66%, up 4 points from the previous poll held on July 17.

The current Cabinet’s 26% support rate has tied that for Suga’s predecessor Prime Minister Shinzo Abe’s second administration in a July 2017 poll, the latter’s lowest, though the survey methods differ between the two questionnaires.

Of the respondents to the latest poll, 14% said they appreciate the Suga Cabinet’s coronavirus countermeasures, down 5 points from the July survey and well below the 70% who said they don’t. The latter group increased from 63% in the last poll. Some 16% of respondents said they were not sure, down from 18% in the July survey.

When asked if they are worried about Japan’s medical system collapsing, 70% of respondents said they are, well over the 15% who said they aren’t. As the number of COVID-19 patients is spiking due to the surge in infections, there has been a spate of cases where patients unable to be immediately hospitalized die while recuperating at home, raising fears among many people in Japan. Behind the sagging Cabinet approval ratings apparently lie frustrations among the public over the government’s coronavirus response, as well as a lack of improvement in alleviating strains on the medical system.

Among the pollees, 26% supported the ruling Liberal Democratic Party, down 2 points from the July poll, while 10% backed the largest opposition Constitutional Democratic Party of Japan, the same as in the last survey. The support rate for the conservative opposition Japan Innovation Party (Nippon Ishin) stood at 8% (6% in the July poll), followed by the Japanese Communist Party at 5% (7%), the LDP’s junior coalition partner Komeito at 3% (4%), Reiwa Shinsengumi at 2% (1%) and the Democratic Party for the People at 1% (1%). Approximately 42% of respondents said they had no party affiliation, up 3 points from the July poll.

Respondents answered questions sent either through short message services on mobile phones or automated voice messages on landlines. Valid responses were received from 774 people via mobile phones and 335 from landlines.