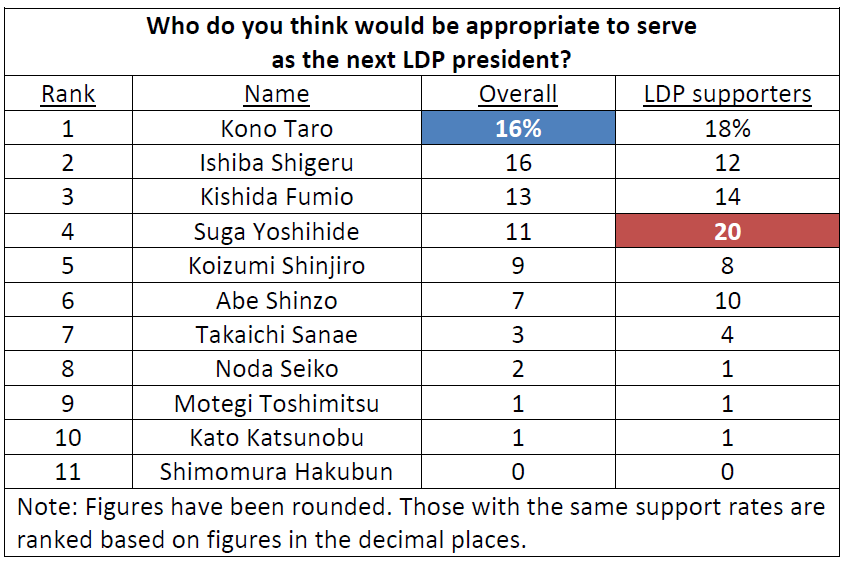 TOKYO — Taro Kono, Japan’s regulatory reform minister and also minister in charge of vaccinations, ranked first in a Nikkei poll as “a person suited to be the next president of the Liberal Democratic Party.” The answer was chosen by about 16% of respondents in an opinion poll conducted from Aug. 27 to 29 by Nikkei.

Shigeru Ishiba, former secretary-general of the ruling party, almost tied for first place, with just a fraction of a percentage point below Kono. Fumio Kishida, the former chairman of the LDP’s Policy Research Council, who has announced his candidacy, placed third at 13%, while Prime Minister Yoshihide Suga came in fourth at 11%.

The LDP presidential election will take place as Suga’s tenure as president ends. Campaigning for the election will officially begin on Sept. 17, and balloting and vote counting will be conducted on Sept. 29. Under Japan’s parliamentary cabinet system, if the president of the LDP, the largest party in the Diet, is replaced, the prime minister will also be replaced.

Suga’s approval rating remains low mainly because of his handling of the coronavirus pandemic, but the prime minister has expressed his intention to seek re-election as president. Kono and Ishiba have not made it clear whether they will run in the election. Ishiba ran in last year’s presidential election to succeed then Prime Minister Shinzo Abe, and lost to Suga by a large margin, along with Kishida. Ishiba, who served as defense minister and LDP secretary-general, has been regarded as a promising candidate for prime minister, but has remained away from the center stage of politics as he has not been on good terms with Abe.

Sanae Takaichi, former minister of internal affairs and telecommunications, who has shown a willingness to run, was supported by 3% of respondents in the poll.

The result is considered to be influenced by party members’ votes that better reflect  public opinion. Since the term of Diet lower house members ends on Oct. 21, a growing number of party members may say that a person who can be the “face of the (lower house) election” should be elected president.

Of respondents who support the LDP, the prime minister was supported by 20%, the largest number, followed by Kono at 18%, Kishida at 14% and Ishiba at 12%.

Asked about policies expected of the next LDP president, with multiple answers permitted, 53% of respondents, the greatest number, selected measures to fight the coronavirus. Economic recovery came in second at 37%, and pension, medical care and nursing care took third at 33%. Among respondents who selected coronavirus measures, the largest number supported Ishiba as the next president.

To the question of how long Suga should continue as prime minister, 16% of respondents said they “want him to be replaced quickly” and 52% said they wanted him to continue “until the end of the president’s term in September,” with the replies totaling nearly 70%. The answer “until next summer’s upper house election” accounted for 13% of total, “about two to three years” made up 6%, and “as long as possible” only 6%.

The poll was conducted from Aug. 27 to 29 on people aged 18 and older across the country, selected by the random digit dialing method, using telephone, including mobile phones, and obtained 1,025 valid replies, or 46.6% of people polled.