Opinion: The ground under Japan’s ruling coalition is starting to shift

Tobias Harris is a senior fellow at the Center for American Progress, an independent nonpartisan policy institute. He is the author of “The Iconoclast: Shinzo Abe and the New Japan.”

National politics rarely turn on a local government election in a single metropolis — but the defeat of a ruling Liberal Democratic Party candidate in the Yokohama mayoral race on Aug. 22 may prove to be the rare exception.

The most immediate issue is how the loss by Hachiro Okonogi will affect Prime Minister Yoshihide Suga’s chances in next month’s Liberal Democratic Party leadership election. Coming after a string of disappointing losses for LDP candidates under Suga’s leadership, the rout in Yokohama is particularly alarming given that it is Suga’s adopted hometown and electoral constituency. Ruling coalition candidates are increasingly apprehensive about contesting this autumn’s general election with Suga as the face of the government.

Despite the dangers of extrapolating from a single local election, three factors that contributed to the victory by opposition-backed Takeharu Yamanaka suggest that not only is Suga’s position tenuous, but that the LDP could be facing an even more challenging election than previously anticipated.

First, voter turnout rose nearly 12 percentage points compared with four years ago. While local factors such as an unpopular plan to bid for one of Japan’s first integrated resort casinos certainly contributed to this bump, Suga’s personal involvement in the campaign may also have been a factor.

In former Prime Minister Shinzo Abe’s six national electoral victories, including general elections in 2012, 2014 and 2017, Abe and the LDP depended heavily on depressed voter turnout. Abe returned to power in 2012 after winning a general election in which turnout plunged to a postwar record low of 59.3% — and in which the LDP actually received fewer votes than in its landslide defeat in 2009.

When he renewed his majority in 2014, turnout plunged even further, to 52.6%, and only slightly improved in 2017 to 53.7%. While turnout in upper house elections did not approach the record low of 44.5% set in 1995, it was still consistently lower than during the previous decade.

These low-turnout contests meant that the relative weight of the “organized votes” of the LDP and coalition partner Komeito was greater, with the opposition lacking the organizational strength to turn out the unaffiliated voters it needs if it is ever to have a chance of winning.

As the now-defunct Democratic Party of Japan showed during its march to power in the 2000s, the opposition’s path to victory lies in lifting voter turnout. If the Yokohama election is a sign that independents are more willing to vote this year, the LDP will have a harder time defending its majority.

But in Yokohama, exit polls suggested that independent voters fueled Yamanaka’s surprisingly large victory, winning the support of roughly 40% of independents — a particularly impressive feat given the eight-candidate field and the quality of the candidates running. He also secured the bulk of Constitutional Democratic Party (CDP) supporters and its electoral partners, the Japanese Communist Party, and the Social Democratic Party, pointing to potentially more effective coordination among the opposition parties. 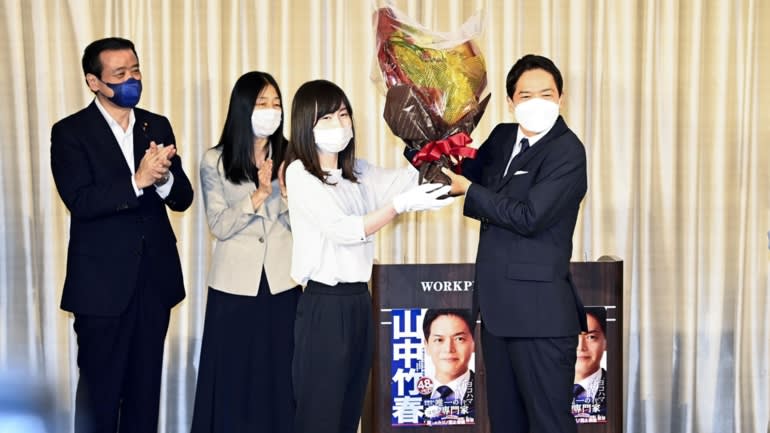 Finally, COVID-19 could scramble voting patterns. While the casino bid was undoubtedly a factor, exit polls suggested that COVID-19 may have played a role in both boosting turnout and pushing independents toward the opposition-backed candidate. For example, in NHK’s exit poll, when asked which issue they were most concerned about other than the casino bid, 37% cited COVID-19 countermeasures, significantly more than any other issue.

In the Asahi Shimbun newspaper’s exit poll, more than 30% said that they wanted the new mayor to prioritize fighting the pandemic — and half of the voters who cited the pandemic backed Yamanaka. Suga himself, reflecting on the outcome, suggested that it was at least as much a referendum on his and the municipal government’s handling of the pandemic as on the casino bid.

To be sure, the Yokohama election was quirky. After all, the two LDP-affiliated candidates, Okonogi and outgoing Mayor Fumiko Hayashi, together received slightly more votes than Yamanaka. Meanwhile, there are signs that the CDP and its partners may not be able to cooperate as effectively in other constituencies or nationwide as they did in Yokohama.

Nevertheless, after losing parliamentary by-elections in April and failing to win a majority in Tokyo’s metropolitan assembly election in July, it is not unreasonable that the LDP appears to be growing increasingly alarmed by the prospect that the general election could become a referendum on Suga’s handling of COVID-19 — and that it cannot assume that independent voters will be as inclined to stay home as they were over the past decade.

While the CDP is still a long shot to win power in a general election, if the patterns that fueled Yamanaka’s victory were to recur in the general election, the opposition would significantly reduce the government’s majority and inaugurate a new period of political competition.