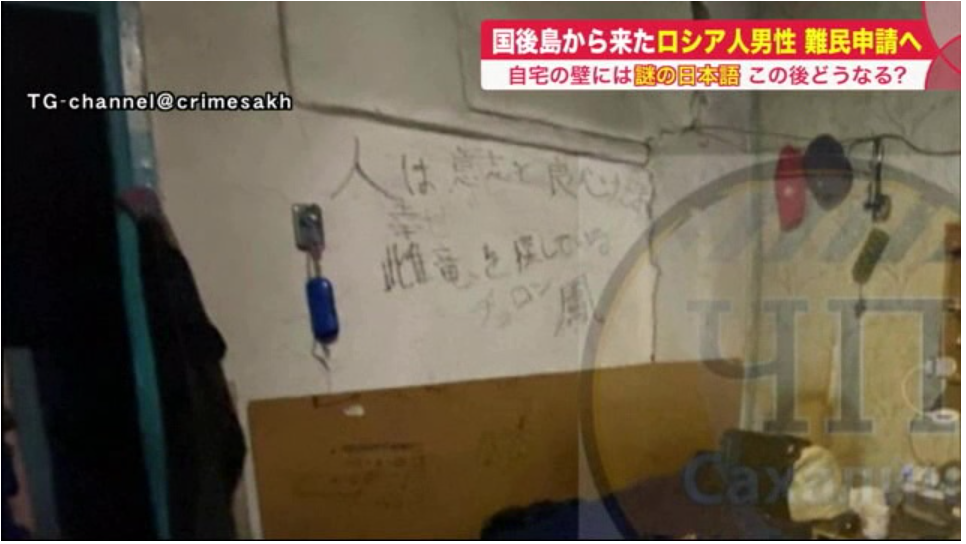 Words that appear to be Japanese were found on the wall of the home of the man who “swam over from Kunashiri Island.” The characters mean “people have intentions and a conscience” and “seeking a female dragon.”

According to Sekine Hiroki, a reporter at the Moscow Bureau [of Hokkaido Cultural Broadcasting], some Russian media outlets have reported that [V. Nokarde, the Russian man who was taken into police custody in Hokkaido on Aug. 19 and says he “swam over from Kunashiri Island seeking asylum”] is expected to be refused asylum to Japan and to be handed over to the Russian side in early September, but there has been a new development.

According to Japanese immigration authorities, the man applied for “landing permission for temporary refuge,” which would allow him to enter Japan on an exceptional basis, but later  cancelled that application and now hopes to apply for refugee status.

Reportedly, he will enter the screening process [for the application for refugee status] in coming days, but it is hard to know at this point how his custody will be handled.

Complicating the case is the fact that the man came to Shibetsu Town, Hokkaido, from Kunashiri Island in the Northern Territories.

Japan’s position is that the Northern Territories are an “inherent part of Japan,” so this means that the man has only relocated within the nation.

How would Japan handle the case if it were to decide to reject his application for refugee status and to repatriate him to Russia?

Hokkaido University Professor Iwashita Akihiro, an expert on Japan-Russia relations, speculates, “If Japan were to repatriate the man to Kunashiri Island, it would mean recognizing that island as Russian territory, so I think Japan will handle the case by separating it from the territorial dispute, saying it is unclear where the man came from.” (Abridged)