The nationwide public opinion poll conducted by the Nikkei on Aug. 27–29 probed views on who would be appropriate to serve as the next president of the Liberal Democratic Party (LDP). The top four were Minister in charge of Administrative Reform Kono Taro (16%), former LDP Secretary-General Ishiba Shigeru (16%), former LDP Policy Research Council Chairman Kishida Fumio (13%), and Prime Minister Suga Yoshihide (11%). Analyzing each candidate’s backers reveals differences in their support base.

The LDP presidential election is scheduled for Sept. 29, with campaigning to start on Sept. 17. Prime Minister Suga has indicated his intention to run, as has Kishida. Former Minister of Internal Affairs and Communications Takaichi Sanae has also expressed interest. At the time that the opinion polls were conducted, Ishiba and Kono had not indicated whether they would run.

The percentage of respondents who picked Suga or Kishida increased at the end of August, although no general comparison can be made because the media outlets’ survey methods differ. The opinion polls taken in early to mid-August showed support for these two in the single digits. In the survey conducted by the Mainichi Shimbun on Aug. 28 and the one taken by the Nikkei on Aug. 27–29, however, backing for the two was in the 10% range.

The reason behind this rise seems to be the increase in media exposure with the press conference Kishida held on Aug. 26 to announce his candidacy. 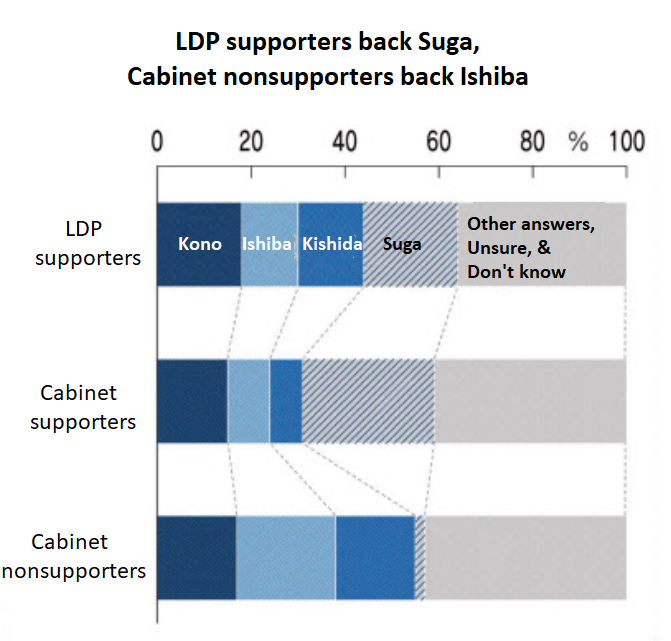 Kono is also popular among the younger generation. Some 22% of respondents ages 18–39 chose Kono. His backing was more than 10 percentage points higher than that of Suga, Ishiba, or Kishida. 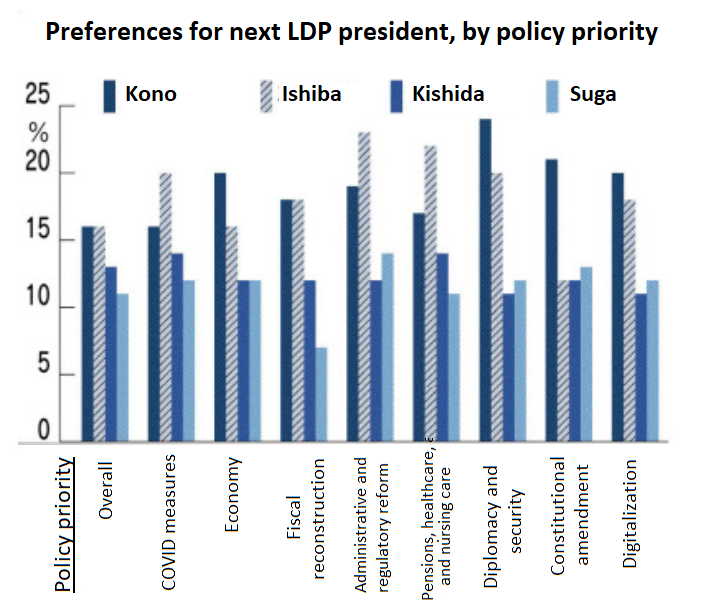 Ishiba, who was in second place by a fractional difference, and third-ranked Kishida will win the votes cast to object to the current administration [based on the results of the Nikkei poll]. Of Cabinet nonsupporters, 21% selected Ishiba, while 17% chose Kishida and another 17% backed Kono.

Ishiba received the highest backing from respondents who would like to see the next LDP president prioritize COVID countermeasures and disaster prevention. Dissatisfaction with the handling of COVID-19 is a factor driving the Suga Cabinet’s low approval rating. Kishida also received more support than Suga from respondents who want to see the next president combat COVID-19 and address fiscal reconstruction.

Ishiba and Kishida were backed by the elderly. Some 20% of respondents age 60 or over selected Ishiba and 17% backed Kishida, giving them the first and second rankings among this age group.

Among respondents living in 39 prefectures (i.e., excluding the Tokyo metropolitan area and the Kansai area), Kishida was the top pick, earning the backing of 15% of respondents, and Ishiba was second by a fractional difference. Meanwhile, 14% of this group supported Kono and 12% went for Suga.

Suga ranked highest among LDP supporters at 20%, followed by Kono (18%), Kishida (14%), and Ishiba (12%). The LDP presidential election is decided by the votes of LDP parliamentarians, rank-and-file party members, and fraternity members nationwide.

Some 32% of respondents said they support the LDP but not the Cabinet. If dissatisfaction over the COVID situation spreads further, it will affect the outcome of the presidential election.