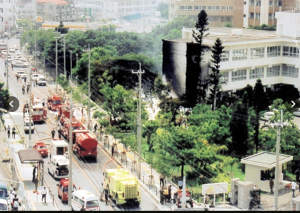 A photo provided to the Watashi no Mita Kabe project shows Okinawa International University and the surrounding area in Ginowan, Okinawa Prefecture, immediately after a U.S. military helicopter crashed on Aug. 13, 2004. (Provided by the project executive committee)

GINOWAN, Okinawa Prefecture–Michiyo Arakawa has visited Okinawa International University here on Aug. 13 almost every year to take photos in a surrounding residential area since a U.S. military helicopter crashed on the university 17 years ago.

When she finds changes in the townscape, such as new homes having been built, Arakawa is overwhelmed by the unchanging reality of this southernmost prefecture, which continues to be plagued by accidents caused by the U.S. military. 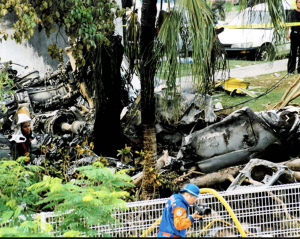 A photo provided to the Watashi no Mita Kabe project shows the wreckage of a U.S. military helicopter at Okinawa International University. (Provided by the project executive committee)

On Aug. 13, 2004, Arakawa rushed to the university, about a 15-minute drive from Urasoe, where she lived at the time, after seeing the breaking news about the accident on TV.

She saw the charred wall of a building on the campus, just south of U.S. Marine Corps Air Station Futenma, where the CH-53 heavy-lift transport helicopter was based.

Arakawa has since organized an annual exhibition of photos about the accident taken by students and residents to coincide with the anniversary as a leading member of the Watashi no Mita Kabe (The wall I saw) project.

On that day, Arakawa remembered how her father, who was born before World War II, used to tell her that U.S. military aircraft could fall from the sky at any moment.

In 1966, a relative of her father was killed when a U.S. military aircraft crashed into a car he was driving. He was 33 years old. Okinawa Prefecture was still under U.S. military occupation. 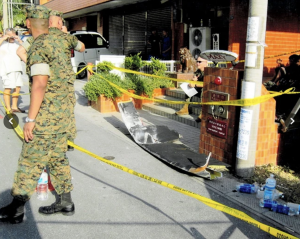 A photo provided to the Watashi no Mita Kabe project shows a damaged part of a crashed U.S. military helicopter near Okinawa International University on Aug. 13, 2004. (Provided by the project executive committee)

Arakawa feels uncomfortable seeing U.S. military aircraft flying over the accident site where there is not even a cenotaph every time she passes by the location after she became an adult.

No residents were injured when the CH-53 helicopter crashed on Okinawa International University, but the accident uncovered the realities of the lopsided Japan-U.S. relationship.

The U.S. military shut down the site for seven days based on the bilateral Status of Forces Agreement and other arrangements. Prefectural police were not allowed to carry out substantial investigations.

Broken pieces of the fuselage were scattered in a residential area around the university.

Arakawa, a “kirigami” paper-cutting artist, started collecting photos of the crash site taken by students and residents. She felt as if the photos were filled with their anger and frustration.

One shows the white wall of the university building with scorch marks, while a java cedar tree whose upper part was chopped off is seen in another.

The executive committee of the Watashi no Mita Kabe project collected about 1,000 photos in two years after the accident. The number has increased to about 1,500. 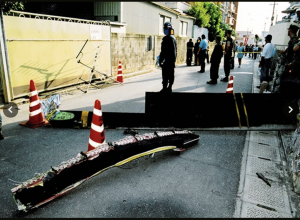 A photo provided to the Watashi no Mita Kabe project shows damaged parts of a crashed U.S. military helicopter near Okinawa International University on Aug. 13, 2004. (Provided by the project executive committee)

Arakawa was forced to cancel the exhibition for the first time last year due to the novel coronavirus pandemic. She intends to hold the event this year after things settle down.

In Okinawa Prefecture, there were eight U.S. military aircraft crashes and 394 crash landings between 2005 and 2020, according to figures compiled by the prefectural government.

In June, a U.S. military helicopter made an emergency landing on Tsukenjima island in Uruma in the prefecture.

The central government says Japan-U.S. guidelines on responses to U.S. military aircraft accidents have been improved.

But Arakawa is left unconvinced as she sees prefectural police officers checking out accident sites from outside the perimeter.

“I’m sure those who provided the photos are also angry,” she said. “We want to continue the exhibition until there are no more accidents.”

Okinawa International University has been hosting a rally every year since the accident, but it was canceled for the first time this year due to the pandemic. Instead, the university streamed online video messages by President Eiken Maetsu and students.

Maetsu pointed to three accidents caused by military aircraft based at the Futenma air base between June and July, possibly carcinogenic materials that leaked outside the base and late-night landings and takeoffs.

Maetsu urged Tokyo and Washington to immediately close and remove the base, located in a densely populated residential area of Ginowan. A contentious project to relocate the base to the Henoko district of Nago, also in Okinawa Prefecture, has been stalled over the years.

“The (initial) deadline to return the base to Japan has long passed, but things have gotten worse instead,” Maetsu said.