GUANGZHOU — The poaching of a former Toyota Motor ace engineer by a government-owned Chinese automaker took many in the industry by surprise.

Masato Katsumata had spent more than 30 years at Toyota, mainly in the engineering division. He oversaw a full revamp of the Camry sedan as its chief engineer and was involved in numerous overseas projects.

But at a Guangzhou Automobile Group (GAC) investor event here in July, Katsumata was the newly minted chief technical management engineer at the automaker’s R&D center. He spoke in Chinese about himself and his ambitions at his new company.

“At GAC, I want to make cars that will amaze the world,” Katsumata said.

He is one of a number of Japanese engineers — mainly seasoned veterans but increasingly younger workers as well — seeking greener pastures in the world’s largest auto market, particularly as Japanese automakers shed jobs. 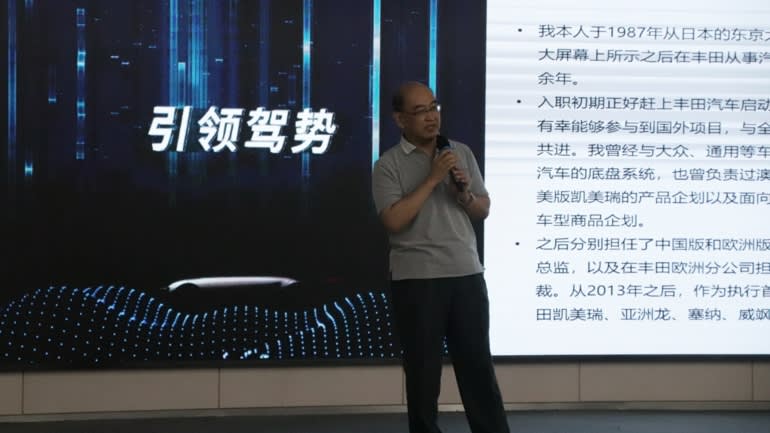 Electric-vehicle makers in particular have set their sights on Japanese talent.

Engineers who make the jump are drawn by higher compensation as well as the degree of discretion available to them in China.

It is not unusual for Chinese companies to offer six-figure salaries, rising to around $300,000 for managers in some cases. Some are assigned their own interpreters or drivers after joining, leaving few doors closed to them inside or outside work even if they cannot speak the language.

Engineers who managed only a handful of subordinates in Japan may be given the reins of a team of dozens in China. The chance to work with the “young, fast-moving and energetic” staff at GAC was the “deciding factor” in Katsumata’s decision to join, he said.

The government has positioned electric vehicles as a core industry, providing massive sales subsidies to encourage manufacturers to grow. Many up-and-coming players have been pushed into rapid expansion but lack necessary production know-how and look to add to their engineering ranks to meet the needs of a market expected to grow.

While the Japanese engineers who move to China have tended to be veterans on the brink of retirement with decades of experience, companies may pursue younger targets as well. GAC Chairman Zeng Qinghong has said the automaker will “continue actively hiring foreign talent who excel in their current roles.”

Restructuring at Japanese automakers being pushed to make the pivot to electrics is working to the advantage of Chinese peers.

A representative of a major Japanese human resources company working in China recently received a request from a Chinese automaker looking to hire a Honda engineer. More than 2,000 employees of the Japanese company have applied for early retirement packages since Honda opened up the program in April. Nissan has cut more than 10,000 jobs worldwide since 2019.

The situation bears some resemblance to a shift in the semiconductor industry three decades ago. Japanese chipmakers flourished in the 1980s — but from the late 1990s on, the semiconductor divisions of many electronics companies were deep in the red. Engineers left in droves, and Samsung Electronics snapped them up, using the talent to help establish the South Korean company’s current dominance.