Water released by U.S. military “cannot be said to be safe” 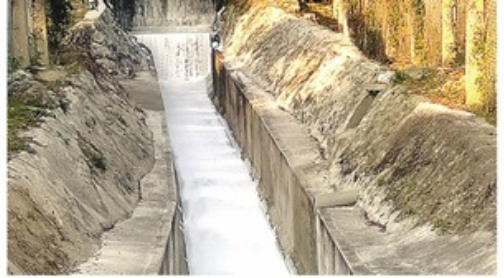 Foam extinguishing agent containing PFOS flows from the Futenma Air Station down a gutter outside the base (Ginowan City, Okinawa Prefecture, April 2020; photo courtesy of a local resident)

By Kuniyoshi Mika and Fukui Maho

On Sept. 2, officials from the Ministry of Defense and the Ministry of the Environment met with Ginowan Mayor Matsugawa Masanori at city hall and apologized for causing anxiety among local citizens over the U.S. Marines Corps’ recent release of water containing perfluorooctanesulfonic acid (PFOS) from Futenma Air Station (Ginowan City) into the local sewage system. There are no regulations on the release of such water [into the sewage system]. The U.S. military says it was safe, but the Japanese government said that the recent release of PFOS-containing water cannot be said to be safe.

PFOS is suspected to be carcinogenic.

According to Ginowan City, it was unable to obtain the details of the U.S. military’s recent release of water from its inquiries with the regional bureaus of the Ministry of Defense and the Ministry of Foreign Affairs in Okinawa and so asked Tokyo to explain the matter. It is unusual for officials based at headquarters to visit Okinawa to explain damage caused by a U.S. base.

Only the beginning of the meeting was open to the public. Ikeda Makoto, who heads the environmental policy section at the Ministry of Defense, said “I offer my deepest apologies. We also find the unannounced discharge [of PFOS-containing water] most regrettable.” Going forward, “we will call on the U.S. side not to release [such water] again, and we will have thorough bilateral discussions so that such water is properly treated,” he explained. After the meeting, Mayor Matsugawa said to reporters: “I was able to confirm that the central government (like us) had no information (about the discharge of water) and that the central government cannot say that the water was safe.”

The manufacture, etc. of PFOS was banned in principle in Japan in 2010. A guideline was established in 2020 restricting PFOS content to 50 nanograms or less per liter (provisional target figure) for water quality management of tap water and rivers only.

The U.S. side sounded out the Japanese side about its plan to release PFOS stored on the base. The U.S. side, in the words of Defense Minister Kishi Nobuo, “unilaterally” released the water even though the Japanese and U.S. governments were in the middle of discussions about how to handle water. Later, Kishi explained that “the storage tank was gradually reaching capacity and could overflow if there were heavy rains.”

Regarding the approximately 64,000 liters released this time, the U.S. military emphasizes that the PFOS content was 2.7 nanograms per liter or less after treatment using its own treatment system. There are no regulations governing the discharge of such water into the local sewage system, however, so the central and city governments both find themselves in a situation of being unable to assess the U.S. military’s figure.

When PFOS is disposed of in Japan, it is usually done by incineration by a specialized operator. According to the Ministry of the Environment, the decomposition rate can reach 99.999%, if the PFOS is heated at temperatures of about 850 degrees or more. According to Ginowan City, the U.S. forces in Okinawa have to date outsourced the incineration-based disposal to operators in Japan. This time, however, the U.S. side told the Japanese side that “incineration would pose a great financial burden.”

The discharged water flows into the sea after passing through a sewage treatment plant, but the plant is not equipped to remove PFOS. Okinawa Prefecture and Ginowan City are concerned that the PFOS could accumulate in fish because one characteristic of PFOS is that it does not decompose in nature virtually at all.