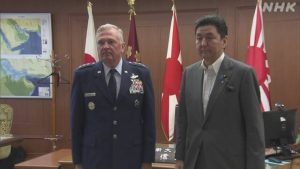 NHK reported online that Defense Minister Kishi met with the new USFJ Commander, Lt. Gen. Rupp, at the Ministry of Defense this morning. At the beginning of the meeting, Kishi reportedly expressed his condolences to the families of the U.S. service members who were killed in the terrorist attack near the Kabul airport. “I hope to swiftly build a relationship of trust with the commander in order to work together to further strengthen the U.S.-Japan alliance,” he added. Lt. Gen. Rupp reportedly responded by expressing his wish to build upon the trust relationship forged by his predecessors. According to the network, the two officials also exchanged views on how to respond to China’s maritime advancement and agreed to promote cooperation between the SDF and the U.S. military and further strengthen the alliance.