TOKYO — Two leading candidates in the Liberal Democratic Party presidential race have joined the call to increase Japan’s defense spending, setting the stage for a heated debate on how to address the growing threats from China and North Korea.

Vaccine czar Taro Kono, who is considered the front-runner, said Monday that an increase in defense spending would be inevitable.

“We need to first identify game-changing [defense] technologies,” Kono told reporters, adding that “the total figure will have to be raised.”

“It shouldn’t be all about scale,” he said. “The debate should be on strategy.”

Kono was responding to a call by rival Sanae Takaichi on Friday to raise the defense budget beyond Japan’s long-standing cap of 1% of gross domestic product.

“If we were to bring [the share of defense spending] in line with the West, it would be 2% of GDP, or around 10 trillion yen,” she said.

Fumio Kishida, the former LDP policy chief, also backed an increase in a video streamed Sunday on YouTube. “We shouldn’t be tied to 1% or any other figure,” Kishida said.

He followed up on the video appearance with a news conference Monday by promising to review Japan’s defense guidelines ahead of schedule.

The party will on Sept. 29 elect its next president to succeed outgoing leader Yoshihide Suga. Because the LDP holds a majority in the lower house, the party’s next leader will replace Suga as prime minister. 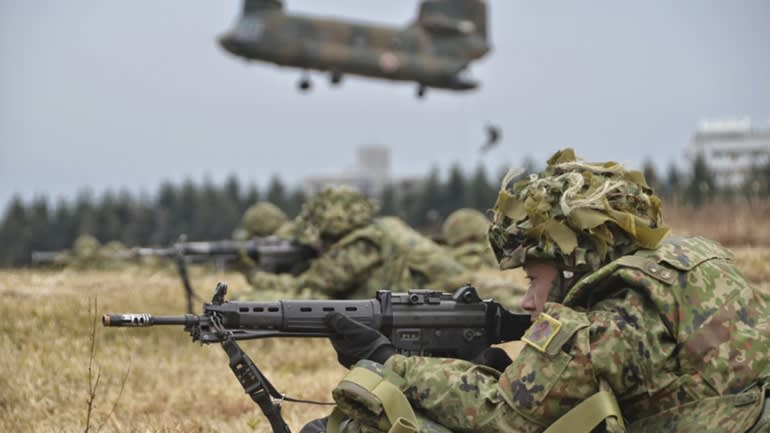 Japan’s defense spending will figure prominently in the policy debate leading up to the Liberal Democratic Party presidential race. (Photo courtesy of the Ministry of Defense)

That percentage would essentially match the 2.02% of France, and surpass the 1.89% of the U.K., in statistics from the Japanese Ministry of Defense. Germany’s 1.35% is the lowest percentage among major European nations but still higher than Japan’s.

Japanese Defense Minister Nobuo Kishi has also said he would not be bound by the 1% cap when requesting spending for next fiscal year.

Kishida and Kono each served as foreign minister under Prime Minister Shinzo Abe, who stepped down last year for health reasons. Takaichi has received Abe’s endorsement in the LDP race.

The three rivals all pledge to maintain the foreign and security policy pursued by Abe, centering on the strengthening of the security alliance with the U.S. But they differ on where the increased spending should go. With the security environment increasingly volatile, how much to elevate the Self-Defense Forces’ capability will be one focal point.

For Japan to defend areas surrounding the Senkaku Islands in the East China Sea, the SDF will need capabilities to fend off island-landing attempts, as well as to defend against incoming missiles and warplanes.

Along with strengthened defenses against missile attacks, Japan would need to develop and deploy long-range cruise missiles that can take out targets from positions outside the enemy’s attack range.

Although interceptor missiles cost tens of millions of dollars apiece, there is no guarantee that they will successfully shoot down targets. The U.S. may request Japan’s cooperation in deploying midrange missiles that would put China in range.

The LDP faction headed by Kishida is seen as cautious on expanding defense spending or pursuing policy that could provoke China. The list of policy plans unveiled by Kishida appears aimed at broadening support among conservatives.

Takaichi has expounded on the need to develop capabilities to launch cyberattacks to neutralize targets. Kono, on the other hand, has stopped short of endorsing such capabilities.

“We need to debate on deterrence instead of base strike capabilities,” Kono told reporters Monday.

“Be it cyberwarfare or information warfare, we need to think about how to respond to gray zone situations,” he said.

Defense of the Senkakus will feature prominently in the policy debate. Beijing claims the Japan-administered islands as the Diaoyu.

This February, China implemented a law empowering its coast guard to use weapons to fire on foreign vessels it sees as illegally entering its waters.

Kishida also called for new legislation that would facilitate and enhance coordination between Japan’s coast guard and the Maritime Self-Defense Force.

Takaichi has called for legislative revisions to grant the coast guard greater authority to use weapons to respond to Chinese coast guard vessels.

Kono wants coordination with Japan’s biggest ally. “It’s crucial for Japan and the U.S. to first make a decisive plan,” he said in a television appearance Saturday.