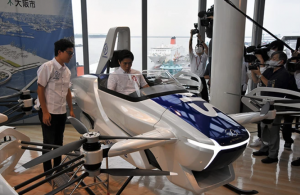 Osaka Governor Hirofumi Yoshimura sits in a prototype of a flying car in Osaka’s Suminoe Ward on Sept. 14. (Itsuki Soeda)

OSAKA–Flying cars are one step closer to ferrying attendees of the 2025 Osaka Kansai Expo around the exhibition halls as a means of transportation, fulfilling the vision of local officials here.

The city government of Osaka, together with the Osaka prefectural government, on Sept. 14 signed a partnership agreement with SkyDrive Inc., a Tokyo-based entrepreneurial venture that develops drones for logistics.

“Taking on a new challenge is one of Osaka’s strengths,” Yoshimura said. “The image of it flying in the sky above resembles a sci-fi movie, and I want to make it happen.”

SkyDrive launched a project to develop a flying vehicle in 2018 and has conducted demonstration experiments and analyses as well as manned flying experiments.

Its latest prototype is a single-seated vehicle 2 meters high and 4 meters in width and length.

The flying vehicle is equipped with eight electric propellers and can fly at a maximum speed of 40 to 50 kph for 5 to 10 minutes at a time.

Before such flying cars are put to work at the Expo, legislation still has to be passed allowing their use, city officials said.