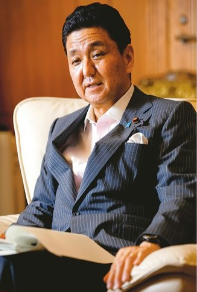 At the end of August, the Ministry of Defense announced its FY2022 budget request includes the deployment of a missile unit to Ishigaki Island (Ishigaki City) in Okinawa Prefecture and the acquisition of additional F-35s, the advanced U.S. stealth fighter. The budget request strongly focuses on improving deterrence against China, which is building up its military. Mainichi Shimbun’s Hatayama Shu sat down with Defense Minister Kishi Nobuo, who has been leading Japan’s defense policy since assuming office in September 2020, and asked him for his views on the regional situation today and the direction Japan should take to strengthen its defense capabilities.

China has been making steady and large increases to its defense spending without any transparency. China’s defense spending for 2021 is estimated to be about four times that of Japan. Vessels belonging to the China Coast Guard have repeatedly intruded into Japan’s territorial waters around the Senkaku Islands. Such attempts to change the status quo are totally unacceptable.

In February, China enforced a new coast guard law, which includes problematic provisions in terms of consistency with international law. Sources of inconsistency include, among others, ambiguity as to geographical areas the law applies and how the rules governing the use of weapons are implemented. The law must not undermine the legitimate interests of other countries, including Japan.

Regarding the issues concerning Taiwan, Japan’s position remains unchanged: we hope that the issues will be resolved peacefully through direct dialogue between the parties concerned (China and Taiwan).

The Japan-U.S. Defense Ministers’ meeting in March, the Japan-U.S. Summit in April, and the G7 leaders’ communiqué in June all recognized the importance of peace and stability in the Taiwan Strait and the peaceful resolution of cross-strait issues. The stability of the Taiwan situation is important not only for Japan’s security, but also for the peace and stability of the international community.

Taiwan lies within a stone’s throw from Japan. What happens in Taiwan happens in Japan. Taiwan is also an important friend of Japan, sharing the universal values of freedom, democracy, and human rights. Although Japan and Taiwan enjoy only nongovernmental, working-level ties, there is a lot of exchange happening in various fields. We should pay close attention to it.

In the Cabinet decision made last December, the government decided to continue to look into strengthening deterrence. Deterrence means, for example, the ability to make a nation that is thinking of launching a missile at Japan decide otherwise. Is it really possible to protect the lives of the people and their peaceful way of life by simply improving interception capabilities? With this question in mind, the government is continuing to study the issue of strengthening deterrence. As the security environment is becoming increasingly harsh, we believe we have no time to lose.

With regard to the ground-launched intermediate-range missiles, the U.S. has explained to Japan that Washington is not ready to immediately deploy the missile anywhere; no specific deployment sites have been considered; and the U.S. has not approached any of its allies about accepting or deploying missiles. We will continue to work closely with the U.S. to further strengthen the deterrence and response capabilities of the Japan-U.S. alliance.

As for defense spending, since the fiscal 1987 budget, the government has not specifically taken the approach of keeping the defense-related budget within 1% of the nation’s GDP. Every year, the necessary expenses are appropriated based on the Medium Term Defense Program. The security environment surrounding Japan is becoming increasingly harsh. We need to strengthen our defense capabilities at a drastically different pace than before in order to protect the lives of the people and their peaceful lives.

Eight years have passed since the formulation of the National Security Strategy (NSS). We need to constantly review whether the NSS is appropriate in light of the current security situation. This does not mean, though, that we have a specific plan to revise it at present.