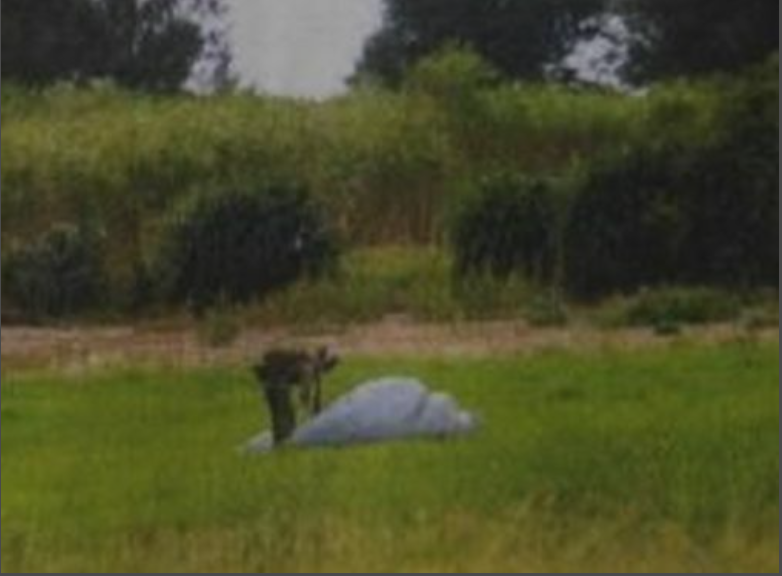 A person who appears to be an American soldier retrieves a parachute in a field in Ie Village on Sept. 21. (Photo courtesy of Ie Village assembly member Naka Minoru.

At around 4:20 p.m. on Sept. 21, two U.S. Marines landed on private property outside the areas Japan provides to the U.S. military, after being carried by a gust of wind during parachute drop training at the U.S. military’s Ie Jima Auxiliary Airfield in Ie Village. According to the Okinawa Defense Bureau (ODB) and the Okinawa Prefectural Government, one of Marines landed on a beach along the coast about 1.2 km away from the southern side of the fence of the airfield and the other landed on a field some 200 m away from the southern side of the fence. No personal or property damage has been reported.

The ODB informed the prefectural government [of the incidents] at around 8:00 p.m. on Sept. 21. On Sept. 22, it asked the ODB and the U.S. Marine Corps in Okinawa to take all possible measures to identify the cause and prevent recurrence.

The ODB told the U.S. that the incidents are regrettable and called for quick notification and investigation into the cause of the accidents as well as appropriate and effective preventive measures. “Such accidents could lead to something serious,” said an ODB representative. “Anything that could cause local residents anxiety and concern and accidents and incidents that could damage trust in the U.S. military should not happen. We will continue working to prevent recurrence.”

Following the recent accidents in which two U.S. soldiers landed on property outside the areas Japan provides to the U.S., Governor Tamaki Denny expressed a sense of crisis during an interview with the Ryukyu Shimpo on Sept. 22, saying, “We cannot overlook the fact that [the U.S. soldiers] landed on private property.”

On Sept. 22, the prefectural government made a verbal protest to the ODB and the U.S. Marine Corps in Okinawa, saying, “Though no direct damage has been reported, the incidents are regrettable because they could lead to a serious accident and they cause anxiety among local residents.”