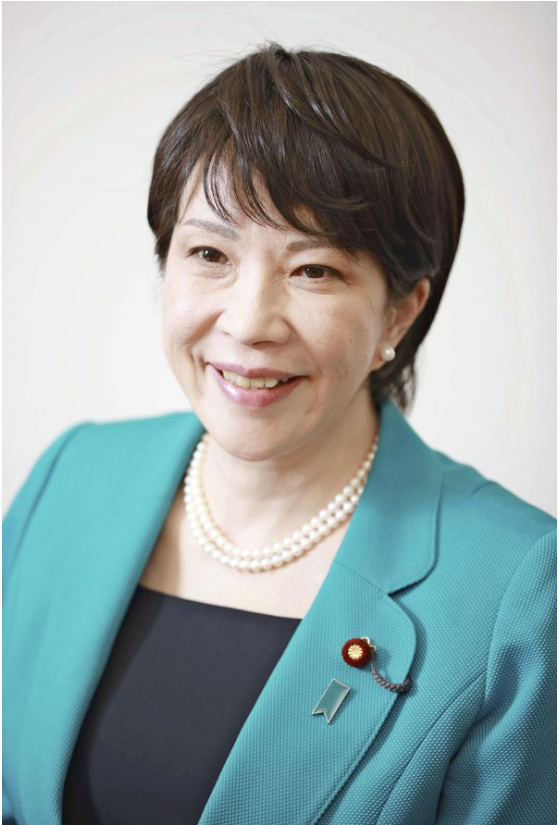 The Yomiuri Shimbun / Sanae Takaichi speaks in an interview in Chiyoda Ward, Tokyo, on Sept. 19.

The Yomiuri Shimbun has interviewed each of the four candidates in the Liberal Democratic Party’s presidential election about their policies and political stances. The following is excerpted from the interview with Sanae Takaichi, 60, a former internal affairs and communications minister.

The Yomiuri Shimbun: Former Prime Minister Shinzo Abe has declared his support for you.

Sanae Takaichi: Since February this year, I’ve had a series of study meetings with Mr. Abe on the economic policies that were left unfinished by the Abe Cabinet. I’ve asked him several times to become prime minister again, but he turned down my requests, saying he would support Prime Minister Yoshihide Suga. In late July, I made up my mind to run [for LDP president]. Mr. Abe encouraged me, saying, “If you do, aim to have a genuine administration.” I was also told that the new prime minister would be in charge during the important period that would deal with the most serious issue of what the proper form of the Imperial Household should be.

Q: What is the personnel plan for the Takaichi administration?

A: It’s “the right person in the right place.” Even if someone has no faction affiliation, or belongs to a faction that is hostile to me [during the presidential race], I must devise the best lineup for my administration. We have to firmly tackle economic policies, in particular. The job won’t get done unless [I choose] people who can handle these tasks with dedication and extensive knowledge.

Q: Seiko Noda, executive acting secretary general of the LDP, has said that half her cabinet members would be women.

A: If the cabinet is to be formed with the idea of “the right person in the right place,” numerical targets are impossible.

Q: Do you plan to ask Abe to take on a key portfolio?

A: Mr. Abe laughed when I told him I would run for party president and asked him to become one of my staff as deputy prime minister and foreign minister, citing the fact that former Prime Minister Taro Aso is deputy prime minister and finance minister. I’m still in the process of campaigning for the presidency, so I haven’t thought about it in concrete terms. But, I have no experience of working at the Prime Minister’s Office, although I was a cabinet minister.

I want to get advice from Mr. Abe as to how to manage the Prime Minister’s Office.

Q: Taro Kono, minister in charge of administrative and regulatory reform, has said, “There will eventually be no nuclear power stations.”

A: As with the response to the novel coronavirus, I’ve learned that we need to make preparations at a very early stage. We need a stable supply of electricity to provide medical care. It’s predicted that for information transmissions alone, power consumption in 2030 will be 30 times the current level. We must build a highly stable power supply system. It’s unfeasible to do so without nuclear power.

I won’t deny [the merits of] renewable energy, but it’s highly risky for us to depend too much on solar and wind power.

Q: Would you accept a female emperor?

Q: You’ve made it clear that you would continue to visit Yasukuni Shrine even after you became prime minister.

A: Visiting the shrine should not be a diplomatic issue. Every country should show respect for the citizens of other nations who sacrificed their lives for their country. I’ve often visited Arlington National Cemetery, where war dead are buried, when I’ve gone to the United States. I’ll carefully explain my thoughts on this matter to the U.S. president.

Q: What policy would you like to pay special attention to, besides the economic and security policies you have chiefly been advocating?

A: I really want to improve how people are informed about public assistance systems. There have been many cases in which people died without receiving livelihood assistance, or people in poor families gave up on higher-level education, because they didn’t know about available support systems. This is truly regrettable. I want to increase opportunities to tell people, at such milestone events as high school graduations and coming-of-age ceremonies, that “you can get help here if you’re really struggling,” and give them a list of organizations they can consult.

■ Her firm, sincere views are rooted in deep study

Keiji Furuya, former chairman of the National Public Safety Commission, offered the following characterization of Sanae Takaichi, whom he supports:

Takaichi has convictions, and the power to convey her message, which she has nurtured over many years. Among all the candidates, only Takaichi is a true conservative. She has a hawkish image, but this is inaccurate. In addition to economics and security, she also has concrete policies in such areas as welfare, agriculture, forestry and fisheries, and support for socially disadvantaged people. She can devise policies and has firm, sincere beliefs.

She was always carrying materials with both hands when I would see her returning to the dormitory for House of Representatives members. She’s studious and speaks on the basis of objective figures, so her words are convincing.

And she never speaks ill of others.

When she made the rounds greeting Diet members, seeking support in the [LDP] race, she went all alone, without a large group of colleagues. This is her nature of having no faction affiliation. We’ve worked together, beyond factional barriers, firmly believing she is “the best person to protect Japan.” Particularly because it is a conservative party, the LDP will strongly embrace diverse opinions. Sanae Takaichi is the best representative of those values.