TOKYO/WASHINGTON — Membership bids filed just days apart by Beijing and Taipei have turned the 11-nation CPTPP trade bloc into the latest flashpoint in the push to build a global, rules-based trade order.

Originally conceived to counter Beijing’s growing economic clout in the Pacific Rim, the Comprehensive and Progressive Agreement for Trans-Pacific Partnership has seen its members split in their response to the dueling bids. With the U.S. no longer part of the framework, Japan now faces a challenge in trying to keep the bloc unified over its founding principles on transparency and market access.

“Taiwan is an extremely important partner with whom we share basic values like liberty, democracy, human rights and the rule of law, as well as a close economic relationship,” he said.

“We will need to carefully assess whether Taiwan can fully meet the high standards” set by the CPTPP, Motegi said.

By contrast, China’s application on Sept. 16 did not elicit such a warm reception from Motegi. He skipped the word “welcome,” saying only that Beijing’s ability to meet the pact’s standards needed to be ascertained. 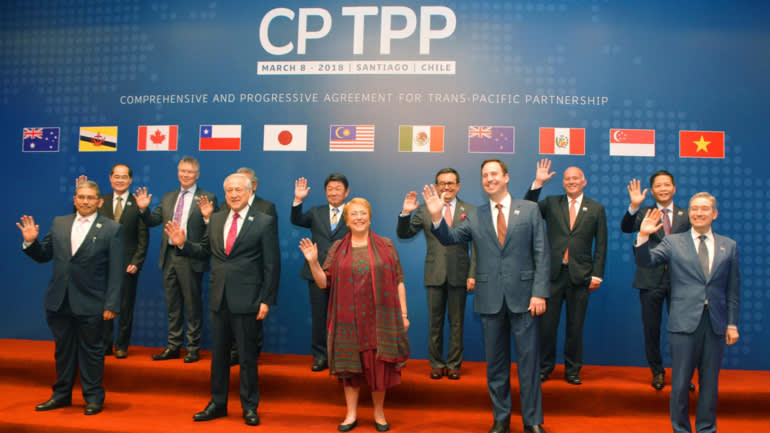 With ambitious rules to liberalize trade and promote transparency in investment, the CPTPP was designed to create a large-scale economic zone along the Pacific Rim as an alternative to the Chinese trade regime, which has enforced rules advantageous to domestic industry.

But the exit from the predecessor pact by the U.S., one of its leading architects, under President Donald Trump changed the dynamic. China now seeks to fill this vacuum — and if it does, it will have what amounts to veto power over new applicants.

“China has been obstructing Taiwan’s international presence. If China is admitted into CPTPP ahead of us, it will definitely risk Taiwan’s entry to the trade bloc. It’s a very obvious fact,” top Taiwan trade negotiator John Deng told reporters Thursday.

Beijing has also imposed trade restrictions on Australia after Canberra called for an independent inquiry into the origins of the coronavirus. There is concern that Chinese membership could undermine the CPTPP’s commitment to upholding a liberal and rules-based trade order.

National security concerns will likely factor into the bloc’s decision as well, given the rising tensions in the Taiwan Strait.

All CPTPP members must agree in order to admit a new member. Many countries have taken a wait-and-see stance on Taiwan’s application for now.

“Canada will work with other CPTPP members to reach consensus when considering any economy interested in joining,” the Canadian Foreign Ministry told Nikkei on Wednesday. “Aspirant economies must be able to meet and comply with the CPTPP’s high standards and ambitious market access commitments,” it said.

“Australia will work with the CPTPP membership to consider Taiwan’s application on a consensus basis” with others in the bloc, Australian Trade Minister Dan Tehan said Thursday.

Singapore and Malaysia have welcomed China’s bid but have remained mum on Taiwan’s application.

China considers Taiwan part of its territory and is expected to ramp up diplomatic pressure on CPTPP members to prevent the island from joining. Whether the bloc can maintain a united front on the issue remains to be seen.

Meanwhile, Motegi on Wednesday urged the U.S. to rejoin the Pacific trade deal in a meeting with Secretary of State Antony Blinken, according to the Japanese Foreign Ministry.

But the chances of this appear slim. The CPTPP faces opposition from both labor unions — a key support base for U.S. President Biden’s Democratic Party — and many members of the opposition Republican Party. The Biden administration has little political capital to spare ahead of the 2022 midterm congressional elections, which are expected to be a struggle for Democrats.

White House press secretary Jen Psaki has said Biden is not looking to rejoin the CPTPP at this stage. As an outsider, Washington can only nudge the pact’s members through diplomacy not to side with Beijing over Taipei.

As a Group of Seven member, Japan has a responsibility to defend the rules-based order. Motegi also met with British Foreign Minister Liz Truss during his U.S. trip to discuss the U.K.’s negotiations on joining the CPTPP.

The U.K. has traditionally been a proponent of free trade. Tokyo hopes that negotiations with London could help solidify the CPTPP’s rules on trade liberalization and transparency, which in turn could strengthen the bloc in its dealings with Beijing.