More evacuation orders to be lifted in Fukushima for some areas 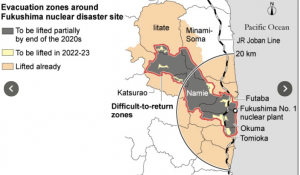 Shrouded in trees and weeds as tall as people, his old house rests quietly in a difficult-to-return zone in the Tsushima district of Namie, Fukushima Prefecture, only some 30 kilometers from the hobbled nuclear plant.

“I can finally see light at the end of the tunnel, although there will likely be a race against the clock of my lifetime,” said Yoshito Konno, 77. “I wish to be comfortably back in my hometown while I am still healthy enough to be moving around.”

The central government announced it will lift evacuation orders by the end of the decade for residents who wish to return to their homes in the last remaining difficult-to-return zones around the Fukushima No. 1 nuclear power plant.

The new policy was approved at a joint meeting at the end of August by the Reconstruction Promotion Council and the Nuclear Emergency Response Headquarters.

But the government has no prospect of totally lifting evacuation orders for all the difficult-to-return areas as the new policy is expected to cover only limited areas.

Konno’s home community had 262 residents from 80 households prior to the 2011 nuclear disaster.

About 45 of them, mostly advanced in age, have since died.

“Those who died while separated from their hometown must have felt so frustrated and let down,” he said. “The central government and the town government should take action as soon as possible in line with the newly approved plan.”

Currently, areas where about 22,000 residents used to live remain designated as difficult-to-return zones.

This latest decision covers sparsely populated areas which are outside the areas designated for earlier lifting and once home to some 8,000 people, who previously had little hope of ever returning given the absence of a plan for them.

Some of the more populated areas had been designated as reconstruction bases where evacuation orders will be lifted by spring 2023.

For people like Konno, the news came as a relief.

But more than a decade since the disaster, others have mixed feelings about the prospect of one day returning after finding new lives and livelihoods in the communities to which they have evacuated to.

A survey taken by the Reconstruction Agency in fiscal 2020 showed that in the four towns that contain part of the difficult-to-return zones, only about 10 percent said they wished to return.

About 50 to 60 percent of respondents from each of those towns said they did not want to return.

Kazuharu Fukuda, 50, president of a local construction company and evacuee from the town of Futaba, said he will not be returning home any time soon because he now resides and works in another town.

The central government’s plan to decontaminate areas where cleanup is necessary to allow people to return has not impressed Fukuda.

“Even if I were to return, the land plots next to mine would remain contaminated with high radiation levels and with everything left in a dilapidated state,” he said. “How could I take up residence in such a place? I want the central government to clean up all the areas and restore them to their original state before letting us decide whether to return.”

Under the new plan, which was presented by Prime Minister Yoshihide Suga during the joint meeting, residents of the areas in question will be surveyed.

After that, the surroundings of the homes of those who wish to return will be decontaminated, and the government will develop key infrastructure to facilitate their return.

There is no prospect for evacuation orders to be completely lifted in those areas because the decontamination work will be done only in limited areas at the request of those who wish to return.

The decontamination process will be funded by two special central government accounts: one designated for rebuilding from the Great East Japan Earthquake, tsunami and Fukushima nuclear disaster of 2011; and another designated for energy policy measures, financed by revenues from electricity rates.

Some areas in those zones, including the surroundings of town halls, village offices and residential districts, have been designated “Specified Reconstruction and Revitalization Bases” by the central government.

The goal is to lift the evacuation orders in those places sometime between 2022 and the spring of 2023.

The central government is funding cleanup, construction of public housing complexes for disaster survivors and other work currently under way in these locations.

The areas outside the “specified bases” account for up to 90 percent of all the landmass of the difficult-to-return zones and slightly less than 40 percent of the population. Cleanup and other related work will only be conducted in those outside areas after considering whether the residents are expected to return.

Local governments had called on the central government to set a date to lift all the difficult-to-return zones so residents outside the designated reconstruction bases will not be left behind.

The central government has so far lifted evacuation orders for areas home to about 45,000 people. Only about 14,000 of those residents–about 30 percent–have returned to their home communities, although the government has spent some 3 trillion yen ($27 billion) on cleaning up those areas alone.

The government remains skeptical that large-scale decontamination will be effective for post-disaster rebuilding, so it has decided to clean up only limited areas based on requests.