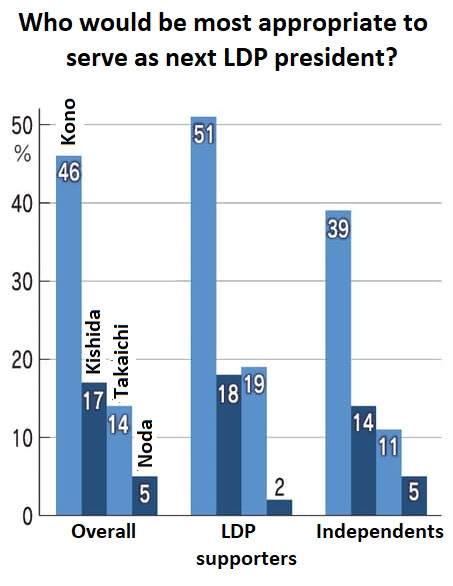 TOKYO — Taro Kono is the favorite to become the next leader of Japan’s ruling Liberal Democratic Party and effectively the next prime minister, a poll by Nikkei and TV Tokyo shows.

The opinion poll, conducted Thursday to Saturday, shows 46% of respondents picked Kono, the vaccination minister, as the “most suitable person” to succeed outgoing LDP President and Prime Minister Yoshihide Suga.

The four candidates will face off in the LDP presidential race on Wednesday. The election will count votes from lawmakers in the Diet, as well as other ballots from party members and supporters nationwide. If no candidate receives a majority, the two front-runners will head into a runoff.

The winner will become the successor to Suga, who abruptly announced his resignation at the beginning of the month.

In the opinion poll, Kono received 46% to 48% of support from all ages while Takaichi polled well with respondents in their 40s and 50s, as well as those between 18 and 39 years of age. Kishida and Noda had little difference in their approval rating between generations. 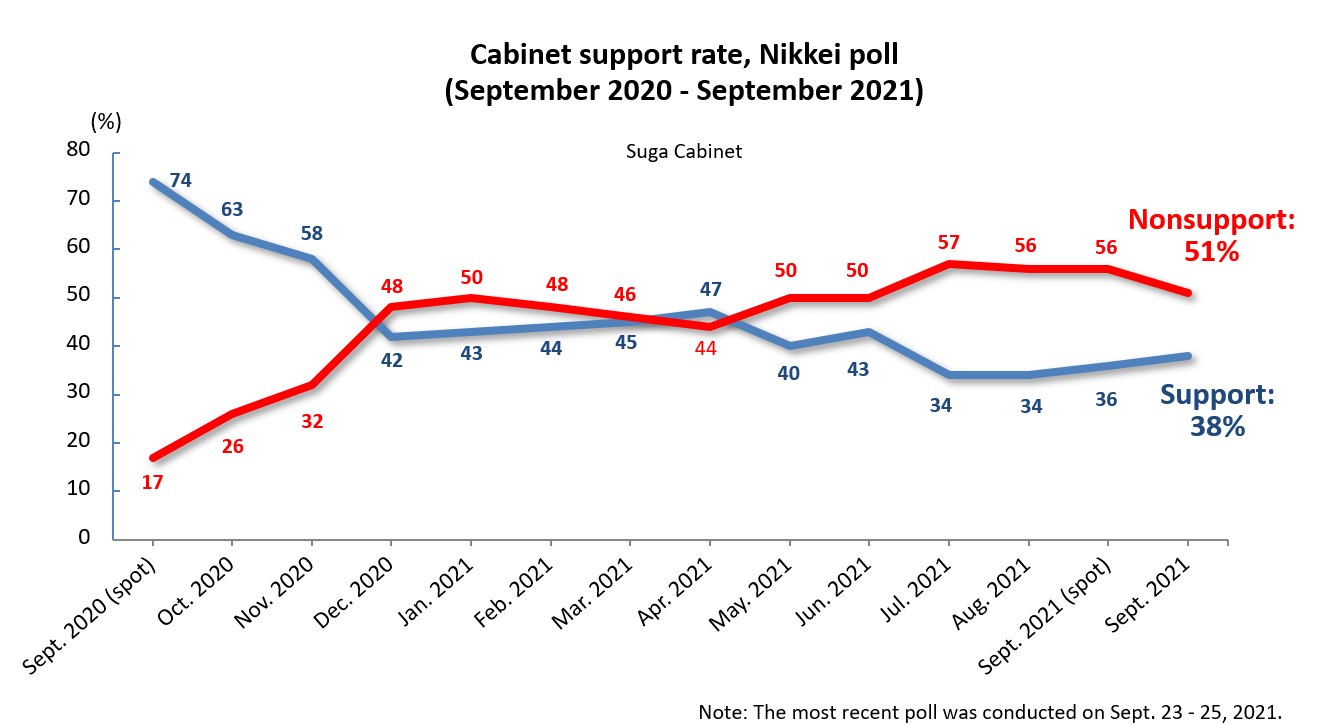 The approval rating of the Suga cabinet was 38%, almost flat from 36% in earlier this month. The percentage of respondents who did not support the cabinet was 51%, five percentage points lower than the previous survey.

Meanwhile, 51% said the government is handling the COVID-19 situation well and 43% thought the response to the pandemic has been poor — marking the first time in 11 months that more people approved of the government’s handling of the coronavirus than those who did not. 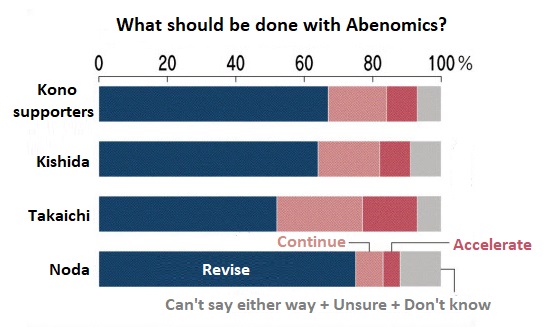 The poll found stark differences among supporters of the candidates regarding Abenomics, the signature economic policies of former Prime Minister Shinzo Abe. The “three arrows” of Abenomics — aggressive monetary easing, fiscal spending and growth strategy — were inherited by Suga, Abe’s successor. Among all respondents, 9% said Abenomics should be stepped up, 16% wanted a continuation and 61% called for a revision.

While all four candidates intend to continue monetary easing, there are differences in their views on fiscal reconstruction and how to achieve growth.

Takaichi supporters seeking an acceleration or continuation of Abenomics totaled 41%. The figure stood at 27% and 26% among backers of Kishida and Kono, respectively, and slightly more than 10% among Noda’s supporters.

Meanwhile, more than 70% of Noda’s supporters called for a revision, compared with 67%, 64% and 52% for supporters of Kono, Kishida and Takaichi.

Takaichi, who dubbed her own policies “Sanaenomics,” has pressed for even more fiscal spending. She argues for freezing the government target of achieving a primary surplus until inflation reaches 2%, and she would like to spend 100 trillion yen ($904 billion) over 10 years on public works and other projects.

Kishida seeks to narrow the gap between the rich and poor. Kono has floated tax cuts for companies that raise pay, based on the view that Abenomics has not fully spread to wages. Noda wishes to ditch the “trickle-down economics” model that says increased profits for large corporations will benefit smaller companies and households. 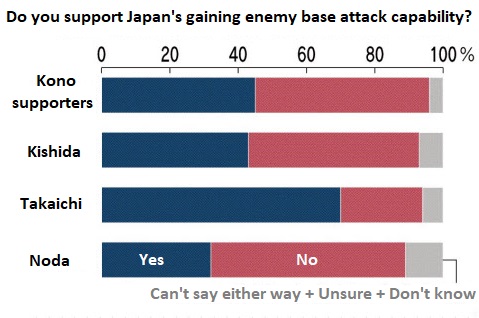 On national security, 44% of all respondents said Japan should acquire the ability to attack an adversary’s bases to prevent an attack on Japan, while 47% were against it.

Among Takaichi supporters, 69% were in favor of acquiring that capability, compared with 45%, 43% and slightly over 30% for backers of Kono, Kishida and Noda. 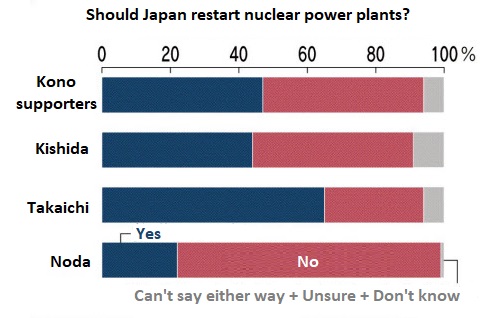 The survey was conducted by Nikkei Research by telephone using the random number method, including mobile phones. It drew 996 responses from people aged 18 or older, for a response rate of 44.8%. (All graphics were added by JMH based on graphs on page 3 of the April 26, 2021, issue of the Nikkei.)