49% say party president is important factor in deciding their vote in next LH election, Nikkei poll 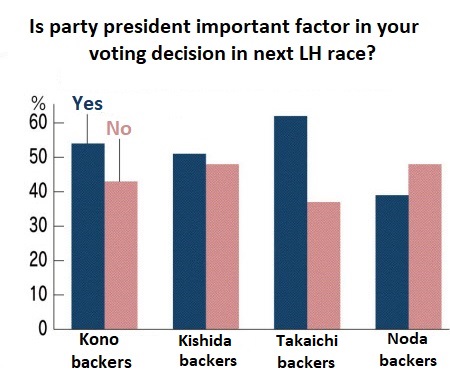 In the nationwide public opinion poll conducted by the Nikkei on Sept. 23–25, some 49% of respondents said they will heavily factor in the political party’s leader when deciding how to vote in the next House of Representatives election. Meanwhile, 46% of pollees said the party president will not be a prime factor in their voting choice.

Of those respondents who said they will heavily factor in the party president, 51% said that Kono Taro is best suited to be the next Liberal Democratic Party (LDP) president. This was followed by Kishida Fumio (17%), Takaichi Sanae (17%), and Noda Seiko (4%).

The poll also probed views on which political party respondents intend to vote for in the next Lower House race and which party has candidates they want to vote for. Over half of respondents (52%) said they will vote for the LDP, which is almost unchanged from the spot survey conducted on Sept. 9–11. Those saying they will vote for the various opposition parties was also virtually unchanged from the previous survey (Constitutional Democratic Party of Japan, 10%; Komeito, 4%; the Japanese Communist Party, 4%; and the Nippon Ishin (Japan Innovation Party), 6%).