TOKYO — With tensions rising between China and Taiwan, fraught cross-strait relations have emerged as a crucial topic in the ruling Liberal Democratic Party’s presidential election that will determine Japan’s next leader.

Competing applications by Beijing and Taipei to join the CPTPP trade agreement add urgency to the issue of how Japan should approach the two neighbors, with the successor to Yoshihide Suga to face difficult decisions on trade and defense policy.

Two candidates in the race, administrative reform minister Taro Kono and former LDP policy chief Fumio Kishida, have said they “welcome” Taipei’s application to the trade bloc. The other two, Sanae Takaichi and Seiko Noda — both former ministers for internal affairs and communications — have signaled that they would back Taiwan’s bid.

But they are not on the same page regarding China. Kono said China’s entry into the bloc “would not be easy,” while Noda believes that Beijing’s application deserves “serious consideration.”

The Comprehensive and Progressive Agreement for Trans-Pacific Partnership symbolizes the fraught issues involving Beijing and Taipei. The trade bloc was initially proposed by the U.S. to counter the economic rise of China. But the U.S. left the group under President Donald Trump. And the trade pact was saved from the brink of collapse by Japan’s aggressive push to put it into force.

Because the CPTPP requires members to meet high trade liberalization standards, members’ diplomatic relations play a key role in the trade alliance. The competing bids will in effect force the 11 countries to choose between China and Taiwan, with Japan’s decision carrying special weight. 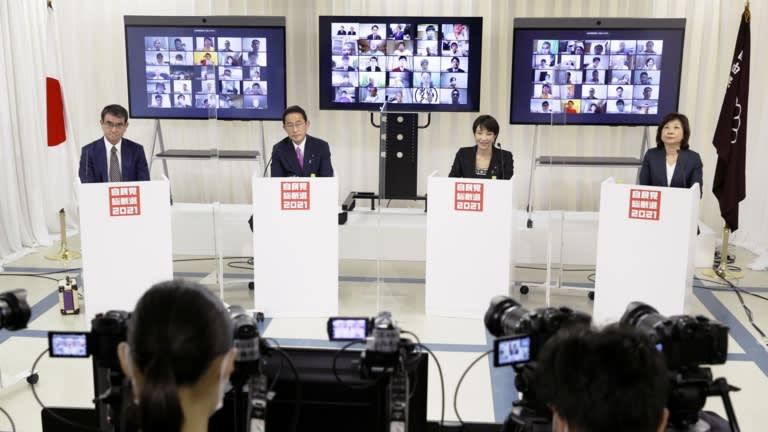 China and Taiwan also figure prominently in the Japanese debate on defense. With both defense spending and gross domestic product growing rapidly, Beijing has wielded its economic and military might to expand its sphere of influence over the past decade.

China’s defense spending doubled from 2011 to 2021. Chinese vessels daily enter waters near the Japan-administered Senkaku Islands, which China claims as the Diaoyu. At the same time, Chinese President Xi Jinping has stepped up military provocations toward Taiwan to showcase Beijing’s desire for unification.

The joint statement by Prime Minister Suga and U.S. President Joe Biden after their April summit underscored “the importance of peace and stability across the Taiwan Strait” — the first such mention of the area in half a century. A military conflict involving Taiwan, with which Japan shares such common values as democracy and freedom, would pose a grave threat to Japan’s economy and national security.

Tokyo also worries that a military conflict in Taiwan could affect the defense of the Senkakus, which sit just 170 km away from the island.

There are crucial questions that need to be answered: whether the U.S. will really get involved in a China-Taiwan military conflict, whether Japan has adequate capacity to defend itself in such a situation, and how Japan would respond to China and Taiwan.

The four candidates have not made their stances clear on these questions.

In 1971, Prime Minister Eisaku Sato was forced to contend with Sino-American rapprochement under President Richard Nixon, who had taken office in 1969. Japan was kept in the dark while the U.S. and China negotiated Nixon’s historic 1972 visit to Beijing, a trip that marked a turn in American policy toward China.

In the 1972 LDP presidential election held after Sato announced his resignation, the party was divided over whether to maintain relations with Taipei or normalize ties with Beijing. The race came down to pro-Taipei Takeo Fukuda and Kakuei Tanaka, who advocated normalizing ties with China. Tanaka prevailed in a runoff.

Fukuda, too, eventually became prime minister in 1976 and signed a peace and friendship treaty with China in 1978. After the U.S. normalized diplomatic relations with China, it made sense for Japan to deepen ties with Beijing.

But this time, America is absent from the CPTPP stage. Japan will have to make its own decision on China and Taiwan.