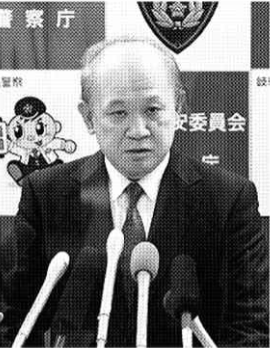 “I want to take steps toward solidifying the organizational management and future vision of the police that are appropriate for the Reiwa era,” said Nakamura Itaru, who was appointed Commissioner General of the National Police Agency (NPA) as of Sept. 22. He underscores that a global perspective is indispensable for the police in dealing with terrorism, organized crime, natural disasters, and other cases.

A supreme example of the NPA’s focus on this perspective is its handling of the threat in cyberspace. Next fiscal year, the NPA will establish a cyber bureau and launch a new investigation unit comprising about 200 officers over which the NPA will have direct control beyond the jurisdictions of prefectural police forces. Nakamura says that the NPA will respond to cybersecurity risks that are becoming increasingly serious in and outside of the country by adopting a framework of “All Japan” collaboration with the private sector and that the NPA will “contribute its technology and experience to cybersecurity.”

Nakamura served as secretary to the chief cabinet secretary under the governments led by the now-defunct Democratic Party of Japan (DPJ) and the Liberal Democratic Party (LDP) for a total of five and a half years. But he had long engaged in criminal investigations. He has a lot of experience in the investigation of corruption and other white-collar crime. When he led the second investigation division at the Metropolitan Police Department (MPD), he dealt with corruption cases involving the now-defunct Social Insurance Agency and the Secretariat of the House of Representatives.

Four years after joining the NPA, he headed the second investigation division of the Wakayama Prefectural Police. Soon after taking up the post, the investigation of a bribery case hit a roadblock. He held a series of head-to-head discussions with investigators over drinks. That experience had a significant influence on his career.

Nakamura’s subordinates describe him as a “boss who is compassionate and pays close attention to his subordinates’ performance.” He says he wants to closely listen to the voices of front-line police officers and “build a foundation” of a police organization for the new era.

Nakamura is 58 years old and originally from Fukuoka Prefecture.