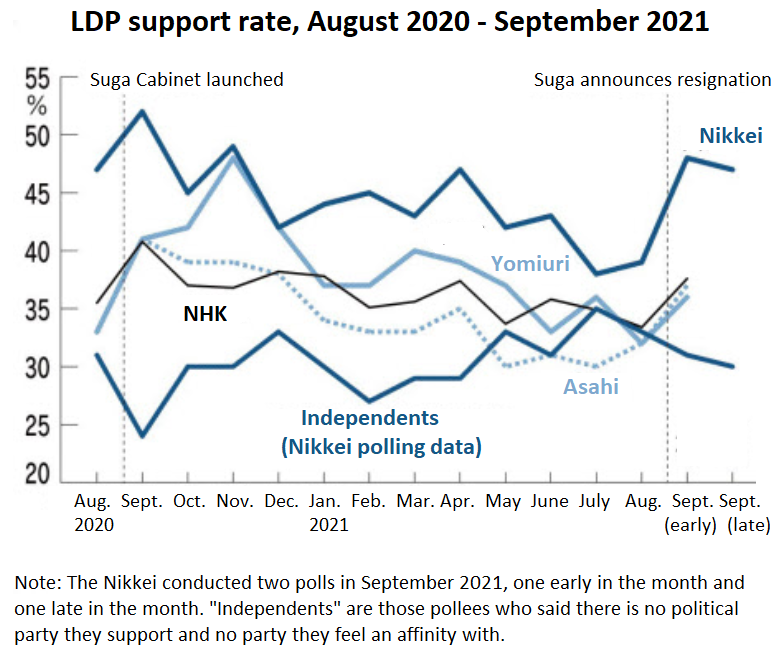 In the public opinion polls conducted in September by the Nikkei and other media outlets, the approval rate of the Liberal Democratic Party (LDP) rose. In September, Prime Minister Suga Yoshihide (LDP president) announced his resignation and four candidates threw their hats in the ring for the presidency. As a result, it seems that public support has rebounded. The opposition parties now have a heightened sense of crisis going into the general election.

On Sept. 3, Prime Minister Suga announced he would not run in the LDP presidential election. From that time, the media outlets started conducting public opinion polls. In each of the major outlets’ polls, the LDP approval rating rose from the outlets’ previous surveys conducted in August.

The Nikkei conducted two surveys, one in early September and one in late September. The LDP approval rating was 48% in the spot survey taken on Sept. 9–11 and 47% in the regular monthly survey conducted on Sept. 23–25. In the August Nikkei poll, the LDP support rate was 39%.

The LDP approval rating had been declining since April this year due to COVID-19. The two Nikkei surveys conducted in September saw party support return to about the same level as that in August 2020 (47%) prior to the inauguration of the Suga administration.

The surveys conducted by the various media outlets in early September showed the same kind of trend in the LDP approval rating. LDP backing increased by 5 percentage points to 37% in the Asahi Shimbun poll, by 4 points to 36% in the Yomiuri Shimbun survey, and by 4.2 points to 37.6% in the NHK poll.

LDP backing reached its lowest since the inauguration of the Suga administration in the July Nikkei and Asahi polls and in the August Yomiuri and NHK polls.

In September, the LDP approval rating reached its highest ever in 2021 in the Nikkei and Asahi polls.

“At one point, it was said that the LDP would lose 70 seats in the House of Representatives election or even about 100 seats if it weren’t careful,” said Deputy Prime Minister and Finance Minister Aso Taro at a meeting of the Aso faction in early September, referring to concerns that had spread throughout the LDP through August. “The situation has completely changed now. There is no longer a sense that the LDP will lose the general election,” said Aso, referring to the survey the LDP conducted in late August of the situation in all Lower House constituencies.

The activities surrounding the LDP presidential election are also seen as a tailwind for the party.

Before election campaigning kicked off on Sept. 17, candidates stepped forward one by one and announced their policies. In the end, Kono Taro, Kishida Fumio, Takaichi Sanae, and Noda Seiko threw their hats in the ring. Debates among the four candidates were held and the four have appeared more frequently on TV. Public awareness of the LDP increased as a result.

At a meeting held by the Noda camp in late September, the party approval rating became a hot topic. A variety of views were expressed: “Inactive LDP supporters who had strayed for a time have returned.” “Four people are running for the party presidency. This shows the breadth of debate within the party and has attracted the interest of independents and opposition party supporters.” 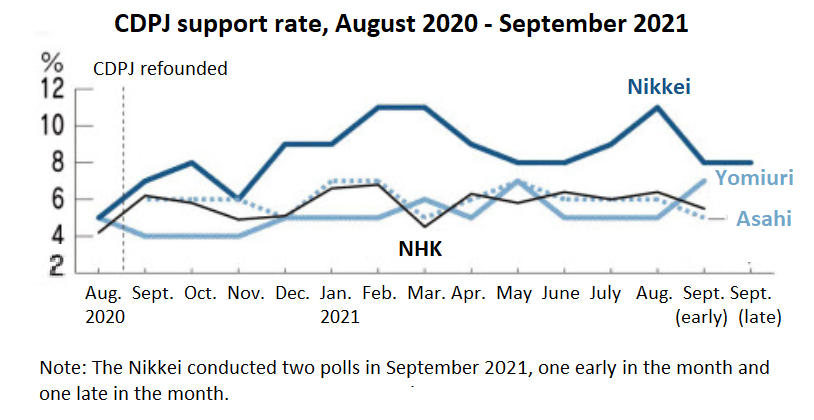 For a party to increase the number of seats it holds in the Lower House, attracting independents is key. At this point, independents are not turning to opposition parties. The party approval rating of the Constitutional Democratic Party of Japan (CDPJ), the main opposition party, was 11% in the August Nikkei survey, but it was only 8% in the September monthly survey.

At about the same time as the Suga Cabinet was inaugurated, the CDPJ was re-founded after joining hands with many members of the former Democratic Party for the People (DPFP). Nevertheless, the CDPJ approval rating has remained within the range of 6–11% in the Nikkei survey over the past year.

Through August, opposition parties hoped that they “would receive the votes of people critical of the administration if the House of Representatives election were held during the Suga administration.” Even after Suga announced his resignation in early September, the CDPJ’s approval rating remained low in other September surveys, standing at only 5% in the Asahi poll, 7% in the Yomiuri survey, and 5.5% in the NHK poll.

In September, the CDPJ, the Japanese Communist Party, Nippon Ishin (Japan Innovation Party), and the DPFP will gradually announce the policies that will make up their campaign platform for the general election. Ruling coalition partner Komeito will also release its campaign pledges. If parties announce their policies gradually rather than all at once, they will have more opportunities to attract the interest of the public.