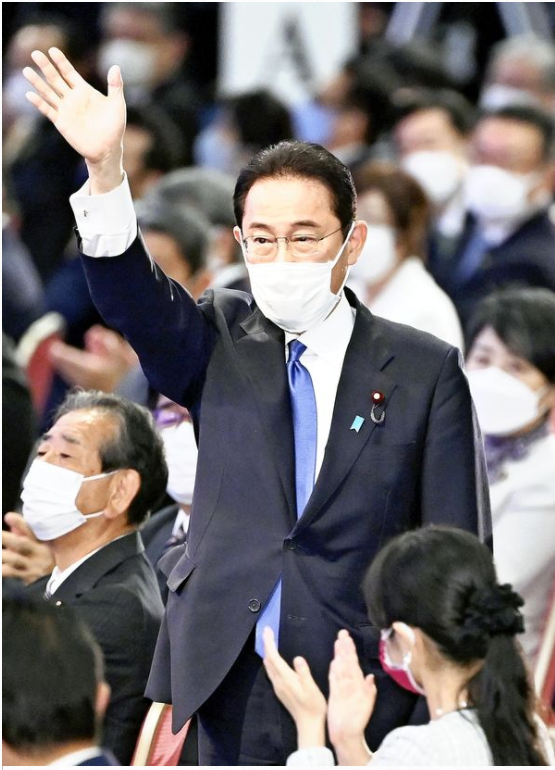 The Yomiuri Shimbun / Fumio Kishida waves upon his election as the new Liberal Democratic Party president on Wednesday.

The following is an excerpt from Fumio Kishida’s victory speech delivered after being elected as president of the Liberal Democratic Party on Wednesday:

“About a month ago on Aug. 26, I announced my candidacy for the presidential election. Many people had urgently called out that their voices do not reach political ears or that they cannot trust politics. I felt a strong sense that a crisis was at hand, that democracy in our country is in peril, so I decided to run for president before anyone else.

“We will have the House of Representatives election, followed by the House of Councillors elections. We must show the public our renewed LDP and call for their support. The presidential election has ended. The competition is over. Like a baseball team, all members of the LDP should fight as one in the lower and upper house elections.

“The national crisis in our country continues. We must keep putting efforts into coronavirus control with a desperate commitment. We must come up with ¥10 trillion in economic measures by the end of the year.

“In the future, our country will face a host of crucial challenges, including new forms of capitalism, the realization of a free and open Indo-Pacific, and measures to address the low birthrate.

“From today, I’ll start down this path as your leader with all my might. I hope all party members across the country and members of the Diet will join me. Fumio Kishida’s specialty is carefully listening to people’s stories. So please, everyone, join me as I strive for an open LDP and a bright future for Japan.”