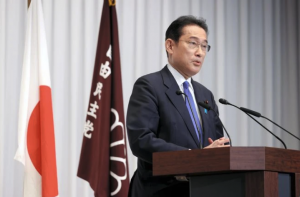 Fumio Kishida speaks at a news conference held at the headquarters of the Liberal Democratic Party after he was elected as party president in Tokyo on Sept. 29. (Hikaru Uchida)

Fumio Kishida, the ruling Liberal Democratic Party’s former policy chief, was elected the new party president on Sept. 29 in a resounding victory in the high-stakes political battle that has secured him the nation’s top job.

Kishida defeated Taro Kono, the state minister in charge of administrative reform, in a runoff between the two top vote-getters in the first round of the LDP leadership poll, which was unusually held in the shadow of a looming Lower House election.

Kishida, who was the first lawmaker to enter the race before Prime Minister Yoshihide Suga announced he would not seek re-election, painted a gloomy picture of the political situation in Japan.

“The nation’s democracy is in crisis as public trust in politics, the foundation of democracy, has seriously eroded,” he said.

The challenge of regaining the people’s trust requires him to liberate politics from the negative legacies of his two predecessors.

The tattered credibility of politics is a consequence of former Prime Minister Shinzo Abe’s seven years and eight months in office and the brief tenure of his successor, Suga, whose administration fell into the morass of incompetence in just one year.

The challenge will test Kishida’s commitment and ability to push through necessary reforms.

None of the four candidates who ran in the LDP presidential election emerged as a clear front-runner. Public attention was focused on the votes of card-carrying members and registered supporters of the party, which were expected to reflect, more or less, the pulse of public opinion.

Kono came out on top by winning 44 percent of these votes, against Kishida’s 29 percent. But the total number of votes Kono garnered, including those of LDP Diet members, fell one vote short of the ballots cast for Kishida.

In the runoff, which gave far less weight to local votes, Kishida defeated Kono hands down, securing two-thirds of the votes cast by lawmakers.

Kono campaign’s strategy was aimed at winning an overwhelming majority of the local votes. The campaign bet that Kono’s popularity among the rank-and-file party members would lure Diet members wanting a new leader who, as the public face of the LDP, can lead the party to a victory in the crucial general election.

But the strategy failed to work. Many of the 114 lawmakers who voted for Sanae Takaichi, a former internal affairs minister, in the first round apparently supported Kishida in the runoff, handing him a big lead over Kono.

Takaichi and another female presidential hopeful, Seiko Noda, the LDP executive acting secretary-general, made the roster of candidates equally divided between the sexes. During election debates, issues such as child care support were discussed more rigorously than usual.

A group of young and middle-ranking party members who have been elected to the Diet three times or fewer launched a cross-faction campaign to cast votes according to their own judgment without being bound by their factions.

In the end, however, the winner of the election was determined through the dynamics of old faction politics, a game for bigger numbers in Nagatacho, Japan’s political power center.

Abe and other LDP heavyweights used their massive political clout to influence the election results. This is far from what Kishida described emphatically as a “regenerated LDP” in his victory speech.

In fact, Abe played the pivotal role in the race by pulling a lot of strings behind the scenes. Takaichi, who was said to be hard-pressed to secure the endorsement of the required number of party lawmakers to run, won more lawmaker votes than Kono.

The credit for her unexpectedly strong performance should go to Abe.

Abe has strong influence over a wide range of LDP legislators, not only the members of the largest faction led by Hiroyuki Hosoda, which was once headed by Abe himself, but also many young lawmakers who were first elected to the Diet while Abe was in office.

Political pundits say Abe helped Kishida win in the runoff to prevent the election of Kono, who teamed up with Shigeru Ishiba, a former LDP secretary-general, known as a vocal critic of Abe.

To our disappointment and concern, Kishida made a series of remarks during the campaign that were clearly designed to show deference to Abe and gain his favor.

With regard to the issue of Finance Ministry officials falsifying public documents related to the dubious sale of state-owned land to the Moritomo Gakuen educational institution, Kishida has disavowed any intention to order a new investigation.

Kishida’s refusal to launch a fresh inquiry into the scandal that hit the Abe administration is at odds with his acknowledgment that the public called for more actions to uncover the facts.

Kishida has also switched from promoting to demurring at the proposal to allow married couples to use separate surnames in official documents. He has showed a willingness to carry on Abe’s efforts to have the Diet initiate four amendments to the Constitution, including one to establish a constitutional status of the Self-Defense Forces.

He has also displayed a positive stance toward the idea of giving the SDF capabilities to strike enemy bases, saying it is an “option.” He also voiced clear “opposition” to accepting a female-line emperor, or an emperor descending from the maternal line.

These remarks cast serious doubt on Kishida’s commitment to cleaning up the negative legacies of the Abe administration and raise concerns that Abe’s influence over the government could become even greater.

Kishida blames the neo-liberal economic policy for wider economic disparities in Japan and calls for a “new Japanese-type capitalism” driven by a virtuous cycle of growth and redistribution.

With the COVID-19 state of emergency for wide areas in Japan set to be lifted, Kishida will face the tricky challenge of striking a good balance between preventing the spread of the new coronavirus and supporting recovery from the downturn caused by the pandemic.

He has promised to map out plans to prepare the nation for the worst and explain them meticulously to the public. If he intends to pursue a new approach to tackling the health crisis based on lessons learned from the failed policies of the Abe and Suga administrations, Kishida needs to free his leadership from Abe’s influence.

His picks for the top party posts and the Cabinet portfolios will be the first acid test.

One of Kishida’s key campaign promises was reform of the party. As a step to appoint more young and middle-ranking lawmakers to key party posts and prevent a concentration of power and leadership inertia, he pledged to limit the maximum period of service of a party executive to three consecutive one-year terms.

Kishida was right when he argued that no serious effort has been made to revamp the party’s management even though the introduction of single-seat constituencies has sharply increased the power of the party headquarters. We are eager to see him tackle head-on the mission of creating a new governance system for the ruling party.

Kishida has also promised to ensure detailed and convincing explanations and transparency in dealing with the issue of “politics and money.”

A good start would be to order the party’s own rigorous scrutiny of its decision to provide 150 million yen ($1.3 million) to the campaign of Anri Kawai, who has been convicted of vote-buying through cash payments to local politicians before she won an Upper House seat in Hiroshima, Kishida’s home turf, in the 2019 election.

Both Abe and Suga showed a strong tendency to avoid Diet debate as much as possible and disregard their responsibility to fully brief the public. They displayed open hostility to opposition parties and people critical of their administrations and did not hesitate to take actions that caused a serious division.

They also made many self-righteous policy decisions that did not give expert knowledge due respect.

To restore public trust in politics, Kishida should start by showing his commitment to offering sincere explanations about his policy decisions and actions. Let us make a proposal for his first step in this effort.

After he is elected new prime minister in an extraordinary Diet session to be convened on Oct. 4, as expected, we suggest he should call a Budget Committee session.

This session would be in response to an opposition request or hold a Diet debate with other party leaders with sufficient time given, in addition to delivering a policy speech and answering questions about it from representatives of the parties.

We hope Kishida will engage in serious policy debate with opposition leaders to help voters clearly understand differences in the policy agendas of the ruling and opposition parties prior to the upcoming Lower House election.