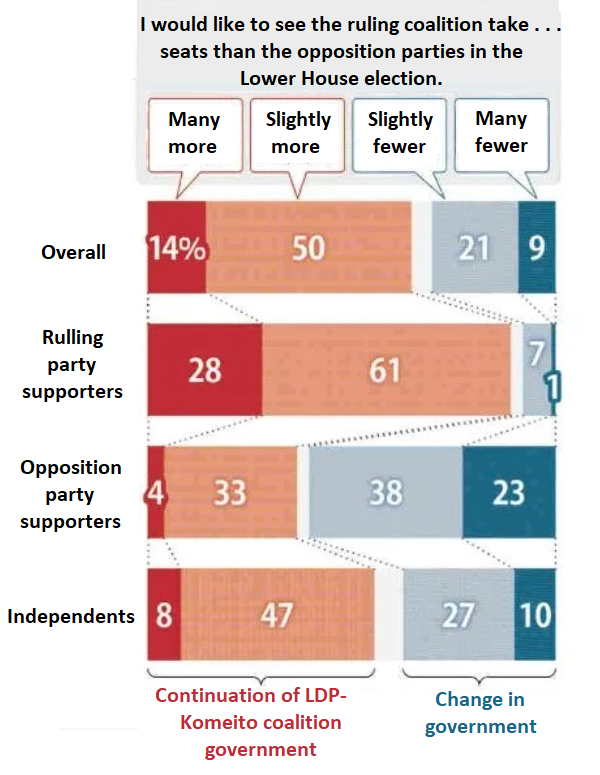 A combined 64% of respondents to a mail-in poll favor the continuation of the government run by the ruling Liberal Democratic Party and its coalition partner Komeito.

The Yomiuri Shimbun poll that spanned August and September asked about respondents’ hopes for the results of the upcoming House of Representatives election and found that 50% wanted the current ruling parties to have slightly more seats than the opposition parties and 14% wanted the current ruling parties’ seats to greatly outnumber that of the opposition parties.

The poll was conducted by sending mail to 3,000 eligible voters nationwide between Aug. 17 and Sept. 22, with 2,140 people responding.

Among respondents who support the Constitutional Democratic Party of Japan or the Japanese Communist Party, which are promoting electoral cooperation, more than 70% said the priority should be on cooperation over agreeing on policies. As for respondents who support Nippon Ishin no Kai (Japan Innovation Party), 60% said the priority should be on forming a consensus on policies.

When asked to select up to five out of 22 issues listed that respondents consider important for the election, the top three chosen were “measures against infectious diseases such as COVID-19” (69%), “social security such as health care, pensions and nursing care” (68%), and “the economy and employment” (60%).

Those three were followed by “tax reform including the consumption tax” (29%) and “measures to address the low birth rate and support for child-rearing” (27%). (Graphic created by JMH based on diagram on page 2 of the Oct. 3, 2021, edition of the Yomiuri Shimbun.)