Japan’s COVID emergency is over. Labor and chip shortages are not

TOKYO — Japan’s streets are beginning to bustle again after emerging from a monthslong pandemic state of emergency, but the country still faces an uphill slog toward economic recovery as supply chain disruptions and labor shortages drag on.

The automobile industry has been one source of concern. Amid a chip shortage that stretches to coronavirus-hit Southeast Asian suppliers, Toyota Motor will cut global production by 40% from previous plans this month and temporarily halt all vehicle plants in Japan. Honda will decrease Japanese output by 30% from previous October plans.

The Bank of Japan’s latest “tankan” survey of business sentiment published Friday underscores anxieties in the sector. The index for large automotive companies — the difference between businesses reporting favorable and unfavorable conditions — in September fell 10 points from June to minus 7. Small and mid-size companies in the field, which largely consist of parts makers, fell 4 points to 7.

“It is difficult to resolve procurement challenges in the manufacturing sector through domestic [measures],” said Taro Saito, head of economic research at the NLI Research Institute. As a first step toward an economic recovery, “Japan needs to put in place a framework to ensure the medical system won’t be overwhelmed even if cases rise, then loosen restrictions on activity as much as possible to stimulate consumer spending.” 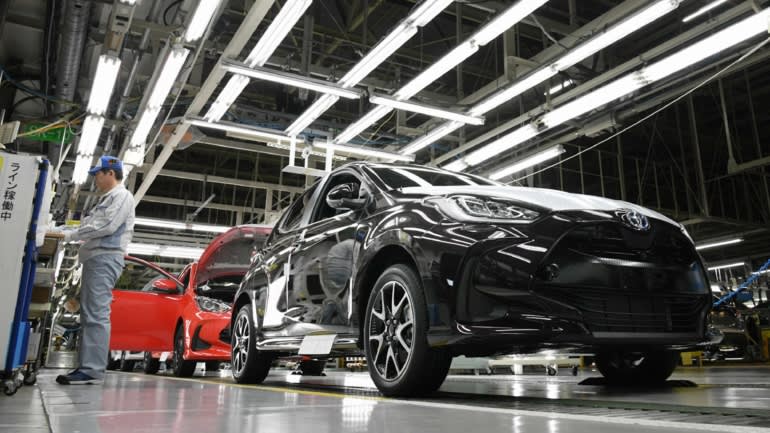 A Yaris compact car assembled at a Toyota factory in northern Japan. (Photo by Konosuke Urata)

Because automobiles require input from a wide range of other industries, steelmakers, electric machinery makers and other businesses are now predicting a downturn.

A slowdown in the global economy also hangs heavy over Japanese manufacturers, which have become increasingly reliant on overseas markets. China’s benchmark Purchasing Manager’s Index fell to 49.6 in September, slipping below the boom-bust line of 50, as a growing energy crunch squeezes factory operations there.

Manufacturing woes extend beyond the auto industry. Uniqlo operator Fast Retailing in September postponed the launch of some new items in Japan by a month, after suppliers in Vietnam shut down or reduced production due to COVID restrictions there. Other major clothing companies may also revise their schedules.

Non-manufacturers, like restaurants and other businesses driven by domestic demand, appear to be trending toward a recovery with the state of emergency lifted. The tankan index for large non-manufacturers came to plus 2, and is seen rising to plus 3 in December.

The easing of coronavirus-related restrictions will generate an economic boost of 20 billion yen ($180 million) per day in October and beyond, or over 7 trillion yen on an annualized basis, according to estimates by Toshihiro Nagahama, chief economist at Dai-ichi Life Research Institute.

But domestic-demand-focused companies are also vulnerable to supply-side problems, particularly in terms of labor. Logistics companies are scrambling to secure enough workers to handle surging package volumes. The number of part-time openings for warehouse workers and other relatively light-duty posts were up 40% across Tokyo and three neighboring prefectures in September compared with April 2020, according to the operator of the Baitoru job-listing site.

The demand for online shopping fueled by pandemic sheltering patterns has yet to ease, and the busy year-end sales season is looming. With competition for logistics workers growing, the average wage in the sector stood at 1,190 yen per hour as of September, up 17 yen.

Even with wages rising, the tankan index for employment conditions wallows at minus 17 for all industries and all sizes of companies, indicating a persistent labor shortage.

Meanwhile, restaurants that complied with recommended limits on operations lost employees to convenience stores and other places. Now they are struggling to hire people back, to the point that some locations are unable to fully reopen. The situation could pour cold water on the mood surrounding the reopening of the economy.

One key to Japan’s economic recovery is turning savings into consumer spending. As of June, Japanese households had saved up 34 trillion yen, or $306 billion, from lost spending opportunities due to the coronavirus, Goldman Sachs Japan calculates. Only about 3 trillion yen of those savings are expected to be spent over the course of a year.

While overall savings have grown, loss of income during the pandemic still weighs on the finances of many households.

“The coronavirus crisis has increased household debt,” said Naohiko Baba, chief Japan economist at Goldman Sachs. Some of the savings built up amid the pandemic will end up going toward paying off debt, at the risk of depressing consumer spending and pushing back a real economic recovery.