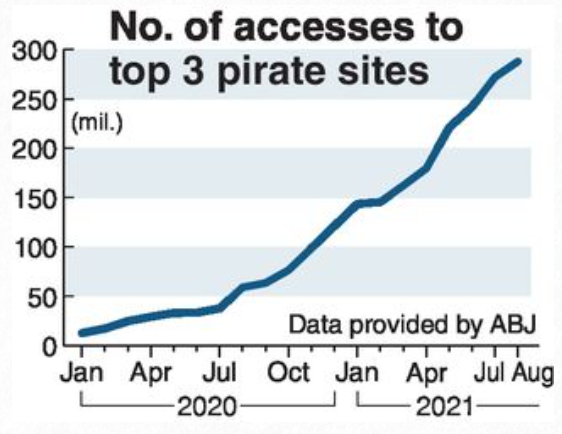 The Cultural Affairs Agency will step up its antipiracy measures and start supporting the cost of removing pirate websites in response to the growing number of manga and video works illegally available on such sites.

The agency will next fiscal year set up new consultation services and start a system to partially cover the costs necessary for affected publishers and others to request the removal of pirated sites. In an effort to foster the content industry, the agency has concluded it is urgent to maintain an environment in which creators may securely produce their works.

Many pirate websites, which post online pirated materials taken from manga and other publications without permission, operate from foreign countries, such as Vietnam. Even if small and midsize publishers are aware of the damage, under the current circumstances it is difficult for them to take measures on their own.

In the past, the agency has compiled relevant handbooks and has conducted awareness-raising activities, but this time it has decided to set up consultation services dedicated to the matter.

The agency has also decided to start a system to cover part of the cost of requesting specialized companies to remove pirated sites and also the cost of official procedures in countries where copyright registration is required.

This is the first time for the agency to establish a system to provide financial support for measures against pirated works. It has included ¥246 million for the measures in its budget request for next fiscal year.

Under the revised Copyright Law that came into effect in January, individuals who maliciously download manga and other materials from pirate sites are subject to criminal penalties.

In June, a former operator of Mangamura, a now-closed large-scale pirate site that became a societal problem, was sentenced to prison for violating the law.

Despite these developments, the damage caused by pirate sites has not subsided and in fact has been on an upward trend due to demand from people staying home in the pandemic.

According to Authorized Books of Japan (ABJ), an antipiracy group made up of publishers and telecommunications companies, the total number of accesses to the 10 main pirate sites increased to about 360 million in August from about 66 million in January last year. It is estimated that the quantity of manga read illicitly for free online from January to July was equivalent to about ¥469.8 billion worth of printed manga. The total amount for the first seven months of this year was more than double the about ¥210 billion figure for last year.

ABJ speculates that the emergence of several malicious websites comparable to Mangamura as well as the increase in the number of people who avoid going out due to the pandemic could be factors behind the rise in the number of accesses to pirate sites.