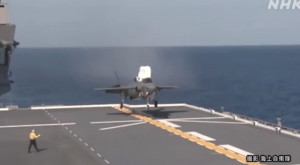 NHK, NTV, Fuji TV, and TV Tokyo reported on Tuesday evening on an announcement by the Ministry of Defense earlier in the day that two U.S. Marine Corps F-35B fighter jets belonging to MCAS Iwakuni successfully conducted a landing and take-off test on the JS Izumo in waters off Shikoku on Sunday. The networks said the ministry is planning to turn the JS Izumo into a virtual aircraft carrier and has been refurbishing the deck to accommodate the ASDF’s F-35Bs, adding that the latest test was held as part of the plan. 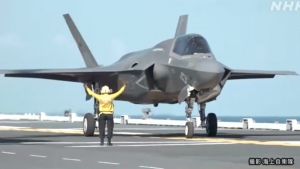 The networks showed the U.S. Marine Corps F-35Bs landing on and taking off from the 248-meter-long JS Izumo. NHK noted that this was the first time for fighter jets to take off and land on an MSDF escort vessel. The network said the Japanese government believes that turning the JS Izumo into a virtual aircraft carrier would not violate the Constitution, which prohibits the nation from possessing an “offensive carrier,” because the ASDF’s unit of F-35B fighters would not be permanently deployed on the JS Izumo. MSDF Chief of Staff Yamamura told the press on Tuesday: “The refurbishment is to further enhance the flexibility of the operation of fighter jets. We view [the JS Izumo] as a multi-functional escort ship. We will operate it for the defense of Japan.” The network added that the MSDF also plans to turn the JS Kaga into a virtual aircraft carrier.

Defense Minister Kishi told reporters on Tuesday that the test operation demonstrated the close cooperation between the United States and Japan and that confirmation that U.S. Marine Corps F-35Bs can take off and land on the JS Izumo will enhance interoperability between the U.S and Japanese forces and lead to the strengthening of the deterrence and response capability of the U.S.-Japan alliance.

Meanwhile, NHK reported that on Oct. 5 a local citizens group filed a request with the city of Iwakuni to oppose the deployment of the ASDF’s F-35Bs to the JS Izumo.