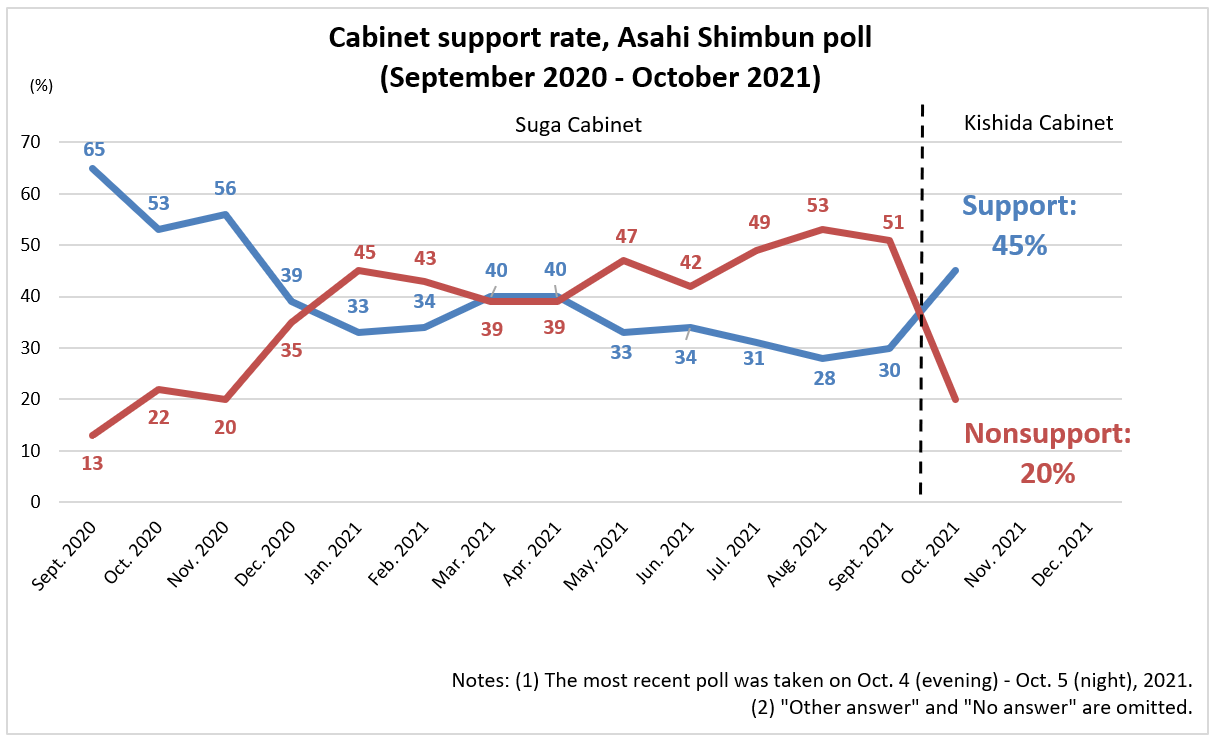 The approval rating for the Cabinet of Prime Minister Fumio Kishida was 45 percent, the lowest for a new administration since 2001, when The Asahi Shimbun began its current method of surveying voters.

The disapproval rating for the Cabinet was 20 percent, according to the nationwide telephone survey taken Oct. 4-5.

The relatively low approval rating for the just-formed Cabinet has raised concerns among lawmakers of Kishida’s Liberal Democratic Party.

“It’s alarming, given that we will soon enter the Lower House race,” said a former Cabinet member from the LDP, referring to the general election slated for Oct. 31.

The LDP, however, easily outdistanced the main opposition Constitutional Democratic Party of Japan in terms of preferred party among voters.

Forty-one percent of all respondents picked the LDP for the proportional representation segment if the election were held now, while the CDP was chosen by 13 percent.

The LDP also remained more popular than the CDP among unaffiliated voters, with 22 percent of them selecting the ruling party and 13 percent picking the CDP, the survey showed.

The LDP was the choice of 43 percent in the previous survey in mid-September.

The support rate for the ruling party had been hovering around a lowly 35 percent from May to August when Yoshihide Suga was prime minister, but it started rising on news of the LDP leadership race and expectations that the unpopular Suga would be replaced.

The approval rate for the Suga Cabinet was a dismal 28 percent in an August survey conducted shortly before Suga announced he would step down.

However, the Suga Cabinet received an approval rating of 65 percent immediately after it was formed about a year ago, much higher than the figure for the Kishida administration. 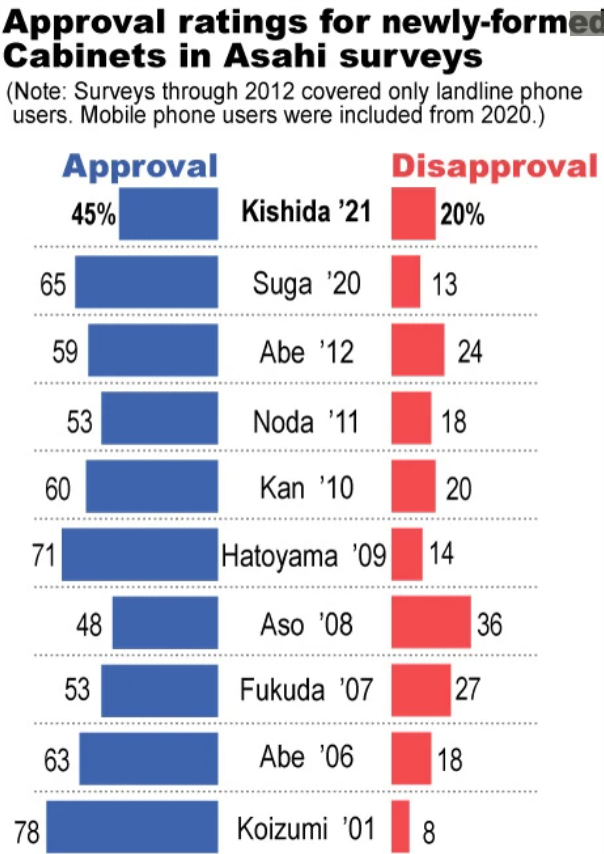 High approval ratings are usually given to a new Cabinet, and LDP sources have said they want the Lower House election as early as possible to capitalize on that trend.

Among the respondents, 35 percent “gave no or other answers” on whether they approve or disapprove of the Kishida Cabinet, the highest ratio since 2001.

These voters are apparently waiting to see how this Cabinet, which includes 13 first-time members, performs before making their positions clear.

The survey showed that 72 percent of LDP supporters backed the Kishida Cabinet.

The gap was narrowing among unaffiliated voters, with 28 percent showing approval and 22 percent voicing disapproval.

Fifty percent of unaffiliated voters “gave no or other answers.”

What appears to be behind the somewhat cool response to the Kishida Cabinet are questions over whether he will pursue his own agenda or follow the course set by Suga and his predecessor, Shinzo Abe.

Fifty-five percent of respondents replied that Kishida should set a new course for the nation, compared with 23 percent who answered otherwise.

Even among LDP supporters, nearly 50 percent took the position against following the lead of Abe and Suga, the survey showed.

Kishida had insisted on bringing middle-ranking or junior lawmakers to his 21-member Cabinet.

But he also had to appoint many members of the Hosoda faction, to which Abe belongs, and the faction led by the former Finance Minister Taro Aso. The two factions have considerable sway in the party and played a key role in helping Kishida win the LDP presidency.

One appointment that has already generated controversy is Akira Amari as LDP secretary-general, the No. 2 post in the party.

Amari resigned as economic revitalization minister under the Abe administration in 2016 after it came to light that he had accepted cash at his ministerial office from the head of a construction company in exchange for political favors.

In the LDP presidential race, Kishida, a former foreign minister and party policy chief, vowed to show a “reborn” LDP to the public.

But his Cabinet and the LDP executive lineup showed that Abe, Aso and Amari still wield enormous influence in the direction of the party.

In the survey, 54 percent said they do not believe Kishida can turn the party into a new entity, dwarfing the 24 percent who replied otherwise.

Those who support the Kishida Cabinet were evenly split over the question, with 41 percent each showing optimism or pessimism for a new LDP.

The opposition bloc has attributed the new Cabinet’s relatively low approval rate to a “failure in personnel appointments.”

The opposition parties appear ready to target Amari as a symbol of LDP corruption and erroneous appointments.

“While Kishida vowed to lead a reborn LDP, he appointed Amari as party secretary-general,” Akira Koike, head of the Japanese Communist Party’s Secretariat, said in an Asahi Shimbun interview. “That made it abundantly clear to the public that the party is incapable of soul searching.”

The survey contacted fixed telephone numbers and mobile phone numbers selected at random by computer between the evening of Oct. 4 and the night of Oct. 5.

It received 375 valid responses, or 55 percent, from 684 fixed phone numbers of households with at least one eligible voter each.

There were 597 valid responses, or 45 percent, from 1,330 mobile phone numbers of eligible voters. Valid responses totaled 972.