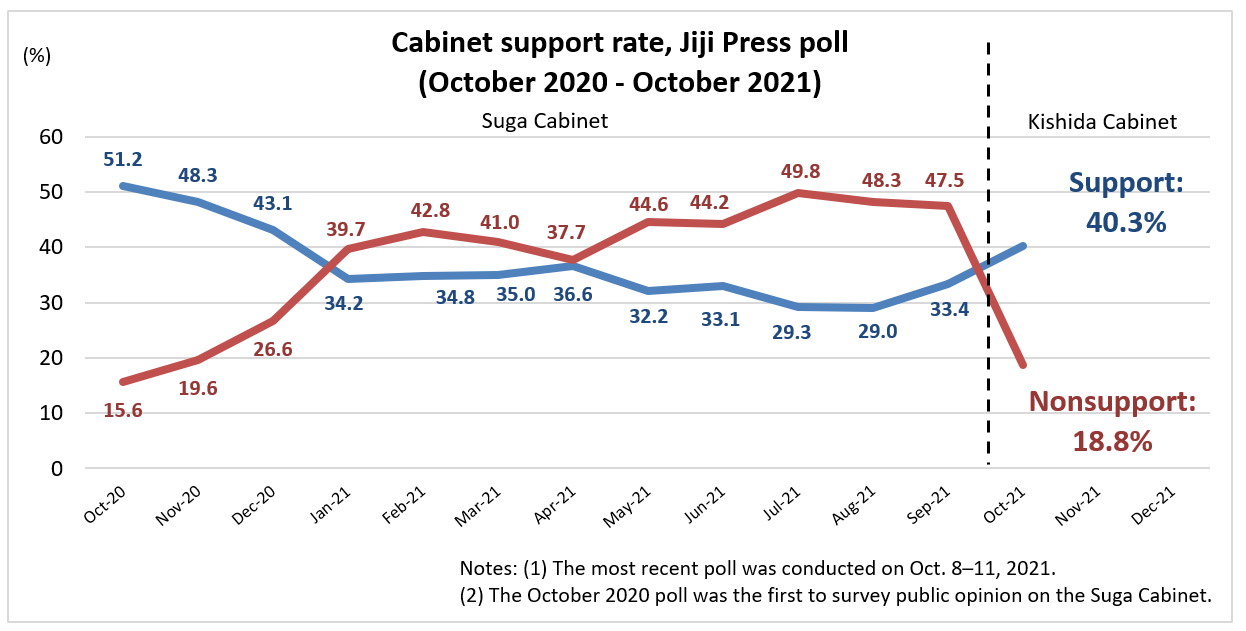 The figure was lower than the 54.0 pct and 51.2 pct recorded for the cabinets of his two immediate predecessors–Shinzo Abe and Yoshihide Suga–right after the launches of their respective administrations.

The disapproval rate for the Kishida cabinet, launched Oct. 4, came to 18.8 pct, while 40.8 pct of respondents said they “do not know,” apparently waiting to confirm any results from the new cabinet. It was the first Jiji Press monthly opinion survey on cabinet approval or disapproval since Kishida’s inauguration.

The support figure for Kishida’s cabinet was the third lowest among the cabinets of new prime ministers who took office in or after 2000, after 33.3 pct for the cabinet of Yoshiro Mori and 38.6 pct for that of Taro Aso. Although the latest support rate exceeded 33.4 pct recorded in last month’s survey for the Suga cabinet, it seems that people in Japan were little impressed by the inauguration of the new cabinet.

The survey showed that 30.3 pct are dissatisfied with Kishida’s ministerial appointments for his cabinet and executives of his ruling Liberal Democratic Party while 21.9 pct answered the opposite.

Of respondents approving the Kishida cabinet, 12.3 pct said there is no one other than Kishida who is suitable to be prime minister, 10.5 pct said they have a good image of him and 9.4 pct said they trust the new national leader.

Of those disapproving the new cabinet, 11.1 pct said they cannot expect anything from the cabinet. The proportion of those who cannot trust him and that of those who do not support his party both stood at 4.7 pct.

The LDP had a support rate of 27.4 pct, up by 0.9 percentage point from the previous month, far higher than the 3.8 pct for the main opposition Constitutional Democratic Party of Japan, up 0.8 point.

Support stood at 3.1 pct for Komeito, the LDP’s coalition partner, 1.5 pct for Nippon Ishin no Kai (Japan Innovation Party), 1.3 pct for the Japanese Communist Party, 0.5 pct for the Social Democratic Party, 0.2 pct each for the Democratic Party for the People and Reiwa Shinsengumi, and 0.1 pct for NHK to Saiban Shiteru To Bengoshiho 72 Jo Ihan De, a single-issue party critical of NHK, or Japan Broadcasting Corp., the country’s public broadcaster.

People who back no particular party accounted for 58.8 pct.

The interview-based survey was conducted over four days through Monday for 2,000 people aged 18 or over. Valid responses came from 64.0 pct.