By Nakazawa Yoshiko and Furukawa Masakazu

The Twitter account “Dappi” has posted malicious and slanderous tweets on opposition party Diet members and media critical of the Kishida administration. Konishi Hiroyuki, an Upper House member in the Constitutional Democratic Party of Japan (CDPJ) who was a victim of an attack, filed a request for disclosure of the posters’ identification, and found that the account belonged to an IT firm in Tokyo. Its primary customer was the Liberal Democratic Party (LDP).

On Oct. 6, Konishi and another CDPJ member filed a suit with the Tokyo district court for 8.8 million yen in damages for libel and for deletion of the tweets and a published apology, against a company seen to manage the Dappi account. 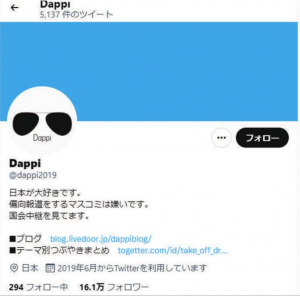 The account “Dappi” was launched in June 2019 and currently has 160,000 followers. The account’s self-introduction states, “We love Japan. We hate media that report biased news. We watch the live broadcasts of Diet interpellations.” Its tweets consist of harsh criticism against opposition party Diet members and the media, as well as praise and support for LDP Diet members. The tweets also make many references to Internet news programs, press conferences, newspaper articles, and remarks by Diet members and people on news programs.

Konishi searched for information on people who posted on the Dappi account before filing the suit. After some complex transactions, he was able to obtain an information disclosure and came across a certain company headquartered in Tokyo.

The company was established in November 2001, according to the company’s website, corporate registration, and a private credit reference agency. The company has over ten employees. Its primary business is website planning and production, production of advertising and publicity materials, consulting, and event planning. One of the company’s major customers was the “Liberal Democratic Party.”

What is LDP’s involvement with this company? Tokyo Shimbun looked at the Tokyo Metropolitan Government Election Administration’s political funds report for the Federation of Tokyo Metropolitan LDP Branches. Between 2017 and 2019 the federation paid 100,000 yen annually for “server fees” listed under “website-related costs.” The “LDP school of politics and economy, ” a training course operated by the federation to nurture young political leaders, pays the company several tens of thousands of yen per year for “audiotape transcription.”

The possibility that the LDP manipulates online information has been noted previously, aside from this case.

One such incident was revealed during the trial of Kawai Anri, who was accused of violating the Public Office Elections Law in the July 2019 Upper House election in a Hiroshima district. The oral statement of an Internet service provider, read during the Oct. 19, 2020 proceedings, revealed that Anri and her husband, former justice minister Kawaii Katsuyuki, engaged in online information manipulation.

Journalist Tsuda Daisuke says, “The fact that an incumbent Diet member was manipulating information during an election campaign indicates that negative online campaigning has become commonplace. [Information manipulation] may have become the norm in the LDP.” 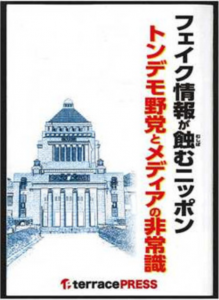 Before the start of the 2019 Upper House election campaign, the LDP headquarters distributed to its Diet members a pamphlet titled “Fake information is destroying Japan: The outrageous opposition and preposterous media” as “reference material.” The pamphlet featured demeaning illustrations of opposition party leaders and declared that media reports critical of the administration are fake news. The content was such that some Diet members called it “absurd.”

The news site “Seiji Chishin” repeatedly posts articles with false claims, such as that a JCP Diet member is suspected of an extramarital affair, or that the Okinawa governor smokes marijuana. The brother of the site’s operator is a Kanagawa Prefectural assemblyman who left the LDP in July 2021. When approached for an interview, the assemblyman denied any involvement, saying, “I’m not in touch with my brother and I am not involved in the website.” 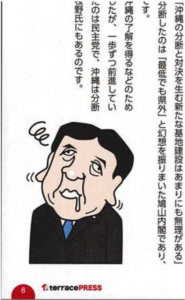 Is the LDP involved in Dappi? Critic Furuya Tsunehira, an expert on online discourse, says, “My personal impression is that [LDP] is involved.” His reasoning is that most Dappi tweets are limited to certain times of the day. Furuya says, “The netouyo (online right-wingers) love the LDP more than money. If they really love the LDP, they would tweet 24-7.”(Abridged)