The warships sailed eastward toward the Pacific Ocean, likely as part of “Naval Interaction 2021,” a joint maritime exercise the two navies are conducting this month.

This is the first time that Chinese and Russian warships are known to have passed the Tsugaru Strait together. The strait is between Japan’s main island of Honshu and the northern island of Hokkaido.

The narrowest point of the Tsugaru Strait is 19.5 km, or 12.1 miles, but the center part of the strait is designated as international waters — a Cold War relic that let American vessels carrying nuclear weapons pass through. By limiting Japan’s territorial waters to just 3 nautical miles from shore, as opposed to the customary 12, this allowed U.S. ships to pass without violating Japan’s “Three Non-Nuclear Principles,” of which one prohibits the introduction of nuclear weapons into Japanese territory.

The ministry said it first identified the ships Monday morning, around 110 km southwest of Okushiri Island, on the west side of Hokkaido. 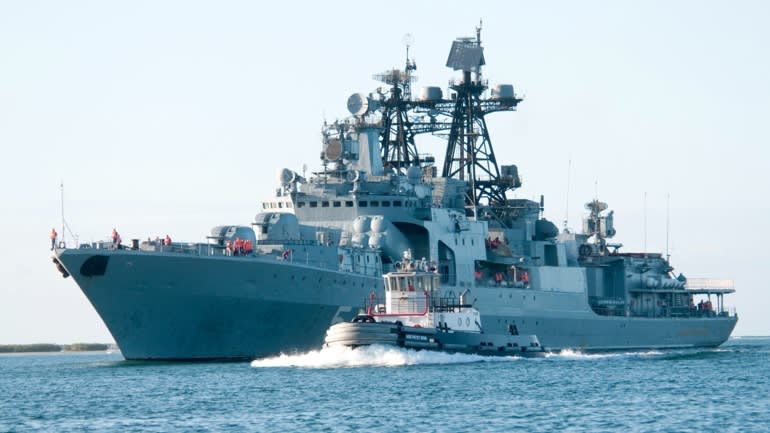 The Russian Navy’s Udaloy-class destroyer RFS Admiral Panteleyev arrives at Joint Base Pearl Harbor-Hickam to participate in the Rim of the Pacific exercise in June, 2012. (Photo courtesy of the U.S. Navy)

The Chinese ships were the same group that the ministry identified near Tsushima Island in Japan’s south on Oct. 11.

With the strait being international waters, the passage itself does not violate international law. The Maritime Self-Defense Force monitored the passage with a P-3C maritime surveillance aircraft and two minesweepers.

The Russian Ministry of Defense posted a video of the joint exercise.