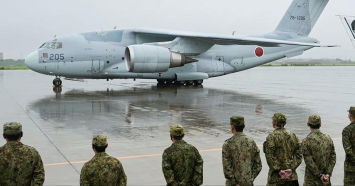 A transport airplane of the Air Self-Defense Force (ASDF) arrives at the Iruma Air Base in Saitama Prefecture on Sept. 3. The aircraft returned to Japan after successfully rescuing just a few Afghans who had worked for Japan.

It will soon be two months since the Taliban Islamic group seized control of the Afghan capital of Kabul on Aug. 15. The Japanese government was criticized for its handling of the crisis.

One of the reasons for the criticism was that the Japanese employees at the Japanese Embassy evacuated from Afghanistan and left the local staff behind. A fresh examination of the situation at the time raises questions as to how Japan should maintain diplomatic establishments abroad in unsafe areas and continue to carry out missions there.

On Aug. 17, 12 Japanese staffers of the Embassy departed Afghanistan for Dubai on a British military airplane. That completed Japan’s efforts to evacuate its nationals who wished to leave Afghanistan. But 500 or so Afghans who worked for the Japanese Embassy and the Japan International Cooperation Agency (JICA) and their family members were left behind.

As of Oct. 12, slightly over 300 of them had left Afghanistan either by air or by land, but others remain stranded in the country.

Japan had initially planned to send Self-Defense Forces (SDF) aircraft on Aug. 26 to rescue all of the approximately 500 Afghans there. But the plan was derailed due to the suicide attack that occurred immediately before the rescue attempt.

This gave rise to the criticism that it was unacceptable that only the Japanese nationals at the Embassy fled and the Afghan staffers were left behind.

After the fall of Kabul on Aug. 15, the United States, the UK, France, and Germany moved the functions of their embassies to the Kabul airport. At least until the suicide attack occurred on Aug. 26, their embassy staffers were working to get the Afghans out by cooperating with the militaries of their own countries and the U.S. military.

Why couldn’t Japan do the same? A close look at the situation reveals that simply having the intention to rescue the Afghan staff was not enough. It turned out that unlike the United States, the UK, France, and Germany, the Japanese workers at the Embassy were effectively “unarmed.”

Major Western nations, including the United States, the UK, France, and Germany, have engaged in warfare in Afghanistan as members of the North Atlantic Treaty Organization (NATO) for years. After the fall of Kabul, NATO set up a safe hub in the airport and relocated its command headquarters there. Amid tight security provided by the U.S. military and other forces, NATO assigned some 800 staffers there. Embassy staff of the UK, Germany, and France were able to remain in the airport because they could depend on the safe hub.

But Japan could not use the hub because it is not a NATO member. At one point, the Japanese nationals stationed at the Japanese Embassy considered remaining in Afghanistan. But due to the deteriorating security situation and terrorist threats at the airport, they were barely able to secure their own safety.

The Japanese government also considered asking the United States for the use of space at the U.S. military facility in the Kabul airport and stationing the top official of the Japanese Embassy there.

But the U.S. military was already stretched thin as it had to maintain the security of the airport, which was in a tense situation, and evacuate American nationals, who numbered in the hundreds of thousands. Japan was reportedly told by the United States that “it would be difficult to guarantee the safety of the top Japanese Embassy official in the airport.”

The situation was the same for South Korea, which temporarily evacuated its embassy workers from Afghanistan.

On Aug. 24, Japan again sent the Japanese government officials and Japanese nationals stationed at the Embassy to the Kabul airport accompanied by an elite SDF unit after securing their safety on its own.

Japan also has diplomatic missions in volatile Middle Eastern and African countries. In 2011, the residence of the Japanese ambassador came under an attack in Cote d’Ivoire amid a civil war and the ambassador and staff made a narrow escape when they were rescued by the French military.

How can Japanese diplomatic missions abroad utilize the lessons they learned in Afghanistan? Evacuation plans not only for the Japanese staff but also for the local staff and repeated evacuation drills with the Japanese government are essential. Still, unexpected events are entirely conceivable.

There is no guarantee that Japan will be able to dispatch SDF aircraft like it did for Afghanistan. Thus, Japan needs to coordinate with Western countries on a routine basis and make arrangements for receiving protection in emergencies. That also requires forging connections with the militaries of other countries.

Cooperation not only with the United States but also with the UK and France are also important. A Japanese diplomatic source says, “France conducts anti-terrorism operations in the Middle East and Africa and stations its military in some areas as a former suzerain state.”

Japan has expanded its international contributions, including economic aid, the UN Peace Keeping Operations (PKO), and post-disaster assistance. In such unsafe countries as Myanmar, Iraq, Haiti, and South Sudan, Japan is currently providing aid. Further anti-crisis measures are indispensable to continue these activities for a long period of time.