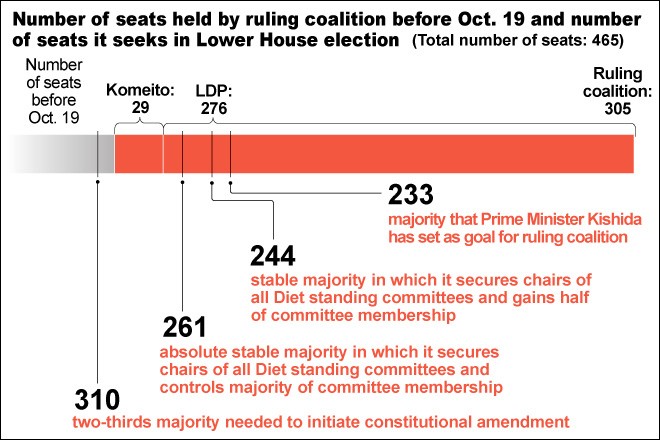 Campaigning for the Lower House election began on Oct. 19 with the ruling and opposition camps both claiming to be the best choice to end the COVID-19 health crisis and rebuild the battered economy.

“The nation stands at a crossroads because of COVID-19,” Prime Minister Fumio Kishida said in his first campaign speech in Fukushima city. “This is the start of the election to choose what to do next.”

Kishida picked Fukushima for the speech because he said Japan could not be rebuilt without first reconstructing the areas hardest hit by the 2011 Great East Japan Earthquake and tsunami.

“I want to distribute the fruits of economic growth in the form of higher salaries,” Kishida said.

He also showed the notepad in which he jotted down comments from members of the general public he has met.

“I have written down what they have said, and I want to cooperate with the public to set a course for the future,” he said.

Natsuo Yamaguchi, the head of Komeito, the Liberal Democratic Party’s junior coalition partner, spoke in Kawasaki and said the ruling coalition was the only choice for leading the government.

He also criticized the opposition parties’ election cooperation strategy to collectively back a single candidate in about 200 single-seat districts.

“It is not clear what the alternative form of government would look like,” Yamaguchi said.

Yukio Edano, the leader of the main opposition Constitutional Democratic Party of Japan, said Japan needs such a change in government.

“Let us return to a politics that is honest and change the politics that has become old-fashioned,” he said in his speech in Matsue, Shimane Prefecture, in western Japan.

Edano said if the opposition gains control of the government, it would strive to create a society in which everyone was in the middle class, and economic benefits would be redistributed so that everyone’s income would increase.

Kazuo Shii, the head of the Japanese Communist Party, stood in front of JR Shinjuku Station in Tokyo to deliver his first campaign speech.

“This is a historic election to choose whether a government of the LDP and Komeito that does not listen to the public should continue or whether a new government under the opposition can be created and use the voices of the public to its advantage.”

He added that the government could not be left in the hands of the Kishida administration that has taken over from his two predecessors, Shinzo Abe and Yoshihide Suga.

Osaka Mayor Ichiro Matsui, who leads Nippon Ishin (Japan Innovation Party), spoke in his home city and said, “We will cut wasteful government spending to come up with the revenues for a redistribution policy.”

He asked voters to give his party a chance to conduct the administrative and fiscal reform of Osaka on a nationwide scale.

Yuichiro Tamaki, the chief of the Democratic Party for the People, gave his first campaign speech in Nagasaki city.

“We must place priority on rebuilding a damaged economy, livelihoods and society,” he said.

Taro Yamamoto of Reiwa Shinsengumi was also in front of JR Shinjuku Station at the start of campaigning.

“Even before COVID-19 hit, many people were suffering due to an economy whose foundation has been sinking,” he said.

He called for aggressive government spending to prevent a collapse of society.

Mizuho Fukushima of the Social Democratic Party spoke in Hiroshima city and said, “We want to create a society that protects lives and human rights.”

She called for moving away from nuclear power and allowing married couples to choose separate surnames.

Takashi Tachibana spoke in front of the Tokyo headquarters of his nemesis, Japan Broadcasting Corp. (NHK).

His party wants “to protect the public from NHK” and has pledged to “destroy” the broadcaster to get rid of the mandatory subscription system.