NEW YORK — U.S. Secretary of State Colin Powell was with President George W. Bush in the Oval Office when aides came bearing news of a major development in Iraq.

It was April 9, 2003, and the Iraq invasion by American forces — not even a month old — was reaching a major milestone.

The two came out to a room with four TV screens and watched scenes of Iraqi civilians and U.S. soldiers toppling the statue of President Saddam Hussein in Baghdad’s Firdos Square. The strongman’s 24-year grip over the country was over.

While Bush celebrated with a fist pump, Powell, the former Army general and chairman of the Joint Chiefs of Staff, watched with mixed emotions. Two months earlier, he had appeared before the U.N. Security Council to make the case that Saddam was hiding weapons of mass destruction, but had failed to secure a U.N. resolution on Iraq.

Despite this, the U.S. went to war with what it characterized as a coalition of the willing, and Defense Secretary Donald Rumsfeld oversaw the conduct of the battle under a concept that emphasized speed and airpower while downplaying large ground forces.

Rumsfeld’s approach was a rejection of the Powell Doctrine — the use of an overwhelming force — which then-Gen. Powell had created in the run-up to the 1990-91 Gulf War.

In many ways, it was a day that represented the struggles that Powell went through as Bush’s top diplomat.

Powell, the 65th and the first Black secretary of state, died Monday at 84. U.S. President Joe Biden said in a statement that he was a man who “embodied the highest ideals of both warrior and diplomat.” A visitor walks near the Washington Monument at sunrise as U.S. flags are lowered to half-staff in observance of the death of Colin Powell, along the National Mall in Washington on Oct. 19.   © Reuters

Antony Blinken, the 71st secretary of state, said Monday that future military leaders and diplomats will study Powell’s work, like the Powell Doctrine.

“He was a man of ideas, but he wasn’t ideological. He was constantly listening, learning, adapting,” Blinken said.

But perhaps it was that nuanced approach that put him at odds with the highly idealistic neoconservative camp of the Bush administration, led by Vice President Dick Cheney, Rumsfeld and Deputy Defense Secretary Paul Wolfowitz. Bush ultimately listened to the hawks and their ideology-driven solutions — such as democratizing the Middle East to secure peace — in the post-9/11 days.

For Powell, the struggle continued. In May, he flew to France for a meeting of foreign ministers of the Group of Eight wealthy nations, making him the highest ranking Bush administration official to travel to Europe since the heated battles in the Security Council earlier in the year.

On the morning of May 23, 2003, Powell sat down for breakfast at a Paris hotel with Dominique de Villepin, the former French foreign minister about to become prime minister, who had been one of the strongest critics of the Bush administration’s rush to war.

It was just the two of them, with no translators.

It was a “good meeting,” Powell told reporters after the 45-minute breakfast. But there in the room, on the round table, were strawberries and yogurt left completely untouched. It signaled the heated exchange of words during the closed session. At the State Department, Powell was a beloved figure. He was told by his predecessor Madeleine Albright not to trust the career diplomats too much, but Powell was intent on making use of the professionals rather than bring in his own cronies.

His first major test case came a little over three months into the job, when a U.S. Navy EP-3 signals intelligence aircraft collided with a Chinese navy fighter jet in midair, about 110 km away from the southern Chinese island province of Hainan on April 1, 2001.

The EP-3 was forced to make an emergency landing on Hainan and 24 crew members were detained.

To solve the diplomatic crisis and to retrieve the crew, there was talk of appointing a special envoy, such as former President George H.W. Bush.

He talked to Yang Jiechi, China’s current top diplomat who was then the Chinese ambassador to Washington, back and forth during an overnight negotiation. When he learned that Chinese Foreign Minister Tang Jiaxuan was traveling in South America, he sent local embassy staff to knock on the Chinese Embassy door to inform him they needed to speak. “At that time, the Chinese didn’t have communications on their airplane,” Boucher recalled.

The Chinese said they would agree to return the crew if the U.S. side wrote a letter of apology. Through the negotiations, Powell and the Chinese side agreed on the wording — the so-called letter of the two sorries — which used the words “very sorry” but did not explicitly say that the U.S. side was responsible for the incident. It was diplomacy at work.

“Most of us who were in the service at the time, and particularly those who were watching him handle his first big problem, for us it was a sign about how he really valued diplomacy, and how committed he was to using diplomatic tools to solve the problems. And he did,” Boucher said. 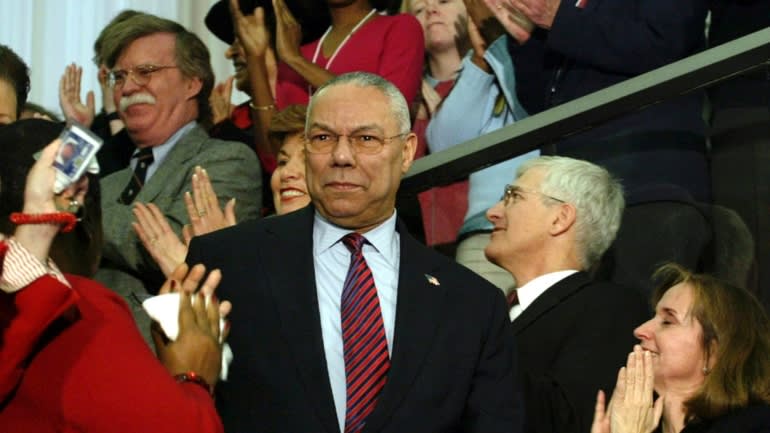 State Department employees greet Colin Powell as he arrives for his farewell address on Jan. 19, 2005.   © Reuters

Boucher said he would go to Powell’s office on the seventh floor of the building every day before the spokesperson’s daily briefing, even if it was for two minutes. “I’d say, ‘this is new today, here’s where we’re headed on it, is that OK? What do you think?’ And he’d say do this, do that, so that I could walk out with a lot of confidence.”

Powell brought back morale to the State Department, Green said. “The diplomats adored him. I traveled with him to Asia and he was excellent at diplomacy.”

As CEO, he spared no effort to increase the State Department’s budget, in part to make sure there were enough staff learning Arabic, Mandarin and various languages to arm the diplomatic corps with the skills needed for the job.

But after 9/11 and the Iraq War, he and his State Department colleagues could only watch as Pentagon officials elbowed their way into diplomacy.

Appearing on CNN Turk in May 2003, Wolfowitz chastised NATO ally Turkey for not joining the Iraq War.

He said it was wrong for Turkey to try to improve relations with neighbors Iran and Syria. “Anything that Turkey does with Syria or does with Iran should fit into an overall policy with us, of getting those countries to change their bad behavior,” he said.

A State Department official said to this reporter in disbelief, “Who does he think he is?”

Powell did struggle with Rumsfeld for influence on national security policy, said Green, now senior vice president at the Washington think tank Center for Strategic and International Studies. But on Asia policy, “it was Powell who probably had the greater influence because allies and partners liked and trusted him.”

Green said the EP-3 incident “showed how well his team at the State Department, especially Deputy Secretary Richard Armitage and Assistant Secretary of State for East Asian and Pacific Affairs James Kelly, understood and was connected to the region.” Boucher recalls Powell’s first meeting with Koizumi in Japan. “We did the whole meeting through interpreters, and at the end of the meeting we stood up and Koizumi said a few words to Powell in English.”

Koizumi: No, not really. But I had a good teacher.

Koizumi: Elvis Presley. I learned English from listening to Elvis records when I was a kid.

“We thought that was wonderful,” Boucher said. “It gave them an immediate sort of rapport. They always got along together. They always could work together and talk and solve problems. They had something very much in common.”

Ereli called Powell “the last of a generation that understood the nature of global strategy, the interplay between force and diplomacy, how the two can be used together to advance the national interest and how the United States relates to the rest of the world.”

The newer generation of Blinken, former Secretaries of State Mike Pompeo and Hillary Clinton do not have those formative experiences, Ereli added.