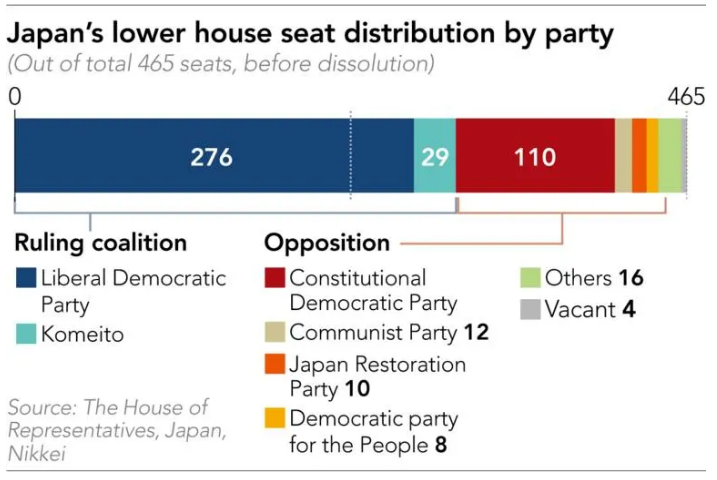 TOKYO — Japan’s Liberal Democratic Party and its coalition partner Komeito are within reach of a majority in the upcoming lower house election, the latest poll by Nikkei shows.

But the race remains tight, with the ruling party in a dead heat with its rivals for about 40% of the 289 single-seat constituencies.

The Oct. 31 election will be the first since LDP leader Fumio Kishida was elected Japan’s newest prime minister and will follow a 12-day campaign, which officially kicked off on Tuesday.

More than 1,000 candidates are vying for 465 seats. The Constitutional Democratic Party is the LDP’s main rival. The CDP has joined forces with smaller groups like the Japanese Communist Party to shore up their chances of winning.

The Nikkei poll showed that the ruling party remains in a heated race with its competitors in single-seat districts. In a telephone poll conducted nationwide on Tuesday and Wednesday that received 172,227 valid responses, about 20% of voters were still undecided on their choices for single-seat districts and proportional representation seats.

More than half of the single-seat constituency either favored or showed high probability of an LDP win. The ruling party is gaining ground particularly in such prefectures as Toyama, Yamaguchi and Kochi.

Since returning to power in 2012, the LDP has won over 60% of the lower house seats in all three subsequent elections. For the ruling party, maintaining a single-party majority — that the LDP has managed to keep for the past nearly nine years — is a crucial goal.

Kishida has set a target of 233 seats for the ruling coalition while partner Komeito could see a gain from the 29 seats it held before the election. Most of the nine Komeito candidates are leading in single-seat districts, and the party seeks to increase the number of seats through proportional representation.

The LDP-Komeito coalition aims for an “absolute stable majority” of 261 seats, which would allow the group to chair and maintain a majority of seats in all permanent lower house committees.

Five opposition parties, including the Yukio Edano-led CDP, have cooperated in the election by backing a single candidate in 70% of the 289 single-seat districts, which has intensified competition with the LDP-Komeito coalition.

The CDP is looking at increasing its seats from the 110 it held before the start of the election. The party is either favored or showed high probability of a win in some single-seat districts in prefectures like Hokkaido, Saitama, and Aichi. However, in terms of proportional representation, it remains unclear whether the CDP will be able to maintain the seats it previously held.