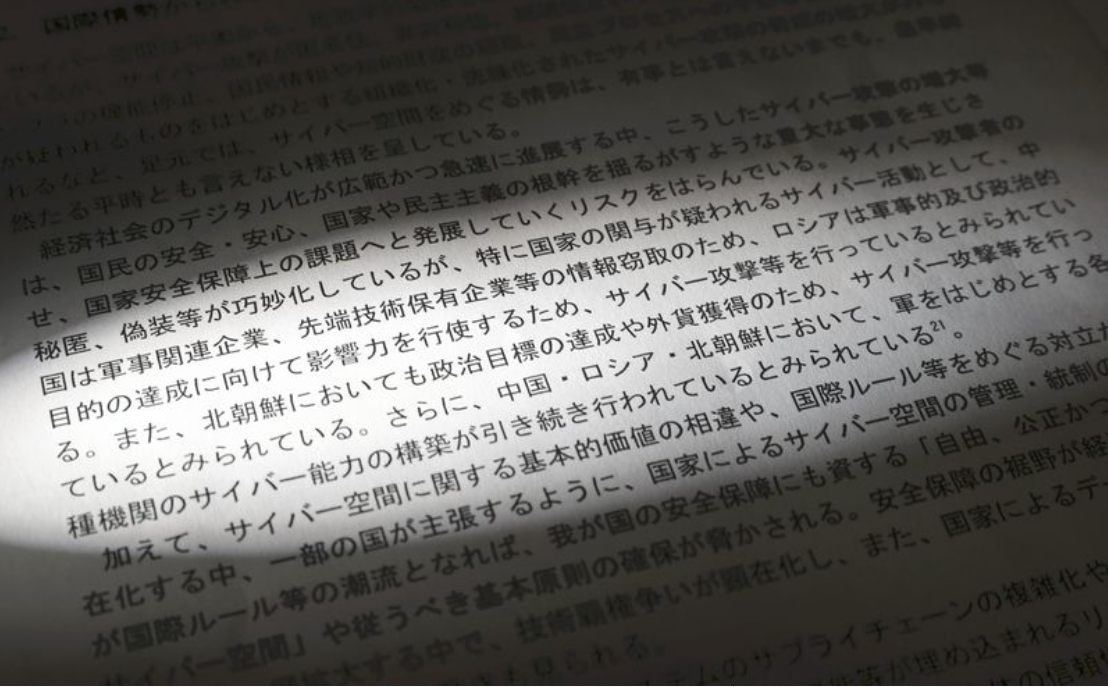 The Yomiuri Shimbun / In the government’s cybersecurity strategy, China, Russia and North Korea are named as nations suspected of being involved in cyber-attacks.

The government has started disclosing the names of groups linked to major cyber-attacks when the involvement of foreign states is suspected, bringing Japan in line with the United States and European countries.

Released just before the opening of the Tokyo Olympics, the timing of the statement — which was issued at the same time as similar statements by the United States, Britain, Australia, and the North Atlantic Treaty Organization (NATO) — attracted global attention.

The U.S. Federal Bureau of Investigation and other entities discovered that a group of hackers associated with the Chinese authorities was suspected of carrying out cyber-attacks across the world. They also claimed that the attacks involved ransomware, malicious software designed to block access to a computer system until a sum of money is paid.

A senior official of the National Police Agency said the origin of a cyber-attack is usually cleverly concealed so attacks rarely lead to criminal charges. However, through analysis of the virus and its method of operation, the involvement of a state can be deduced in some cases.

Public attribution is considered to be an effective countermeasure and has been used actively by the United States and European countries since around 2017 to demonstrate their investigative capabilities and deter attacks.

The Japanese Foreign Ministry released statements mentioning cyber threats involving North Korea in 2017 and China in 2018, in conjunction with statements criticizing these countries that were issued by the United States and others. However, it cannot be said that the measures were proactive.

The changing international situation is behind Japan’s shift in stance.

Japan has decided that it needs to act with the United States and its allies, which have been stepping up pressure on China and Russia.

A March report compiled by the NPA’s cybersecurity policy council stated that Japan “should proactively disseminate information on criminal methods and trends when they are discovered.”

In April, then NPA Commissioner General Mitsuhiro Matsumoto said at a press conference that Unit 61419, a strategic support unit of the People’s Liberation Army based in Qingdao in China’s Shandong Province, was probably involved in attacks on the Japan Aerospace Exploration Agency (JAXA) and other entities in 2016 and 2017.

It is believed to be the first public attribution by the NPA.

The government’s cybersecurity strategy for the next three years, which was approved by the Cabinet on Sept. 28, similarly names China, Russia and North Korea, clearly stating that they are believed to be carrying out cyber-attacks.

Cybersecurity policy expert Motohiro Tsuchiya, a professor at Keio University, said: “Superiority in cyberspace will increasingly be directly related to security. Japan needs to further deepen cooperation with other countries and use public attribution effectively, among other efforts.”

Next fiscal year, the NPA plans to establish a bureau to oversee cyberspace countermeasures and a cyber investigation squad under the bureau’s direct supervision.

A dedicated network will be established to connect the cyber bureau and the cyber squad with the metropolitan and prefectural police across the nation so that they can remotely conduct joint analysis.

The strengthening of the system is to enable Japan to actively participate in international joint investigations by authorities of various countries.

“We want to establish an organization as early as possible that can deal with the increasing sophistication of cyber-attacks,” said a senior NPA official.