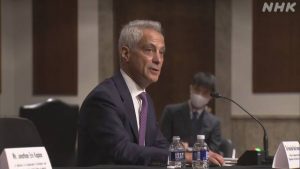 NHK, NTV, and TV Asahi reported on Wednesday’s congressional hearing for former Chicago Mayor Rahm Emanuel, who has been nominated by President Biden as the next U.S. Ambassador to Japan. NHK said Ambassador-nominee Emanuel stressed the importance of the U.S.-Japan alliance in dealing with China, which the Biden administration views as the most serious competitor against the United States. NTV said Emanuel expressed strong concern about China by saying: “China aims to conquer through division.” Emanuel also reportedly expressed his intention to further strengthen the bilateral alliance if he is confirmed by saying: “For more than 60 years the partnership between the United States and Japan has been the cornerstone of peace and prosperity in a free and open Indo Pacific…. If confirmed, my top priority would be to deepen these ties.” NHK added that Emanuel served as White House Chief of Staff under the Obama administration and enjoys close ties with President Biden.

Newspapers and wire services also covered the Senate hearing, with Jiji and Kyodo focusing on remarks made during the session by former Ambassador to Japan Hagerty in which he pressed Emanuel to address the plight of former Nissan executive Greg Kelly if he assumes the post. Senator Hagerty called Japan’s judicial system “outdated,” emphasizing that the businessman from his home state of Tennessee has been subjected to what he called “unfair and cruel treatment” for several years. Hagerty urged the nominee to lobby the Japanese side to swiftly release Kelly. Emanuel reportedly stated in reply that he will deal with the matter as a “top priority.”

Mainichi also reported online that Senator Menendez, the chairman of the Senate Foreign Relations Committee, expressed dissatisfaction at Emanuel’s confirmation hearing with Japan’s handling of the Hague Convention on the Civil Aspects of International Child Abduction. The paper wrote that Emanuel reportedly responded by saying the convention should be implemented.