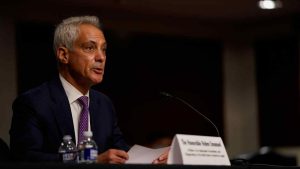 All national dailies reported on Wednesday’s Senate hearing for former Chicago Mayor Rahm Emanuel, who has been nominated by President Biden as the next U.S. Ambassador to Japan. Sankei front-paged a report about the hearing saying that Ambassador-nominee Emanuel expressed his expectations for Japan to deepen its alliance with the United States and beef up its defense capabilities. Yomiuri wrote that Emanuel expressed his readiness to make deepening the U.S.-Japan alliance his top priority because the bilateral partnership is the cornerstone of peace and prosperity in a free and open Indo-Pacific. Asahi also quoted him as saying that his top priority would be to deepen the ties between the two nations as they confront their common challenges.

Nikkei speculated that Emanuel’s comment that increasing Japan’s defense spending is indispensable for the U.S.-Japan alliance was aimed at urging the GOJ to enhance Japan’s defense capabilities to boost the alliance’s deterrence against China. The paper wrote that the President’s nomination of a “heavyweight” like Emanuel who has connections with both the White House and Congress as the next envoy to Japan is evidence of Japan’s increasing strategic importance for the United States as an ally geographically close to China. Mainichi also wrote that the Ambassador-nominee expressed his expectations for a drastic increase in Japan’s defense spending.

Sankei quoted Deputy Chief Cabinet Secretary Isozaki as telling reporters at a regular press briefing on Thursday that Ambassador-nominee Emanuel expressed his readiness to further strengthen the ties between the United States and Japan and that Japan will closely cooperate with him in enhancing the bilateral alliance and achieving a free and open Indo-Pacific. Mainichi quoted Isozaki as saying: “We would like to work closely with Ambassador-nominee Emanuel to strengthen the U.S.-Japan alliance. We would welcome him.”