The ruling Liberal Democratic Party has maintained a comfortable lead as the preferred party among voters to lead the government after the Oct. 31 Lower House election, an Asahi Shimbun survey found. 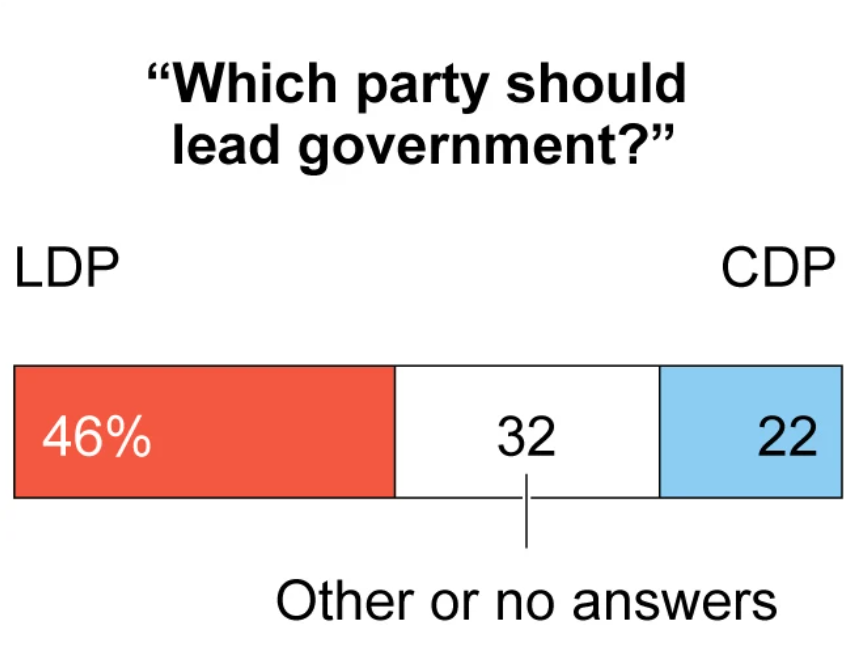 Forty-six percent of respondents in the nationwide telephone survey conducted on Oct. 19-20 said they want the LDP to remain in power, compared with 22 percent who said the main opposition Constitutional Democratic Party of Japan should take over government.

Thirty-two percent of respondents chose other parties or did not give an answer to the question.

Among unaffiliated voters, the gap narrowed: 27 percent picked the LDP and 23 percent preferred the CDP.

But 50 percent of unaffiliated voters did not give a clear stance for the question.

The CDP’s prospects of achieving its announced goal of wresting power from the LDP in the Oct. 31 vote appear dim early in the campaign.

The CDP’s predecessor, the Democratic Party of Japan, took over government from the LDP in the 2009 Lower House election.

In the Asahi survey conducted right before official campaigning began for that election, 49 percent of voters picked the DPJ for the question of which party should lead the government.

Twenty-one percent selected the LDP at the time. 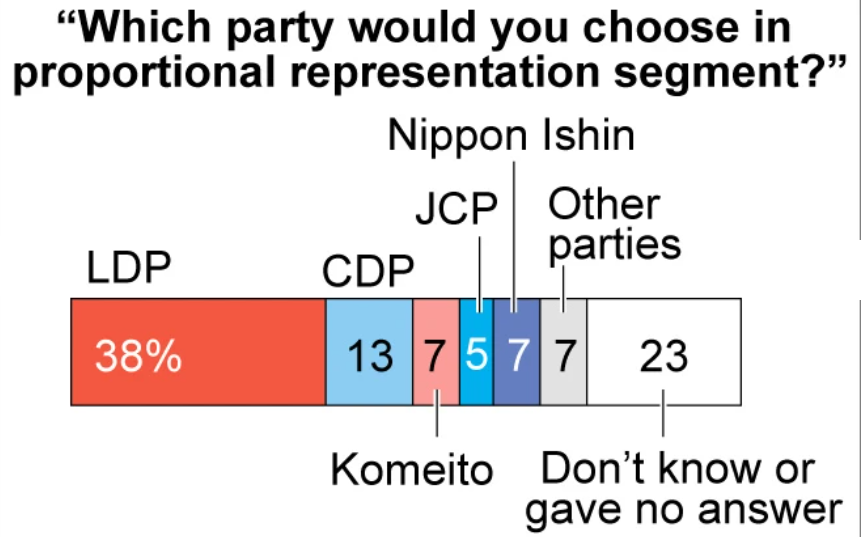 In the latest survey, 38 percent chose the LDP as the party they would vote for in the proportional representation segment of the election, compared with 13 percent for the CDP.

For the same question in a survey taken right after the Cabinet of Prime Minister Fumio Kishida was formed earlier this month, 41 percent selected the LDP and 13 percent picked the CDP.

Among unaffiliated voters, the LDP maintained an edge over the CDP for the question in the latest survey, at 22 percent to 12 percent, nearly unchanged from 22 percent to 13 percent in the previous survey.

In the August survey held before Kishida’s predecessor, Yoshihide Suga, announced his resignation, unaffiliated voters were evenly split at 16 percent each for the two parties.

The CDP has failed to gain ground despite voters’ overall disappointment with the performances of the administrations led by the LDP and Komeito, a junior partner in the coalition, over the last four years until the terms of Lower House lawmakers ended this month. 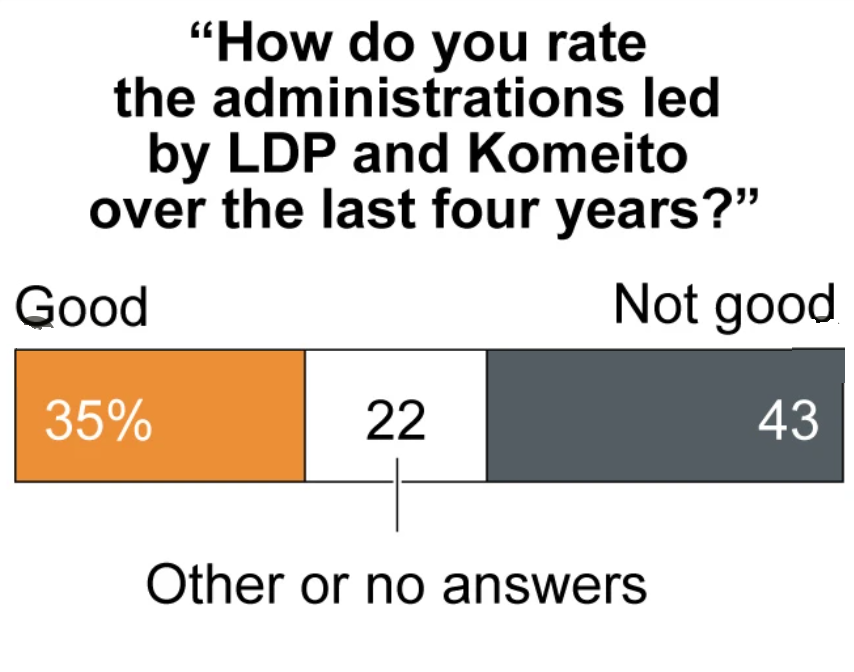 The ratio of those who disapproved of the performances was 43 percent, compared with 35 percent who gave positive marks.

For the current administration, the Kishida Cabinet’s approval rating was down 4 points from the previous survey to 41 percent. The disapproval rating rose to 26 percent, up 6 points.

As for the most crucial issue in the Oct. 31 election, 29 percent of voters picked “social security,” according to the survey.

It was followed by: “economy and employment,” at 27 percent; “measures to contain the novel coronavirus,” at 18 percent; “diplomacy and national security,” at 9 percent; “money and politics,” at 8 percent; and “nuclear power and energy,” at 4 percent.

The CDP and other opposition parties are trying to woo voters by emphasizing plans to reduce the consumption tax rate, at least temporarily, to ride out the economic fallout from the public health crisis.

The survey showed that 57 percent of respondents were in favor of maintaining the current rate of 10 percent, exceeding the 35 percent who preferred a lowered rate, at least temporarily.

Fifty-four percent of voters who chose the CDP in the proportional representation segment supported the status quo on the tax rate, while 42 percent of those who cited the Japanese Communist Party and 56 percent of respondents who picked Nippon Ishin felt the same way.

As for cooperation among the opposition bloc in fielding unified candidates in single-seat constituencies, 45 percent of respondents hailed the effort, compared with 25 percent who gave the opposite assessment.

The survey also found that 47 percent of respondents gave a thumbs-up to the LDP’s campaign promise to amend the Constitution to spell out the legal status of the Self-Defense Forces, compared with 32 percent who were against it.

The results were in sharp contrast with the survey taken four years ago right after official campaigning for the previous Lower House election kicked off. In that survey, 37 percent favored constitutional revisions while 40 percent were opposed to amendments.

Women tend to be more cautious about revising the pacifist Constitution, according to the survey.

Among men, 60 percent supported the LDP’s move and 30 percent rejected it.

But among women, 35 percent each were in support and opposition of the LDP’s revision plan.

The survey was conducted by contacting both landline telephone numbers and mobile phone numbers selected at random by computer.

It received 1,181 valid responses, or 57 percent, of the 2,063 landline numbers of households with at least one eligible voter each contacted in the survey.

There were 1,926 valid responses, or 45 percent, from 4,261 mobile phone numbers of eligible voters that were called. The valid responses totaled 3,107.